Taylor Ricketts, Rory Waterman, and Christopher Francklyn are new UVM Fellows of the American Association for the Advancement of Science 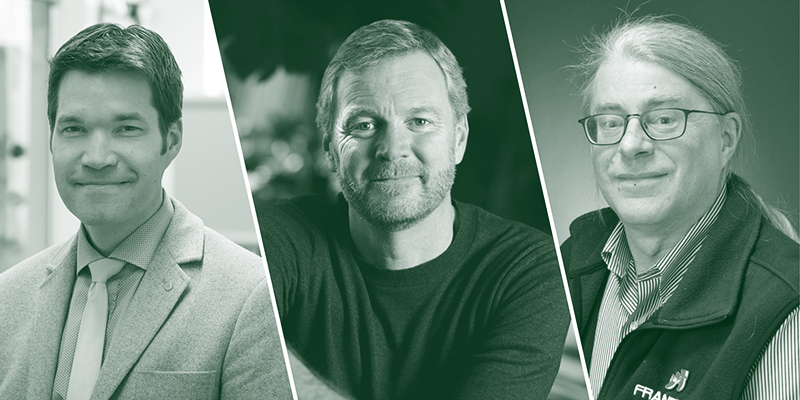 Three University of Vermont professors have been named Fellows of the American Association for the Advancement of Science (AAAS), the world’s largest multidisciplinary scientific society, for their outstanding contributions to science.

AAAS, which publishes cutting-edge research through its Science journals, awards fellowships based on researchers’ distinguished efforts to advance science or its applications. New AAAS Fellows will be announced in Science magazine on Nov. 27. A virtual induction ceremony will be held on Feb. 13, 2021.

In his research, Taylor Ricketts focuses on one critical question: how do we meet the needs of people and nature in an increasingly crowded, changing world? He is a pioneer in the field of ecosystem services, which quantifies the benefits that nature provides to people. Consistently among the world’s most cited researchers, Ricketts’ over 130 scientific publications range from investigations of climate impacts on global crop pollination to analyses of the economic and health benefits provided to humans by forests, urban parks, wetlands, reefs, and other natural areas. He has co-authored and co-edited two UN-sponsored efforts to assess global ecosystems and their contributions to human wellbeing.

Ricketts, who leads the Gund Institute for Environment, was elected as an AAAS Fellow for “distinguished contributions to the fields of ecology and conservation, particularly for quantifying ecosystem services and using that understanding to inform management efforts.”

Rory Waterman has been developing a research program since 2006 to study inorganic chemistry and catalysis, which increases the efficiency of chemical reactions. Waterman’s research has explored catalysis as a means toward more efficient utilization of phosphorus as a finite resource as well as chemical storage media for hydrogen as an alternative fuel. In 2011, he co-founded the New Faculty Workshop in Chemistry with over 500 participants to date. Waterman’s research in inorganic chemistry and catalysis has garnered significant recognition, including an NSF CAREER Award, Alfred P. Sloan Fellowship, Cottrell Scholar Award, Humboldt Fellowship, and Fellowship in both the American Chemical Society and Royal Society of Chemistry.

Waterman was elected as an AAAS fellow for “innovative research in synthetic main group chemistry, particularly bond formation catalyzed by transition metals, and his work developing the careers of chemistry faculty.”

For three decades, Christopher Francklyn has been investigating the machinery of protein synthesis and how mutations in the genes that encode these components function and can lead to complex human diseases. With longtime funding from the National Institutes of Health (NIH), he has studied the roles of these enzymes in such areas as cancer and inherited neurological diseases, collaborating with scientists across the U.S. and world. Francklyn, who joined UVM in 1991, helped organize and direct the University’s undergraduate program in biochemistry, and helped build UVM’s structural biology program. In addition, he has mentored dozens of UVM graduate and undergraduate students, held leadership positions on UVM’s Institutional Biosafety Committee, and served in editorial roles for national journals, and on several NIH Study Sections.

Francklyn was elected as an AAAS fellow for “paradigm shifting discoveries that link control of protein synthesis with biological mechanisms and regulatory compromises in cancer, blindness and deafness.”

AAAS was founded in 1848. AAAS Fellows are expected to maintain the highest standards of professional ethics and scientific integrity.

Election as an AAAS Fellow is an honor bestowed upon AAAS members by their peers. This year, 489 AAAS members have been awarded this honor for their scientifically or socially distinguished efforts to advance science or its application.