A Half-Century of Growth, Innovation and Efficiency at the Central Heating and Cooling Plant

During the summer of 2017, the Physical Plant celebrated a major expansion of the Central Plant, along with its 50-year anniversary.  Here's a timeline of major growth, innovation and efficiency improvements over the years. 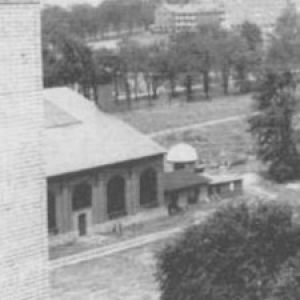 In 1969, the University Board of Trustees approved a new Central Heating Plant to be located inside the "Old Gymnasium".

The original building was constructed in 1901 and expanded in 1915. The east half of this historic building which once housed an indoor track and batting cages, was converted into the Central Heating Plant. This is how the facility got it's nickname "Cage."  The west side of the building was converted into the Royall Tyler Theater. The two functions-- a theater and a heating plant-- have remained neighbors ever since. 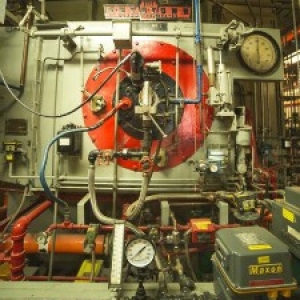 In 1970, the first two gas-fired 40,000 pound per hour Erie City "O" type watertube steam boilers were installed, and the first generation of underground distribution piping was laid out to deliver steam to many central campus buildings. These are aptly called Boiler #1 and Boiler #2.

In 1975, the boilers were retrofitted with dual burners to allow the use of natural gas or low sulfur No. 6 fuel oil. The oil was needed as a backup fuel source in the event that the natural gas supply would be interupted. The oil was stored in large underground tanks located on the south side of the theater near Morrill Hall. 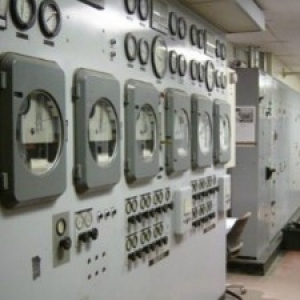 Boilers #3 and #4 were added. These are 40,000 pound per hour Babcock and Wilcox "D" type watertube boilers. There was an increased demand for steam resulting from the addition of a high temperature hot water (HTHW) heating system to the South Campus residence halls and Athletics Complex. At the time, adding South Campus to the central system was more energy efficient than keeping the aged 1960's stand-alone building boilers in operation. 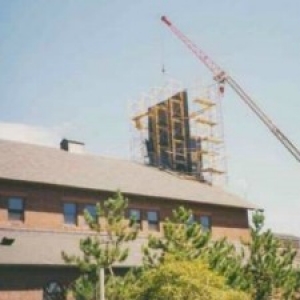 In 1991, Boilers #1 and #2 were retubed. In 1995, boiler controls were upgraded to permit the burning of natural gas and fuel oil simultaneously, further adding to the versatility of the Plant.

In 1997, the main boiler stack was extended in height and all of its brickwork was replaced. Additionally, a condensate polishing system was installed to remove impurities from the returning steam condensate, prior to it being reintroduced as boiler feedwater.

In 1998, the underground storage tank farm next to Morrill Hall was completely refurbished.

The two old tanks were filled with concrete and abandoned in place. Three new 50,000 gallon tanks were installed to hold a total of 150,000 gallons of backup fuel - enough to meet peak demand on cold winter days if the natural gas supply is interrupted.

In 1999, a fifth boiler is added for additional steam capacity

In 1999, to meet the University's growing appetite for steam, Boiler #5 was added. This is a 64,000 pound per hour "O" type Aalborg water tube boiler with a 95% guaranteed efficiency rating. This 5th boiler provided much needed additional capacity and the flexibility for scheduling maintenance and repairs even during cold winter months. 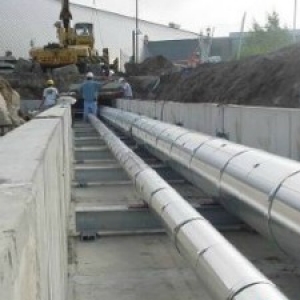 Between 2001-2004, a major utilities upgrade project was undertaken to improve system safety and efficiency and to address deferred maintenance issues. The South Campus HTHW system was entirely converted to steam and new steam stations were installed in south campus buildings. The HTHW equipment inside the Plant was removed to free up space for other needs. The multi-phase multi-year project included the installation of 5.3 miles of new and replacement underground steam piping becuase the original direct buried piping-- by now 25 years old-- was showing severe signs of deterioration. The new steam piping was laid out in pre-cast concrete trenches, wrapped with metal insulating jacket and sealed in vaults to protect from the elements.

In 2003-2004, a major controls upgrade was completed to convert the Plant from pneumatic controls to more modern "Delta V" direct digital controls, enabling plant operators to monitor all system performance and components on virtual display screens inside their control room. A major upgrade to the Plant's electrical service was also done.

In 2005, the Board of Trustees approved plan to develop a state-of-the-art centralized chilled water plant.

In 2005, as plans were underway for building a new modern student center and as the demand for central air conditioning was on the rise, the UVM Board of Trustees approved a plan to develop a centralized chilled water plant to meet the capacity needs for the Davis Center and to replace several existing inefficient decentralized chillers in other buildings.

In 2007, UVM installed the first ever steam-driven chillers in the State of Vermont.

In 2007, two 1,360 ton steam-driven York chillers were installed inside the Plant (in the space that once housed the HTHW equipment). These were the first ever steam-driven chillers in the State of Vermont.  The chillers are efficient because most of the energy used comes from excess steam from the boilers that would otherwise be wasted. The chilled water was initially piped to Davis Center, Bailey-Howe Library, Royall Tyler Theater and Old Mill/Lafayette halls. Chilled water piping was extended to supply Jeffords Hall, HSRF and Given buildings. 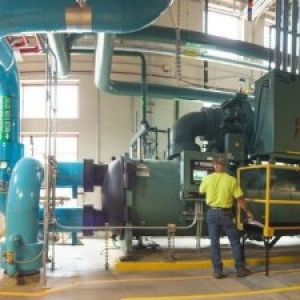 To accommodate the forever gowing campus, underground chilled water piping was extended to supply Jeffords Hall, HSRF and Given buildings.  In 2014, the boilers were converted from No.6 to No.2 fuel oil and the underground tanks were emptied, cleaned out and refilled with No.2 fuel

By 2015, the existing chiller capacity was "maxed out" and could not supply the future cooling needs for university buildings on the horizon: new construction of STEM complex and a new central campus residence hall, along with major renovations planned for Billings, Votey and Kalkin halls. The Physical Plant broke ground on a 7,500 square-feet addition to the historic building and a new brick-walled cooling tower enclosure (replacing the enclosure built just ten years earlier).

In 2017, the historic Plant was expanded and a new 1500 ton electric chiller was installed.

In 2017, a new 1500 ton Electric Chiller along with the associated pumps and auxillliary equipment was installed in the new space. With an eye towards the future, the building addition includes floor space to house another new chiller to meet the ever-increasing demand for air conditioning in new buildings.