UVM Leads the Largest Study of Climate Change in Vermont 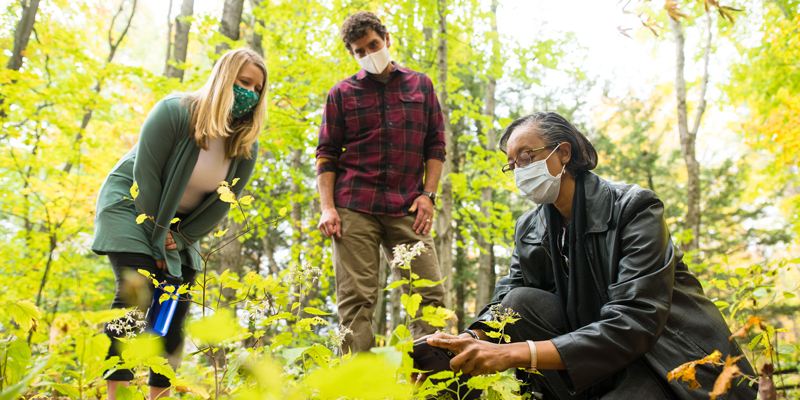 When it comes to stories about climate change in Vermont, it’s hard to beat Joe’s Pond in the Northeast Kingdom – where locals bet on when the ice melts.

Since the 1980s, folks have put a cinder block on the pond when it freezes. When the ice melts, the block sinks – unplugging an alarm clock that captures the exact time of the melt. There’s a clear pattern. The ice is melting earlier.

“When it comes to climate change in Vermont, the future is now,” says Gillian Galford, a UVM climate scientist leading the Vermont Climate Assessment 2020, an ambitious new study of climate change in the Green Mountain State.

“Vermonters may differ on how to deal with climate change, but they are personally connected to the climate,” says Galford, a researcher at UVM’s Gund Institute for Environment and the Rubenstein School of Environment and Natural Resources. “They’re not surprised that the ice is going off earlier. They say, ‘Yes, I noticed that.’”

People want a framework to make sense of these changes, adds Galford. That’s the goal of the Vermont Climate Assessment (VCA), she says, to pair science with stories, and help government and citizens understand the future impacts.

“We want to help people to feel more prepared, to make better decisions – and be more resilient to climate change,” says Joshua Faulkner, of UVM’s College of Agriculture and Life Sciences, who co-leads the project.

The UVM team includes Vermont State Climatologist Lesley-Ann Dupigny-Giroux (College of Arts and Sciences), Leigh Ann Holterman (Larner College of Medicine) and others. The project is supported by a Gund Institute Catalyst Award.

A warmer and wetter future

All the best climate science suggests Vermont will become a warmer and wetter place to live and work.

The Vermont Climate Assessment 2020 is using advanced climate research and data modeling to understand how rising temperature and precipitation – as well as more extreme events, such as droughts, and other climactic variables – will impact key sectors, including the economy, health, agriculture, water, energy, transportation, and forests.

Take the town of Rutland, Vermont, which now experiences 10-12 days of extreme precipitation a year, but used to encounter only four, says Galford, who worked with town planners.

“When they have that data—that Rutland is experiencing three times as much heavy precipitation—it’s something they can use to make decisions to spend tax dollars to plan roads and infrastructure,” says Galford. “They can plan for that trend to probably continue for the next decade or two, if not longer.”

And while ski resorts build bike trails to capitalize on longer summers, families spend more money in one winter weekend than they do in two weeks in the summer, Galford says. “That’s a big difference, economically.”

Working toward the next national analysis, Dupigny-Giroux says, “It’s important to look at local impacts, and how those can bubble up and affect national impacts. None of the changes — leaves changing earlier, ski industry impacts — occur just within our state borders. Impacts happen on a regional, continental, all the way up to the global scale.”

The 2020 Vermont Climate Assessment will update UVM’s pioneering state climate assessment in 2014, which was the first ever to provide state-level data similar to the national assessment. “The world is changing so fast. It’s important to update those findings so policy makers have the latest information.”

The team, who will release their findings in 2021, sees their project as a blueprint for other states assessing climate. “Our approach is relevant for other regions—like Vermont—small, tangible areas you can wrap your head around, not heavily resourced,” says Galford.

How Vermonters can participate

Have questions about climate change impacts on your local region or business? While the researchers are working to address decision makers’ questions, they also want to hear from everyday Vermonters.

The team has prepared an online form so anyone – town managers, government, concerned citizens, farmers, teachers – can submit questions about Vermont’s changing climate to direct the research or participate in the project.

“This idea of ‘co-producing’ research with stakeholders is crucial,” says Faulkner, because it builds trust. Sharing research is also core to UVM’s land-grant mission to generate solutions for Vermont and beyond.

“Vermonters have shown us they’re hungry for this information,” says Galford. “Most people are ready and willing to make changes, but having a bit more information helps them to feel secure in making decisions.”

Got a question for the Vermont Climate Assessment? Contact the team here.

Donate to the Vermont Climate Assessment.

How will climate change impact Vermont? That's the urgent question driving a UVM team of scientists leading the most comprehensive study of climate change in the Green Mountain State.