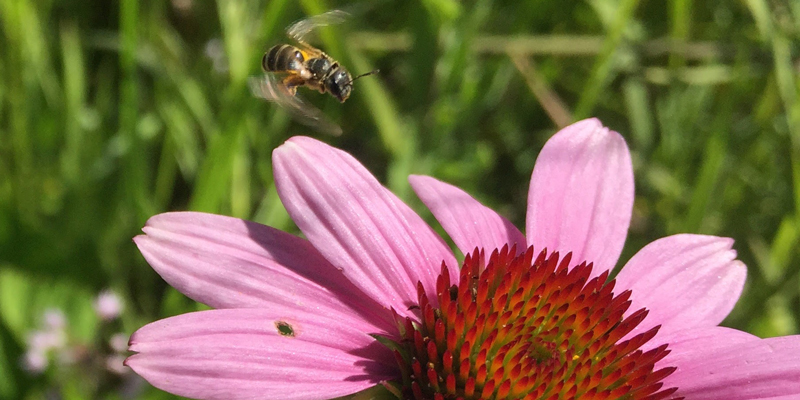 Many farmers are used to sharing big equipment—like tractors and other costly machinery—with neighboring farms. Sharing cuts costs, lowers the farmer’s debt load, and increases community. But big machinery might not be the only opportunity for farmers to reap the benefits of cost-sharing with their neighbors. New research suggests that the concept could also be applied to a more lively kind of agricultural resource—wild bees.

“Understandably, farmers with highly valuable crops don’t always want to give up plantable space to create habitats for wild bees, especially if their crops could be pollinated by a neighbor’s bees for free,” said Gund Affiliate Eric Lonsdorf, lead scientist for the Natural Capital Project at the University of Minnesota’s Institute on the Environment. “What we’re proposing is that those farmers providing bee habitat could be rewarded for doing so, to the benefit of all.”

The research, published in People and Nature, was a collaboration with University of Vermont scientists Taylor Ricketts and Insu Koh. The team applied their work to the fields of California’s Central Valley, one of the nation’s top agricultural areas. They combined wild bee ecology, crop values, and land ownership patterns to reveal the benefits to landowners of restoring bee habitats. In Yolo County, where bee-dependent crops like berries and nuts are worth thousands of dollars per acre, every inch of land counts.

“Bees don’t pay attention to land boundaries,” said Lonsdorf. “Farmers who choose to conserve habitat for bees on their lands are rarely recognized for the pollination benefits that they’re also providing to their neighbors.”

Creating wild bee habitat on farms can be as simple as letting a small area of land remain wild, which provides bees with a familiar sanctuary amidst rows of crops. But there is little incentive for farmers to create space on their own lands if the costs are greater than the benefits they’d receive from the bees, which means that few farmers choose to sacrifice precious planting ground for bee habitat. “We know that wild bees are essential pollinators for many of our crops, but they also require space nearby the crops to live, so we need to know where and how to invest.”

The researchers found that if 40 percent of landowners were to provide space for wild bee habitat, those landowners would lose one million dollars themselves, but generate nearly two and a half million for their neighbors. If the landowners were able to work together so that those who benefitted paid into the cost of the bee habitat, then everyone could come out ahead. Especially relevant in the equation is the size and patterns of farms clustered together, which the researchers say is often overlooked in this kind of analysis.

“This is about tackling the tragedy of the commons, the idea that what’s good for society isn’t always what’s good for a particular individual,” said co-author Taylor Ricketts, Director of the Gund Institute for Environment at the University of Vermont and co-founder of the Natural Capital Project. “This research shows how and where working together can really increase the benefits for everyone, and just as important: where it won’t.”

Ideally, the researchers would like to see their work help inform policies that encourage cooperation and resource sharing amongst farmers. They suggest that small groups of neighboring farmers come together, supported by local or national agricultural agencies like the United States Department of Agriculture, to decide how to allocate their land and bee habitats. This common-pool resource framework can be informed by the kind of analysis done by Lonsdorf and his colleagues so that farmers are able to make decisions that result in the highest benefits for the group.

In an increasingly volatile economy where small savings can go a long way, investing in shared natural resources like pollinators could be a good choice for small-scale farmers who grow high-value crops. “It’s an opportunity to overcome the tragedy of the commons,” said Lonsdorf. “And our goal is to spark the conversation.”