The College of Agriculture and Life Sciences announces the recipients of its college-wide student awards. 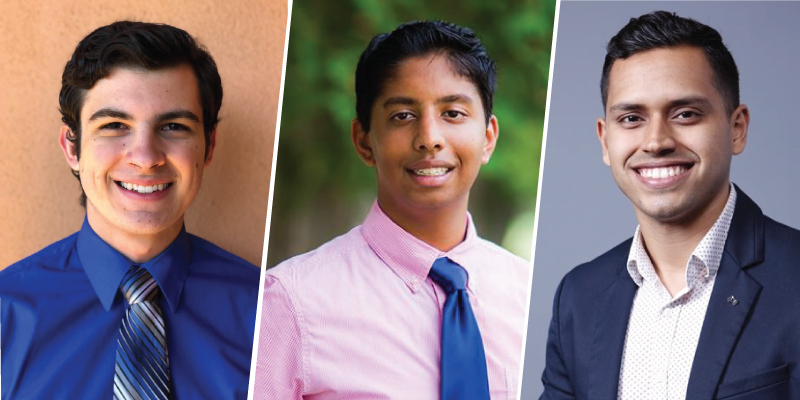 Matt Bompastore '20, Mehul Shah '21 and Luis Alexis Rodriguez-Cruz G'21 are the 2020 recipients of the College of Agriculture and Life Sciences’ college-wide student awards.

UVM’s College of Agriculture and Life Sciences has awarded its college-wide academic awards to three students who have demonstrated excellence through scholarship, research and service. The awards recognize one undergraduate junior, one senior and one graduate student who have distinguished themselves through their achievements and character.

Molecular genetics major Mehul Shah has been named the 2020 recipient of the Alexander McMahon Kende Academic Merit Award, presented in memory of Alex Kende, an exceptional student who graduated with honors from the UVM Biological Science program in 2000. He had been accepted to the UVM College of Medicine before a serious illness claimed his life. In his honor, the award provides a scholarship to a College of Agriculture and Life Sciences junior with an interest in medicine or biomedical research and has demonstrated exemplary character traits, leadership and service to UVM and the local community.

Growing up in neighboring South Burlington, Shah spent time on the UVM campus and fell in love with the opportunities it had to offer. Since arriving as a student, Shah has excelled in the classroom, as a student leader in the UVM Honors College and through his research on Toxoplasma gondii, a human parasite that can cause toxoplasmosis, with Gary Ward, professor of microbiology and molecular genetics. On a premedical track, Shah is also active in the UVM Medical Center community, having served as a patient access specialist and volunteer guide in the hospital, shadowed clinicians and worked in the UVM Medical Center Microbiology Laboratory.

“Mehul is an outstanding student and individual with the intellect and motivation necessary to excel in the biomedical field. He also embodies the caring and compassionate nature of Alex Kende, who I was very fortunate to know,” said Douglas Johnson, professor and vice chair of the Department of Microbiology and Molecular Genetics.

“Receiving this award is a huge honor and will allow me to focus even more of my time on academic and research work, in addition to being further motivated to challenge myself academically to make the most of my undergraduate time at UVM,” said Shah, who having just completed his junior year, will spend the summer studying for the MCAT and working at the UVM Medical Center. His goal is to attend medical school and eventually earn a Masters of Healthcare Administration, with a focus on working to increase access to health services for underserved populations.

Senior microbiology major Matt Bompastore has been named the 2020 Lawrence K. Forcier Outstanding Senior. Named in honor of Lawrence K. Forcier, former dean of the College of Agriculture and Life Sciences, the award recognizes the accomplishments of one senior each year who has excelled academically and exhibited exemplary character traits and leadership abilities as a member of, and in service to, the UVM community.

A UVM Honors College student graduating at the top of his class, Bompastore has maintained a near perfect GPA while also pursuing undergraduate research, volunteering and holding student leadership roles during his time at UVM. After a sophomore-year course sparked his interest in infectious diseases, Bompastore began working under the guidance of Matthew Wargo, professor of microbiology and molecular genetics, studying the bacteria Pseudomonas aeruginosa, which can cause severe and chronic infections in the human body. This fall, he'll be headed to Columbia University's Vagelos College of Physicians and Surgeons to continue on his path of becoming a physician.

Within a few weeks of his first year at UVM, Bompastore began volunteering at the UVMMC Children’s Hospital where he aimed to create a fun environment for young patients and their siblings. His positive, compassionate and nurturing character has led him to be involved in several volunteer endeavors during his time at UVM, says his advisor Doug Johnson, professor and vice chair of the Department of Microbiology and Molecular Genetics. In addition to weekly volunteering at UVMMC, Bompastore has been a subject tutor in the UVM Tutoring Center and engaged in an alternative spring break trip to West Virginia to help repair a storm damage home – an experience he says was one of his favorite weeks of college.

“Matt exudes unbridled positivity, and demonstrates, through his actions, an unqualified commitment to goodness,” said Cara Calvelli, health professions advisor in the UVM Career Center. “He accomplishes much while also nurturing the human relationships that ground him. He is an extraordinary ‘connector’ who warms a room by his presence, invites conversation with his openness, and leaves hope in his wake.”

Food systems doctoral student Luis Alexis Rodríguez-Cruz is the inaugural recipient of the College’s Graduate Research Excellence Award, established this year to recognize graduate students who have excelled in their research and scholarly accomplishments. A native Puerto Rican, Rodriguez-Cruz is conducting timely and critical research exploring how Hurricane Maria and subsequent extreme events have affected farmers and agricultural communities in the country, as well as the implications for food security and agricultural climate change adaptation in island nations.

“Luis has been a shining example of an accomplished researcher and engaged scholar leading timely research in Puerto Rico and scientific communication and outreach across the United States,” said Meredith Niles, assistant professor in the Food Systems Program and Rodríguez-Cruz’s Ph.D. advisor.

“I believe that his research will significantly contribute to advance research on climate change impacts on food systems, as well as provide practical insights to support communities on the ground,” added Ernesto Mendez, professor of agroecology and chair of the Department of Plant and Soil Science.

Rodríguez-Cruz has been recognized for his work both at UVM and globally, receiving the first place prize in social sciences graduate student presentations at the American Association for the Advancement of Sciences (AAAS) annual conference in February. In addition to his scholarly accomplishments, Rodríguez-Cruz has demonstrated leadership as a communicator and connector focused on translating his research to make real policy change. He was also selected as one of 40 Hispanic/Latino Ph.D. students for the Yale Ciencia Academy at Yale University which supports the career development of emerging leaders and scientists, and helped found the first chapter of the Society for Advancement of Chicanos/Hispanics and Native Americans in Science in Vermont together with plant and soil science Ph.D. candidate Erika Bueno and fellow graduate students.

Raised in front of a cattle field at his grandmother’s house, Rodríguez-Cruz grew up listening to her stories in agriculture. After earning a B.S. in biology and M.S. in food science in technology from the University of Puerto Rico, Rodríguez-Cruz came to UVM to strengthen his skillsets in both social and agricultural sciences to be able to approach food systems issues from intersectional and transdisciplinary perspectives. After completing his PhD, he plans to follow a non-academic career path, hopefully returning to Puerto Rico, where he can intersect applied food systems research, communication and outreach to create meaningful change.

“I feel embedded to Puerto Rico’s land and seascapes, and through various experiences, I became aware of the challenges we face as an archipelago in the Caribbean to safeguard our food system,” said Rodríguez-Cruz. “Pursuing a career in food systems allows me to stay true to my identities and contribute to my society.”

Recipients of these three awards are determined by the CALS Academic Awards Committee, comprised of faculty throughout the College. Nominations for the 2021 award cycle will open in December 2020.