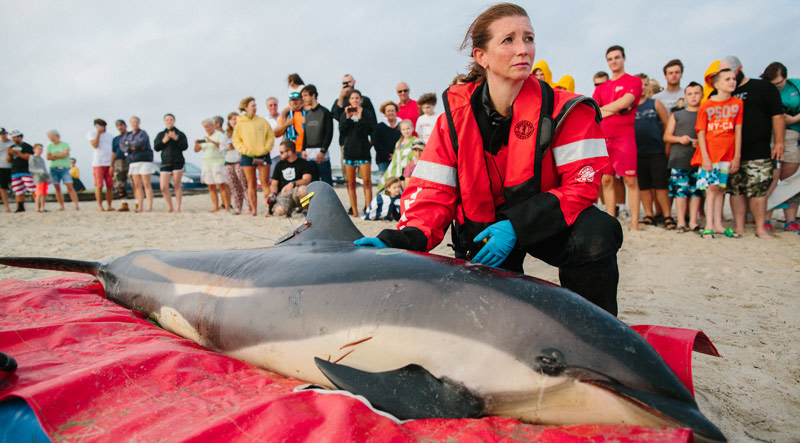 How much does Massachusetts love its coast? Marine conservation now generates more money – in donations and volunteering – than its iconic commercial fishery. Photos: International Fund for Animal Welfare.

Massachusetts boasts one of the most iconic fisheries in the U.S., but new research suggests that protecting marine coastlines has surpassed commercial fishing as an economic driver.

The study is the first to calculate the economic value of coastal preservation in Massachusetts. The researchers find that donations and volunteering to marine organizations contributed $179 million to the state’s economy in 2014, more than the finfish catch ($105 million) and whale-watching ($111 million).

“Marine conservation is a major economic force in Massachusetts,” says lead author Joe Roman, a University of Vermont (UVM) biologist. “This study gives us the tools we needed to show how valuable coastal preservation is to our changing ocean economy.”

After years of diminishing catches of wild fish – including cod, haddock and flounder –commercial finfish has also been surpassed by commercial shellfish operations ($420 million) and recreational fishing ($689 million).

The study, by a team of economists and marine experts from UVM, Boston University and Franklin Pierce University, was published today in the journal Frontiers in Ecology and the Environment.

Of Massachusetts philanthropy in 2014, researchers determined that coastal stewardship groups received more than $122 million in monetary donations, and $57 million worth of volunteer time.

The findings are conservative. The team found that environmental groups with a partial marine mission had a greater value – $282 million in 2014 – but chose to focus on organizations primarily addressing coastal ecosystems. They also excluded university programs, direct spending by government agencies (other than select programs or grants), and money from companies for conservation. 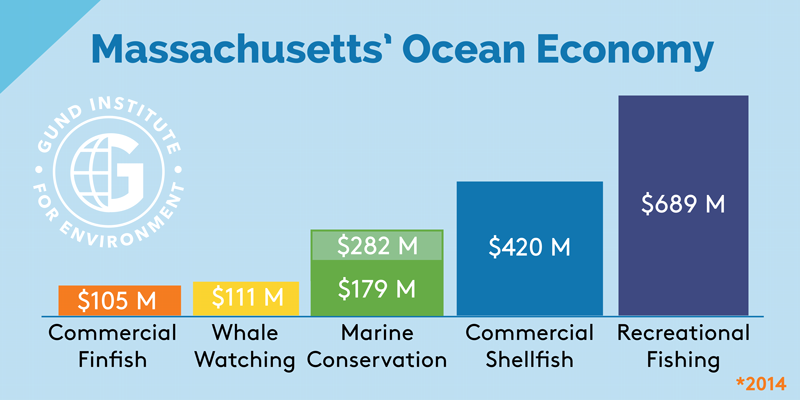 Coastal conservation groups support a range of activities, including responses to marine mammal strandings, cleanup of beaches and waterways, marsh and dune restoration, and education and public-awareness campaigns.

“These organizations provide jobs, and the money they raise is often spent on local goods and services,” says co-author Brendan Fisher of UVM’s Gund Institute for Environment and Rubenstein School of Environment and Natural Resources. “And the results of conservation efforts can benefit many people.”

The importance of coastlines – in Massachusetts and elsewhere – are no secret. Nice beaches and harbors attract tourists. Flourishing sea life contributes to cleaner water and more food options. Plenty of people care about the welfare of marine mammals and the quality of the world’s oceans.

But quantifying how humans value the environment can be challenging. Business sectors can often dominate policy and regulation discussions, as a result, Roman says.

By highlighting the economic might of marine conservation, Roman hopes to show that environmental groups deserve a place at the table when discussing Massachusetts’ ocean economy. “Having better data will help policy makers understand the trade-offs and make better decisions.”

While some researchers have conducted surveys to determine how much someone is “willing to pay” to save a humpback whale, those numbers don't require real dollars and sometimes overstate the actual expenditures for such efforts, Roman notes.

An ‘aha moment’ in Cape Cod

The idea for the study struck Roman on a class trip to Cape Cod to explore the trade-offs of a proposed offshore wind farm. The group met with commercial fishermen, wind developers, conservationists and an oyster farmer.

One morning, his UVM class discovered five dolphins stranded on a beach in Wellfleet, Mass. They watched as the marine stranding experts cared for the mammals’ health and released them back into the ocean.

“People had tears in their eyes when they were releasing the dolphins,” says Roman, who noticed the workers and volunteers who responded to the stranding. He started counting up the investments in time, equipment and money.

“We’re ignoring this whole part of the economy,” he thought. 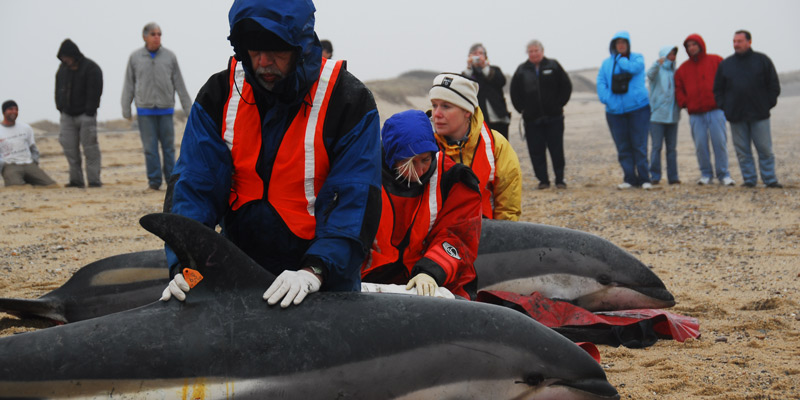 Roman says the valuation could easily apply to other U.S. coastal communities – along the Gulf or Pacific Ocean, for example – with adjustments made for the conservation work that’s most relevant in each location. Efforts to save sea turtles, for example, are significant in North Carolina.

“As we’re making decisions about the future of our oceans,” Roman says, “let’s make sure stewardship has a role.”