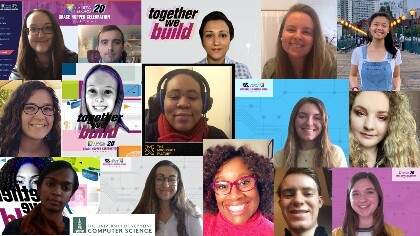 “Together we will build an inclusive tech ecosystem” – Brenda Darden Wilkerson, President and CEO, AnitaB.org.

From September 29-October 3, 2020, twenty nine UVM students and eight UVM faculty and staff members were honored to attend the Virtual Grace Hopper Celebration hosted by AnitaB.org in celebration of the life and work of Grace Hopper and of women and diversity in tech. Rear Admiral Grace Hopper was among the first women to receive a doctorate in mathematics, and went on to join the U.S. Naval Reserve during World War II, where she began her continued work on the Harvard Mark computers. In 1991, she was the first female recipient of the National Medal of Technology. The Grace Hopper Celebration was founded to inspire future generations of women in of STEM fields.

This year, the theme of the celebration was #TOGETHERWEBUILD and featured keynote speakers Serena Williams and Megan Rapinoe. One of the major questions posed to both speakers by Brenda Darden Wilkerson, the president and CEO of AnitaB.org was, “What do you believe is the number one act of activism to bring us all closer to being paid equally?”

“I think in order to have a successful movement or to be a successful advocate you have to start with the most marginalized and the people who experience the most intersectionality…” Rapinoe said. “We need to do a better job - white feminists specifically - need to do a lot better job to make sure all voices are heard.” Williams’ advice was “Be yourself and be humble. Work hard. It doesn’t matter what you’re doing… you have to work hard and there’s no way around it.” Rapinoe also stressed that “When oppressors are asked to share and fight for equity, they think it means they're getting less, when really, we're just asking them to get off our shoulders.”

The UVM Computer Science Department also offered UVM computing students access to an exclusive resume database through their involvement in an AnitaB.org initiative known as Building, Recruiting, and Inclusion for Diversity (BRAID). The database has helped UVM students network with employers this fall to learn more about internships and job opportunities from companies that support BRAID (AnitaB.org/braid/).

Univeresity Communications
“We can impact the world for good by walking in our fullness.” – Brenda Darden Wilkerson