UVM College of Agriculture and Life Sciences Graduates Go Forth 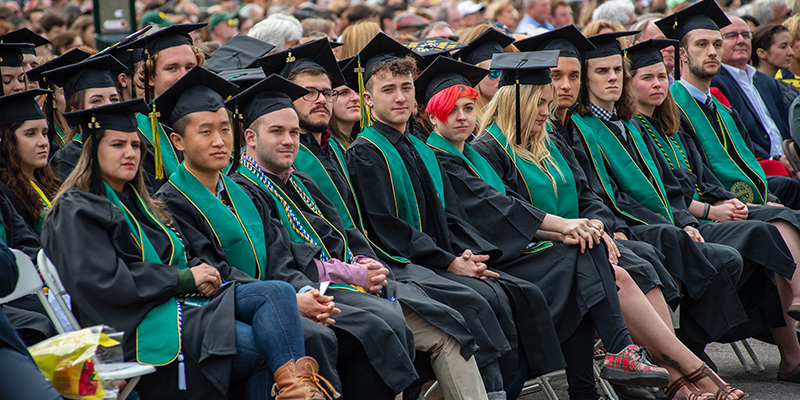 In the final graduation ceremony of UVM’s 218th Commencement weekend, families, friends, faculty and alumni gathered at the UVM Athletic Complex to celebrate the College of Agriculture and Life Sciences’ Class of 2019.

In his last commencement at the helm of the College, Dean Thomas Vogelmann addressed the graduates reflecting on his career and sharing lessons learned since he sat in their seats 45 years ago. Having received his undergraduate degree from UVM in 1974, Vogelmann returned to his alma mater in 2002 as a professor and chair of the Department of Plant Biology and has served as dean of the College of Agriculture and Life Sciences (CALS) for the past 11 years. For Vogelmann, UVM Commencement has marked quintessential bookends to an accomplished career.

“I exit my career in the best possible way I can imagine – sharing this moment with you as you launch your own. We are both graduating,” he said.

Vogelmann spoke directly to the millennial generation – one that is “woke” and seeking to “create a new standard for a more diverse, equitable and inclusive society.” But his message also resonated with parents belonging to the baby boomer era, drawing parallels between two generations sharing a “deep-hearted desire to make the world a better place.” He urged graduates to “think big, but also think small” realizing that there is not one big solution, invention, policy or cure to seek. Instead, he said, make a small difference each day through simple acts of kindness and compassion.

“The true reward in a meaningful career is not all about the paycheck. Rather it is the independence and satisfaction that comes from earning it,” said Vogelmann.

Degrees were presented this weekend to nearly 500 CALS graduates, including 447 bachelor’s, 42 master’s and 9 doctoral degree recipients across the life and social sciences. The graduates join an estimated 12,000 CALS alumni who are “energetic, engaged and changing their communities for the better,” said Vogelmann. The Class of 2019 represents the largest class of CALS graduates to date, a reflection of the College’s growth under Vogelmann’s leadership.

CALS graduates have excelled both in and out of the classroom. The Class of 2019 had the highest number of graduates who received honors as CALS Distinguished Undergraduate Researchers and 33 were members of the UVM Honors College.

Among the highest achieving seniors was Ariela Burk who graduated with a B.S. in Animal Science and minor in English. Burk was awarded the Katherine Anne Kelly Award, a university-wide award given to the graduating senior who best exemplifies its namesake’s ability to bravely battle very serious medical challenges while graduating and engaging in UVM’s student life with energy, passion and a smile. After suffering a broken back from a horse accident during her freshman year that left her debilitated, unable to perform simple skills like putting on socks, she went on to excel at UVM. She completed distinguished undergraduate research with animal science professor John Barlow, was a student in the UVM CREAM (Cooperative for Real Education in Dairy Management) Program, a member of the pre-vet club and explored her love for pottery as a member, instructor and director of the campus pottery cooperative. 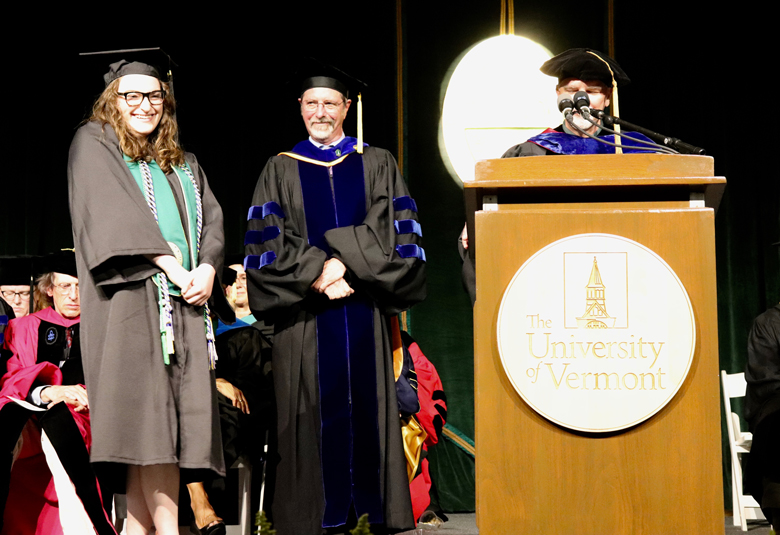 “Ariela’s stellar academic record and extensive extracurricular activities are just a few examples of her determination, grit and work ethic,” said David Townson, professor and chair of the Department of Animal and Veterinary Sciences who presented the award.

Earlier in the day, the university presented honorary degrees to six recipients, including John Bramley, an internationally recognized authority on bovine mastitis, UVM professor emeritus in animal sciences. He served as dean of the College of Agriculture and Life Sciences from 1999 to 2001 and held several academic leadership roles at the university, including chair of the Department of Animal and Veterinary Sciences and UVM provost and interim president.

Vogelmann will step down as dean next month. He will be remembered as “a true university citizen, consensus builder, genuine team player and someone that people know can get the job done,” said David Barrington, professor and chair of the Department of Plant Biology.

View scenes from the CALS commencement ceremony on Facebook and read more about where some of the CALS graduates are headed after graduation on Instagram.