Class of 2019 Turns the Tassels 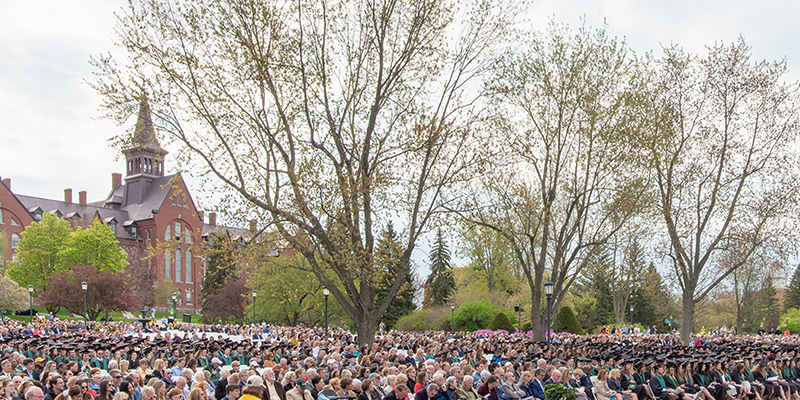 Looking out over a sea of graduates and their families, UVM’s 2019 Commencement speaker Darren Walker noted the many differences among the personal stories of those gathered on the University Green on a breezy Vermont morning. Differences in where they are from and where they are going next with their lives, differences in their academic majors and their career goals.

While differences are something to celebrate, Walker said, "in this new digital world, we are too often led to believe that our differences are reasons for division rather than unity." This focus on division, he added, obscures Americans’ shared values, experiences and aspirations.

Walker has been president of the Ford Foundation for the past six years and is co-founder and chair of the U.S. Impact Investing Alliance. As an international leader of philanthropic organizations, his work has helped revitalize the city of Detroit and aided in the re-building of New Orleans post-Hurricane Katrina, among other initiatives.

Drawing on his own story, Walker noted “many aspects of my identity might be labeled as ‘different’”—Black, gay, born to a single mother in difficult economic circumstances. But with the aid of Head Start, Pell Grants and private scholarships, he thrived academically and built his career.

“You see, in spite of the differences I presented, and the challenges I encountered, I always felt that my country, that America, had my back. I had good people of good will cheering me on and pushing me forward,” Walker said.

As superficial differences are falsely weaponized into division, Walker stressed that “more than what we look like, or where we come from, or how we worship, inequality is what is tearing our communities and country asunder.” Economic, racial and gender inequality, gaps between the experience of rural Americans and urban Americans, Walker said, don’t just cause our national problems, but also prevent us from joining together to solve them.

Walker spoke of the "painful, pernicious impact of hate" our country has experienced from Charlottesville to Pittsburgh: "And while there certainly are racists, anti-Semites, homophobes and prejudice in America today, this is not the character of who we are as a nation. Most Americans believe in ideals of equality and justice for all. And in order for these ideas to be realized we must stand up to emboldened bigotry."

This was the good fight that Walker urged the UVM Class of 2019 to join at this pivotal moment in their lives: “I ask you… I implore you… not to build walls, but to build bridges and to build relationships.” And he asked them directly, “What justice will you serve? What will you make possible for someone else?”

Walker left the graduates with words of hope: “My story is proof of what can happen when people choose to transcend their differences, and build bridges, and build relationships. You, too, are proof. And, on its best days, so is this country I love.”

In his seventh and final commencement as UVM president, Tom Sullivan conferred degrees on an estimated 3,275 graduates, including 2,580 bachelor’s, 452 master’s, 138 doctoral and 105 medical degree recipients. The Class of 2019 includes graduates from 43 states and 36 countries.

In addition to Darren Walker, the university presented honorary degrees to:

Suzanne Preston Blier ’73, the Allen Whitehill Clowes Professor of Fine Arts and Professor of African and African American Studies at Harvard University, a world-renowned investigator and interpreter of precolonial African art and material culture and a pioneer in the digital humanities.

Jackson JW Clemmons, UVM professor emeritus who first joined the faculty in 1962 as an assistant professor of pathology in the College of Medicine. Through the course of his career, Clemmons came to be nationally recognized for his groundbreaking work in perinatal pathology and cytogenetics. As the second African American on the UVM medical school faculty, he advocated for recruitment strategies to attract and retain more students and faculty of color.

Michela Gallagher, who earned her graduate degree from UVM in 1977, leads a diverse team of scientists researching the underlying brain changes that occur with memory loss. The Alzheimer’s Drug Discovery Foundation considers professor Gallagher’s groundbreaking research, which has led to a late stage clinical trial, to be the most promising program in their portfolio of drug development.

Marcelle Leahy, wife of and behind-the-scenes support to the most senior member of the United States Senate, Vermont senator Patrick Leahy. A licensed registered nurse, Marcelle Leahy has contributed her skills to medical organizations in Vermont and Virginia and has been an active member of the UVM College of Nursing and Health Sciences Board of Advisors for nearly twenty years.