Research Beyond the Binary 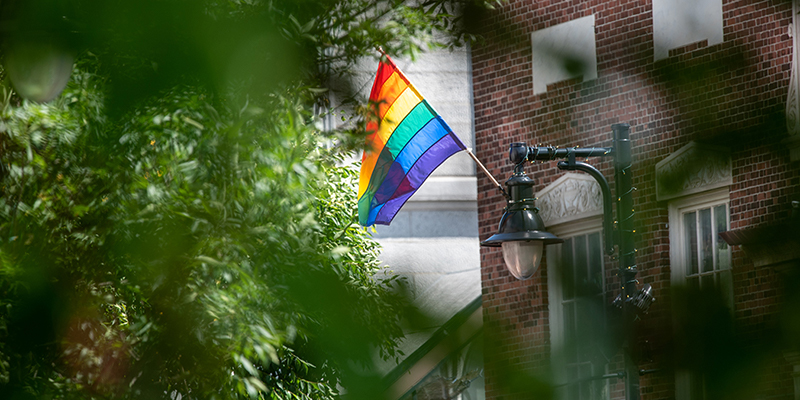 In the pursuit of new knowledge, University of Vermont faculty aren’t afraid to challenge the status quo or stretch the boundaries of their disciplines. In fact, researching against the conventionally accepted grain of the academy is a tie that binds the following handful of UVM faculty in their pursuit of LGBTQ studies. While most of these faculty identify as members of the LGBTQ community themselves, all identify as researchers and scholars working to advance their fields. From health and history to higher education and human experiences, these professors are challenging the norms, presenting new perspectives and knowledge, and breaking down binaries to open a range of new possibilities. 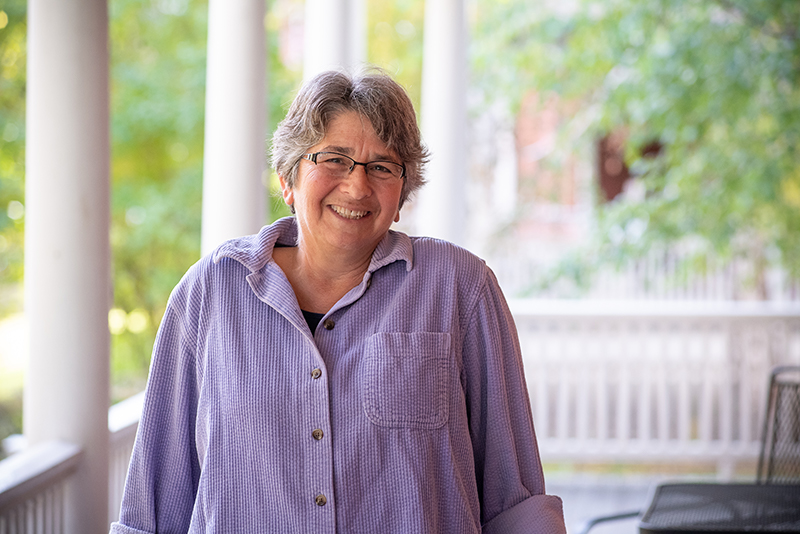 Jacqueline Weinstock often revisits the first day she taught what would become HDFS 167: Sexuality & Gender Studies, the university’s first permanent LGBTQ-focused course. She designed it more than twenty years ago for LGBTQ students who were “yearning for classes that included them. They were yearning to see role models who were willing to be out and caring about, addressing, and studying LGBTQ issues.” She also believed it was imperative that human development and family studies students understand LGBTQ identities and experiences.

A scholar of human development and various marginalized communities, and an active listener above all else, Weinstock had the foresight to relocate the class to a lounge in the Living/Learning Center, “because I wanted us to have a comfortable setting.” In the moments before the class started, she recalls a handful of students she knew to be queer were “walking around, bouncing off the walls while the heterosexual students were all squished together on the couch, a little overwhelmed and a little scared about being in that room.” By the end of class, her students met on common ground, but that visual alone has stayed with her and is why the class was necessary, she says.

Flash forward to today and you’ll find that the course’s content, Weinstock’s knowledge, and her students’ acceptance of LGBTQ issues have advanced dramatically since that day in 1997. But one thing has not: her emphasis on respect and listening as a tool for change, which has been a consistent thread in her decades of research, teaching, and community engagement.

Weinstock has published extensively on lesbian relationships and friendships, gender and sexual identities, and the aging process. Her most recent book "What’s Next? The Continuing Journey of the Wake Robin Life Care Community" (Onion River Press 2019), coauthored with Professor Emerita Lynne Bond, delves deep into gerontology issues through a case study on the local Wake Robin senior-living community. However, Weinstock looks forward to bringing her research full circle by exploring cultural gaps that exist between elders, aging samesex couples, and caregivers in senior-living environments to improve inclusivity for same-sex couples in these settings. 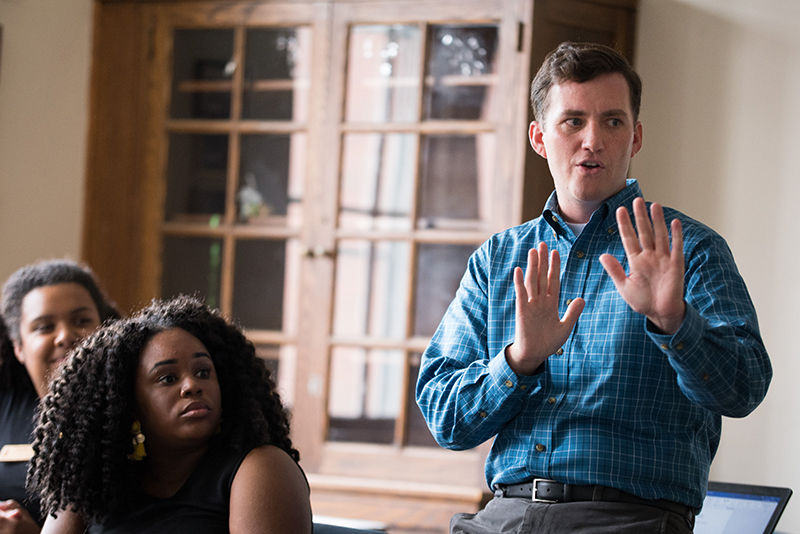 With every data set he analyzes or builds, Jay Garvey considers whether or not the numbers ultimately reflect the people or ideas behind them. As a professor of higher education and student affairs administration and a self-proclaimed “quantitative queer,” Garvey is equal parts data enthusiast, LGBTQ activist, and all-around student affairs and higher education expert. In his effort to improve national education research and campus climates for queer and trans students, it’s difficult to parse out where exactly one role ends and another begins.

As cohesive and intentional as his work is today, Garvey admits that improving the college experience wasn’t always his aim. In fact, it wasn’t until a queer-phobic experience during graduate school that he realized his long-term plan to become a K–12 educator wasn’t the right fit. “I took a quick turn and dove straight into student services at colleges and universities. It was around the same time that I came out as queer,” he says.

Since then, Garvey has worked to fill a void in national education research that widely excludes LGBTQ students, and to eliminate biases and methodologies that contaminate data. He pioneered his own national survey and collected data and climate feedback from 3,500 queer and trans graduates; he’s explored methodological problems with studying queer and trans students; and he’s written studies about how to operationalize sexuality in survey designs and about the general complexities of researching queer identity.

“When you tie college access to the numbers game, it creates a hierarchy of oppression and renders some people as less important. I think this largely affects people with disabilities and trans people who, according to the data, may not be largely representative. But when you start peeling back those layers, you realize the ways in which we collect data are biased. It’s all relative to how you’re collecting the data,” he explains.

In just four short years, however, Garvey says he’s noticed an uptick in LGBTQ student populations at higher education institutions and improvements in national research efforts to collect information about them. “The swift change in the fluidity of sexuality and gender is thrilling. Students are demanding that they no longer be placed in binary boxes of man or woman; or gay, lesbian, or straight, which provides interesting horizons for policies.” 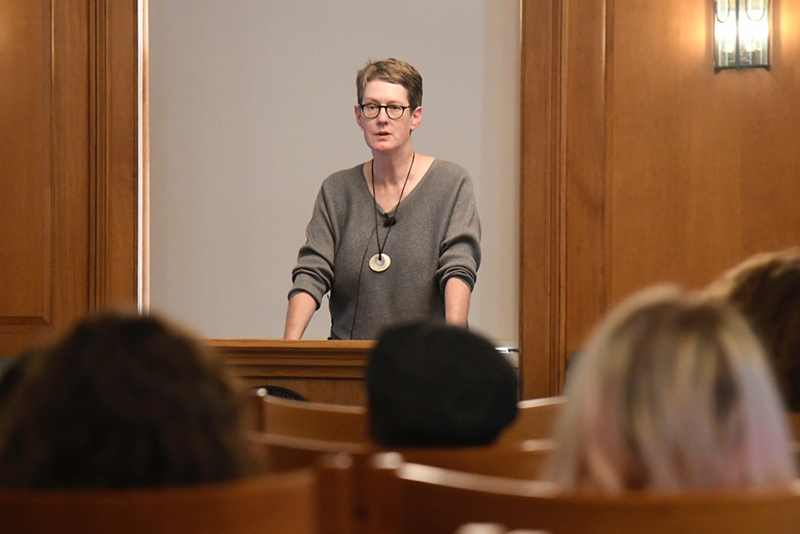 Professor of English and one of four 2019–2020 University Scholar Award recipients, Valerie Rohy jokes that much of the theorizing she does in 19th- and 20th-century American literature can be boiled down to simply this: “I think I gravitate toward a sense of play or possibility, even in the face of very real issues that aren’t fun. That’s sort of my approach in general.”

But at her October 2019 talk for the University Scholar Lecture Series, the humble professor acknowledged that her work and scholarly field are difficult to describe. “Queer theory is an open question that doesn’t settle on one meaning, not even its own,” she said. In many ways, her newest book—which blends philosophy with psychoanalytic, queer, and narrative theories— exemplifies and embraces the ambiguity and open-endedness that LGBTQ studies facilitate.

“Chances Are: Contingency, Queer Theory and American Literature” (Routledge Press 2019) challenges readers to ask what can be understood about our attitudes toward sexuality from literary plot points involving chance, luck, mutation, and accidents. From Edgar Allan Poe’s failed murder mystery “The Mystery of Marie Rogêt” (1842) to Alison Bechdel’s acclaimed lesbian memoir "Are You My Mother?" (2012) Rohy dissects decades of scripted coincidences and accidents, like a character’s fatal abortion in “The Mystery of Marie Rogêt,” to parse out what they articulate about heterosexuality and homosexuality. “I’m looking at abortion as analogous to queerness, as a threat to the reproduction of homo sapiens,” she says of this example.

But “Chances Are” doesn’t dispense many definitive conclusions about the complicated characters and circumstances it explores. And to a certain extent, that abandonment of absolutes and acceptance of open-endedness is precisely what Rohy set out to accomplish as a scholar. “I come out of this school of lit theory that tries to not pin things down, but rather to open up multiple theories,” she says. In fact, the most pointed description she offers about the book is that it’s “making a case for a philosophy of reading that works toward the acceptance of contingency, slippage of meaning, and not knowing. Insisting on knowing is usually the strategy of a tyrant,” she says, half kidding. 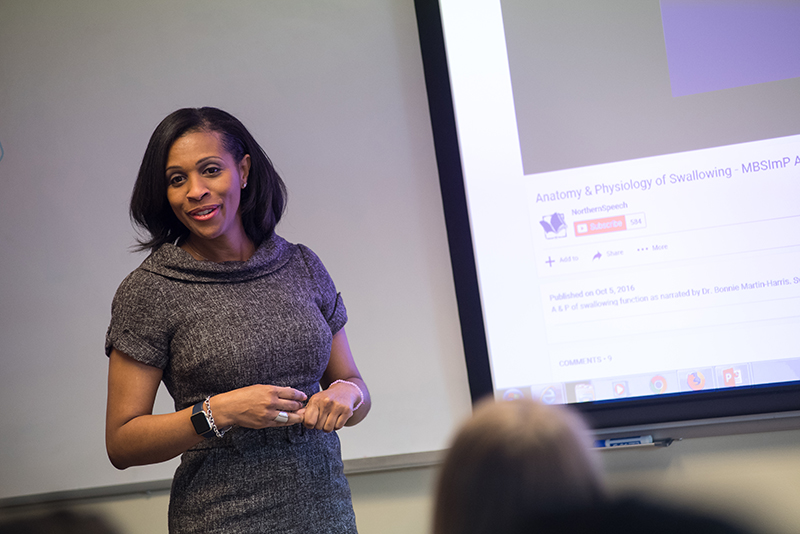 A typical patient Nancy Gauvin might treat as a speech pathologist could have a swallowing disorder, facial difference, or cleft palate that can affect their healthy voice, speech and/or resonance, or ability to swallow safely. But a typical transgender patient that Gauvin treats at UVM’s Eleanor M. Luse Center for Communication: Speech, Language and Hearing already has a healthy voice. The real work is in keeping those patients’ voices and vocal cords that way while she safely transitions their voices to their chosen genders.

“Because vocal cords are so sensitive and delicate, they could develop nodules or polyps, which are growths that develop over abuse and misuse, and that’s what we’re trying to avoid,” explains Gauvin.

She and a team of graduate students at the center design holistic treatment plans that address patients’ unique physical and emotional needs through the long transition process. While each voice is different, treatment generally starts by identifying the patient’s baseline fundamental frequency and where their voice falls along what’s considered the “normal” cisgender male and female ranges. Then, using a piano, Gauvin and her team identify a pitch in the opposite cisgender voice range and begin exercises to attain it.

“It’s not just about the voice, it’s about how their inflection, intonation, prosody, how they use their voice, how they use their words—sometimes even their positioning, how they move and how they sit can affect the message they’re conveying. We look at everything, not just how we sound but how we use our sound,” she says.

In the center, they practice a range of expressions by role playing and acting out various situations like road rage, waking up in the morning, laughing, or answering a phone call. Because it can be a highly emotional experience, Gauvin incorporates gratitude sessions and family support therapy as part of the holistic treatment they receive.

“This is a brave thing that these patients are doing, and it’s also hard. They’re switching their lives in real-time from one perspective to another so that other people can make observations about them,” Gauvin says. “Everyone wants to feel like themselves, and if this is what’s going to help our clients feel like their true selves, then it matters. If even just one person feels good about who they are, then it matters.”

THE HISTORIAN: Paul Deslandes
Chair and Associate Professor of History 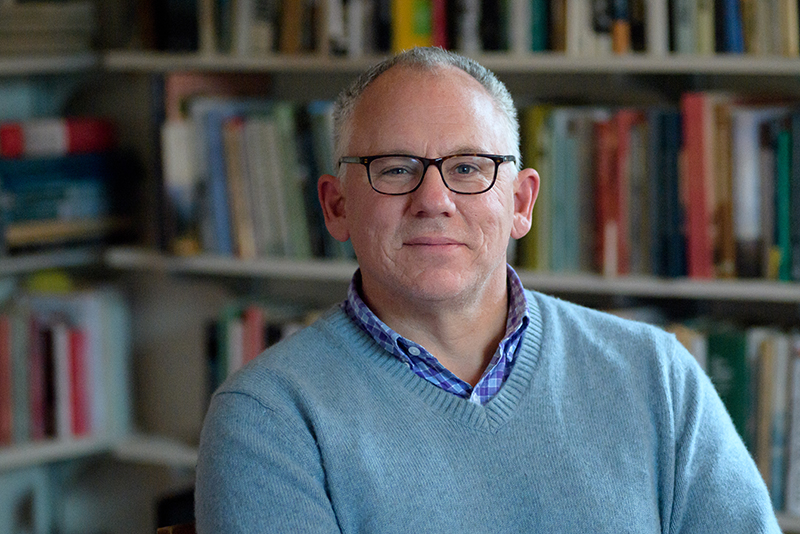 Beauty is pain. Beauty is in the eye of the beholder. Beauty is…the cornerstone of our modern economy? According to British historian Paul Deslandes’s latest research, not only is beauty a critical component of how we engage with consumer capitalism, but it’s also a currency in our competitive social marketplaces.

“Appearance is something that everyone is considering on a daily basis, minute by minute. It’s evident in the ways we interact with each other and it’s how we assess worth and value. It seems superficial, but it’s a human reality. To understand how that operates is important,” Deslandes says.

His forthcoming book, tentatively titled "The Culture of Male Beauty in Britain from the First Photograph to David Beckham" (University of Chicago Press 2020), explores more than a century of modern British history through archival documents detailing shifts in male beauty, sexuality, and appearance over time. Poring over research materials like nineteenth-century hairdressing catalogs, art, World War II-era advertisements, personal letters, and even pornography, Deslandes came to understand that “so much of how we see the world is dependent on the perception of appearance.”

He notes, for example, that the visible deterioration of male bodies during the AIDS epidemic signaled the severity of each individual’s condition, as well as the crisis as a whole; that preferences for clean-shaven faces, as portrayed in advertisements for safety razors during WWII, reveal much about gender relations and aesthetic standards; and that dreadlocks, afros, and other hairstyles were worn by people of color in Britain, as they were in the United States, to disrupt white standards of beauty.

Having written extensively about male bodies and British same-sex desiring men in the past, Deslandes approached this project to “reflect on the intersection of the queer and straight. I realized the two are constantly influencing each other,” he says. “From my perspective as a historian, part of what I’m doing is trying to say we shouldn’t necessarily think about LGBTQ people as only on the margins, but actually as informing the mainstream.”