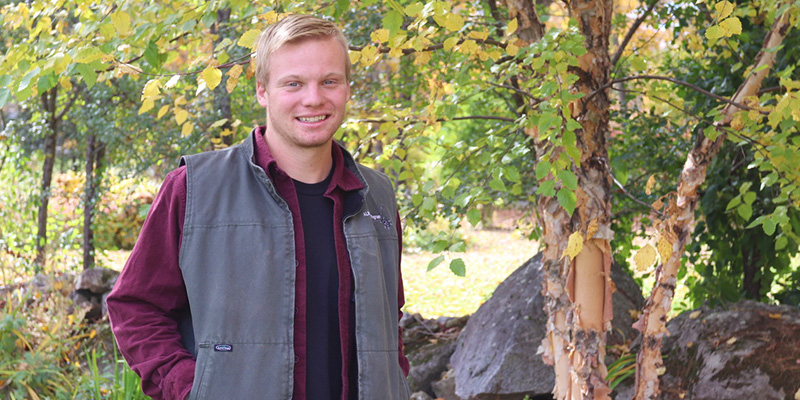 Senior Ben Church became a leader in the Rubenstein School Forestry Program as co-president of the student chapter of the Society of American Foresters (SAF) and a district rep for student SAF chapters in the northeastern United States.

Rubenstein School senior Ben Church ’20, a Forestry major with a minor in Parks, Recreation and Tourism, learned how to manage forests, how to reconstruct hiking trails, and how to lead. He took on leadership roles in the Society of American Foresters, with the Appalachian Mountain Club, and in recreation opportunities on the UVM campus.

Ben followed closely in his father’s footsteps. Peter Church ’87 graduated from the UVM School of Natural Resources with a degree in Recreation Management and is now Director of Forest Stewardship for the State of Massachusetts.

Growing up in Littleton, Massachusetts, Ben hiked trails in his home state and in the White Mountains of New Hampshire. His passion for hiking and love for the Whites, led him to volunteer on a trail crew with the Appalachian Mountain Club (AMC) during high school.

“When it came time to apply to college, I knew I wanted to be out in the woods with my classmates and professors,” said Ben, who chose to enroll in the Forestry Program in the Rubenstein School of Environment and Natural Resources. UVM also offered Ben opportunities he was looking for in club sports, an active Outing Club, and, of course, proximity to mountains and hiking trails.

He took advantage of a backpacking trip with TREK, a program run by the UVM Outing Club and joined other incoming undergraduates while exploring the Green Mountains of Vermont before the fall semester began. His experience enticed him to become an Outing Club and TREK leader. And as a certified lifeguard since high school, Ben worked for UVM Campus Recreation at the University’s pool. He soon advanced to facility supervisor and head lifeguard.

As a first-year Forestry student, Ben joined the UVM Forestry Club — the student chapter of the Society of American Foresters (SAF), the national accrediting organization for college forestry programs. He connected with older forestry students in the club and their faculty co-advisors as they prepared for the student quiz bowl in competition with other college teams at regional and national meetings.

“I gained valuable experience early on before I even started any of my forestry classes,” said Ben who became co-president of the SAF chapter his junior year when he also got his chance to compete in the quiz bowl at the national SAF meeting in Portland, Oregon. “It was exciting to make the final four in the quiz bowl and to meet Gail Kimbell, a Rubenstein School alum who served as Chief of the Forest Service.”

This year, as a senior, Ben’s longtime participation and leadership in SAF led to his selection as a District 6 student representative for chapters in the Northeast. He represented colleges in six northeastern states and met with other district representatives from across the United States at the October 2019 national SAF convention in Kentucky. In this regional role, Ben served as a liaison between students and forestry professionals and helped to make students aware of the opportunities and career networking that SAF provides. For his leadership and achievements, Ben received the SAF Green Mountain Division James E. Wilkinson Jr. Student Award.

Inspired by Professor Tony D’Amato, who co-advises the UVM Forestry Club, Ben found his passion in silviculture and opportunities in the forestry profession. He became the teaching assistant in Tony’s silviculture course.

“I loved being out in the woods of Vermont and upstate New York in the fall as a student in Tony’s class and I was excited to do it all again as a TA,” said Ben, who received a Northeast Regional Scholarship from Xi Sigma Pi, a national forestry honor society.

Ben maintained his connections with the AMC professional trail crew and worked his college summers in the White Mountains. He advanced to leading a three to five-person crew last summer. He has done heavy trail reconstruction and tree removal on 365 miles of AMC trails and is trained in the use of a technical rigging system with high lines and a tripod to position large rocks for trail and bridge construction.

“Trail crew members are traditionally educated by more experienced members of the crew,” said Ben. “This passing down of our training is an informal method of education unique to trail crews in the Northeast.”

Last summer, Ben and his AMC cohorts celebrated the 100th anniversary of the AMC White Mountain trail crew and shared traditions and stories with trail crew alumni from as far back as the 1950s. This summer after graduation, he will progress to trail master, manage three crews, and assist with hiring.

After this summer, he plans to dive into forestry, possibly consulting, through his connections with associates on the AMC trail crews or his professional forestry contacts in SAF.