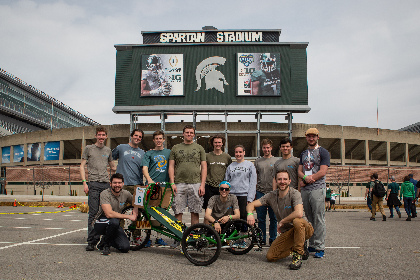 Recumbent bikes put riders in a laid back position, but the scene last month at the American Society of Mechanical Engineers (ASME) Human Powered Vehicle Challenge (HPVC) was anything but laid back. Instead, 50 teams from the U.S., Puerto Rico and Egypt scrambled to assemble, present, and test human powered transportation—often the only form of transportation in underdeveloped or inaccessible parts of the world.

UVM was one of those teams, finding enough success to place 7th in the endurance event, 9th in the drag race, 21st in the women’s drag race, and 19th overall. “It was a great surprise to place in the top 10 in some of the events, competing against teams from around the world,” says UVM ASME Chapter President Brandon Voll ’19, “To be able to do that only our second year in was amazing.”

New this year was the Endurance Event challenge to pull a 100-pound trailer; UVM was one of only a handful of schools that managed to complete the challenge without breaking down or drastically falling behind. The team had spent an estimated 500 hours leading up to the HPVC designing a recumbent bike—actually a tricycle, because it has three wheels—and was surprised to see that one school built a traditional bicycle. Since the rules require that the vehicle must be able to withstand a rollover, it did not seem like the most strategic choice, says Burton, who oversaw the project this year.

In order to bring more students to the competition, the team also did fundraising, securing sponsorships from such Vermont businesses as VTRANS, BioTek, and 89 North, along with donations from club participants’ parents. “All that combined helped out a lot,” says Voll, adding that the biggest reward was working together and completing what the team set out to accomplish.

“We’re the only ones in Vermont doing this,” says Burton. “It was really rewarding for the newcomers—pulling into a parking lot to see 50 other teams with crazy-looking vehicles like ours.”

The results are nice, says Novotny, especially compared to some teams that arrive with a trailer full of tools. “Everybody’s learning,” he says, “where we want to be two to three years from now.” 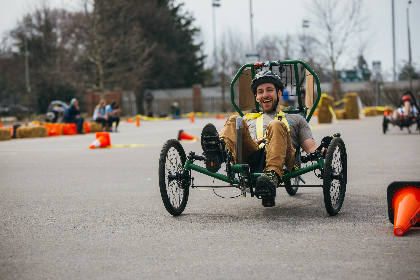