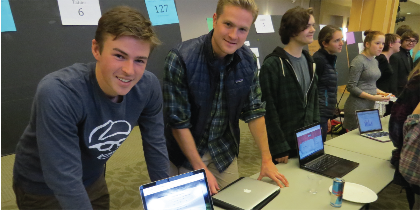 Anthony F. Voellm ’93 and Beth Zimmerman ‘93 have announced a generous $50,000 gift to be made over five years to benefit UVM’s Computer Science Department and to provide funding for the CS Fair. Voellm is a software development manager at Microsoft Corporation in Redmond, Washington.  Microsoft Corporation will match Tony and Beth’s philanthropy resulting in a $100,000 permanent endowment at UVM. While this fund is growing, the couple will contribute $1,500 each year for the next five years to provide current funding to the CS Fair. The total gift will be $107,500. The fund is named the Zimmermann-Voellm Computer Science Fund.

“This incredibly generous gift will make a major positive difference for UVM Computer Science in the coming years,” says Christian Skalka, Professor and Chair, Department of Computer Science. “This financial support will help us grow and best serve our students and community in light of constantly increasing interest and enrollments in Computer Science.”

What’s the reason for the new fund? “One thing I always loved about Vermont was the entrepreneurial spirit,” says Voellm, who wrote a “Junior Year Abroad” game engine before attending UVM. “I always wished we had the opportunities that are there now.”  To fulfill their own entrepreneurial spirit, Voellm and Zimmerman sold futons direct from manufacturers to fellow students in the early 90s. Now, he points out, the CS Fair connects like-minded students to more ambitious projects such as tech startups.

After graduating with a BS in computer science, a BS in physics and a BA in math, Voellm worked at the Naval Research Laboratory and the Pacific-Sierra Research Corporation, among other companies, before joining Microsoft in 2001, and returning to work there again in May 2016 from Google. (Zimmerman is a professional test administrator and proctors standardized tests all over the U.S. When not proctoring tests she substitutes in the Lake Washington school district and occasionally works at the circus.)

Skalka adds that in particular, the promise of sustained support for CS Fair is extremely important. “The CS Fair brings together UVM students with local and regional businesses, forming a centerpiece of engagement with the broader community and providing numerous professional opportunities for our students, as well as being a lot of fun,” he says. “We are deeply appreciative of the Zimmermann-Voellm Computer Science Fund.”