Dr. Kono was the first person ever to receive a Doctor of Musical Arts Degree in Tuba performance from The University of Texas at Austin, where he also studied piano, composition, and conducting. He was the Assistant Conductor of the Kingsville Symphony Orchestra (TX) where he conducted the season opening concerts from 2007-2011. Dr. Kono previously taught at Texas A&M University-Kingsville, The University of Texas at San Antonio, and the University of Mary Hardin-Baylor in Belton, Texas. He has studied conducting with Jerry Junkin, Mark Kelly, Eugene Dowdy, Peter Bay, and Silas Huff. Dr. Kono was selected to attend the Summer Conductors Institute at the Eastman School of Music, where he studied with Maestro Neil Varon and conducted the Rochester Philharmonic. He studied composition with Alex Lubet, Stephan Paulus, and Grantham.

Internationally recognized as a pedagogue on low brass and a strong advocate of music education, Dr. Kono has taught hundreds of students, and provided over 40 clinics. His students have competed regionally, nationally, and internationally, and have shown impressive results.

Recent conducting highlights: the world premiere performance of "Flight" by Marcus Karl Maroney; the TAMUK Faculty Chamber Ensemble on William Walton's Façade and a performance of Vermont Counterpoint with UVM Flute Ensemble at the presence of the composer, Steve Reich; guest conductor clinician for the Regional Orchestras in South Texas and Vermont; the Burlington Chamber Orchestra and Burlington Choral Society's 2015 performance of Handel's "Messiah"

Dr. Kono in the news:

He was placed as a finalist for The American Prize for orchestral conducting at the college/university level, and earned Bronze Medal of the Global Music award for his composition "Mamma at the Gate" in summer 2014. 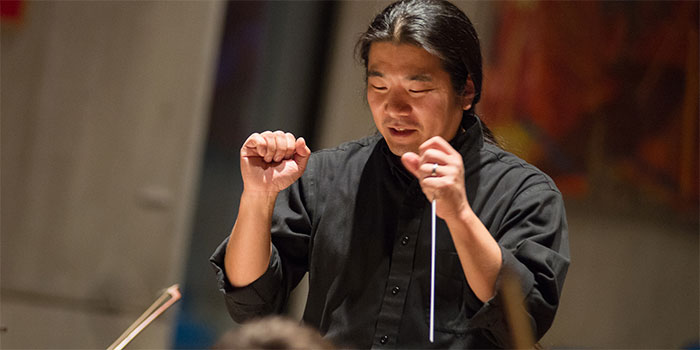