New research from the University of Vermont predicts which plant species are more likely to become invasive based on biological traits. 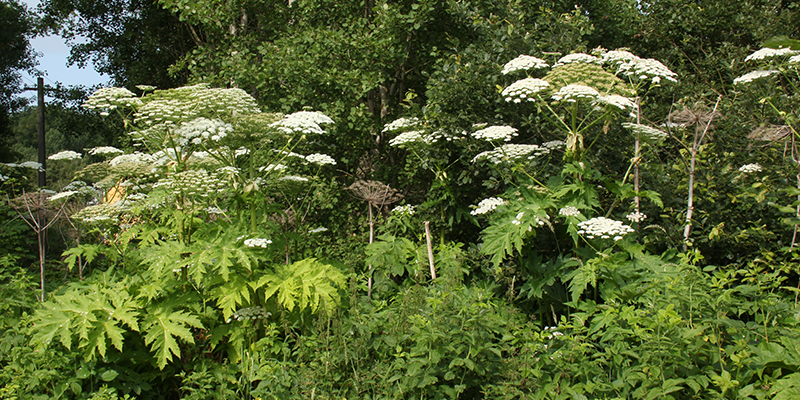 While native to the Caucasus Mountains and Southwest Asia, giant hogweed (Heracleum mantegazzianum) is an invasive plant in many parts of North America. New research from UVM finds a single biological trait - plant height - may help predict which plant species are likely to become invasive in a given environment. (Photo: Milan Chytry)

Around the world, over 13,000 plant species have embedded themselves in new environments – some of them integrating harmoniously with the native plants, while others spread aggressively disrupting the ecosystem. Understanding why some plants become invasive, while others do not is critical to preserving the world’s biodiversity.

“Invasive species can have a devastating effect on our natural ecosystems and cause long-term environmental and economic problems,” said Jane Molofsky, a professor in UVM's Department of Plant Biology and senior author of the study published November 6, 2018 in Nature Communications. “Our aim was to leverage big data and statistical techniques to evaluate this problem in a novel way by comparing traits of native and non-native plants across a range of plant communities.”

Working with a team of international collaborators, Molofsky and colleagues at UVM explored differences in biological traits of 1,855 native and non-native plant species across six different habitat types in temperate Central Europe.

In each habitat type, the authors compared the traits of native and non-native plants. Of the non-native plants, they looked at differences in those that “naturalized,” meaning they reproduce in nature without direct intervention by humans but did not aggressively spread, and invasive species, those that spread over long distances and often cause serious ecosystem damage.

In almost all of the studied habitats, the findings showed non-invasive plants shared similar traits with the native plant community, such as plant height, leaf characteristics and average seed weight. In contrast, invasive species appeared to have similar but slightly different biological characteristics – they were similar enough to be present in the same habitats but just different enough to have unique characteristics that allowed them to flourish.

The findings support a novel theory of invasion called the edge of trait space model that suggests non-native plants can co-exist with a native plant community when they share a set of specific biological traits but can invade when they have slightly different adaptations to local environmental conditions. Therefore, newly introduced species must be similar enough to thrive in a community of native species, but their differences may enhance their invasion success.

The results indicate that a single, easily measurable trait – plant height – can be a highly predictive factor in determining which plants may become invasive in a given environment. While the predictive traits may differ among different flora, the research suggests eradication efforts should focus on non-native plant species that differ from their native communities.

“We need new predictive tools to help inform policy and management decisions around conservation and biodiversity,” said co-author Brian Beckage, a professor in the Department of Plant Biology and Department of Computer Science, and affiliate of the UVM Gund Institute for the Environment. “Our hope is that this model can be used as a screening tool to determine which plants have the highest probability of becoming invasive in the future.”

The research was conducted as part of a collaboration with James Marsh Professor David M. Richardson, Director of the Centre of Excellence for Invasion Biology at the Stellenbosch University, and funded by the UVM James Marsh Professors-at-Large Program, which brings outstanding individuals of international distinction to UVM.

Other co-authors of the study include UVM’s Nicholas Gotelli, professor in the Department of Biology and fellow in the Gund Institute for the Environment, well as researchers from Masaryk University and the Czech Academy of Sciences in the Czech Republic.