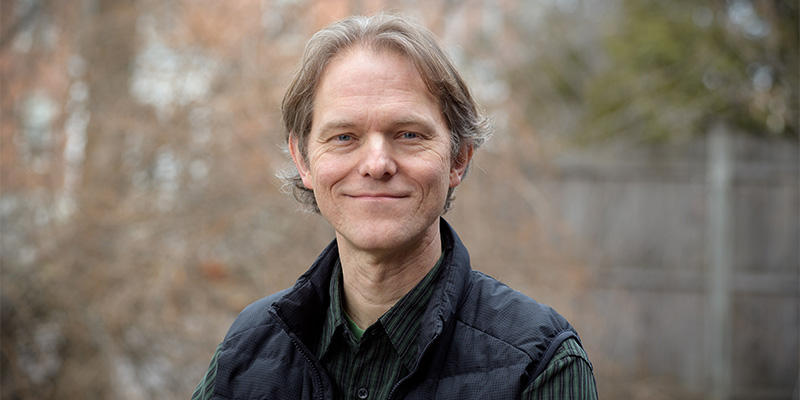 Professor Adrian Ivakhiv, of the Rubenstein School of Environment and Natural Resources and the UVM Environmental Program, has been selected as a 2019-2020 University Scholar.

The University Scholars program recognizes distinguished UVM faculty members for sustained excellence in research, creative, and scholarly activities. Scholars are selected by a faculty panel based upon nominations submitted by UVM colleagues.

Dr. Ivakhiv is a preeminent scholar working at the interface of humanities and the environment and is recognized internationally as a leader in this field. He received his B.F.A, M.E.S, and Ph.D. from York University. He joined UVM in 2003, and is now a Professor of Environmental Studies, focusing on Environmental Thought and Culture, in the Rubenstein School. He currently holds the distinguished Steven Rubenstein Professor of Environment and Natural Resources.

He is also a Faculty Fellow in the Gund Institute for Environment and recipient of a Gund Catalyst Award in 2018. His research and teaching are focused at the intersections of ecology, culture, identity, religion, media, and the creative arts.

He is the author of Claiming Sacred Ground: Pilgrims and Politics at Glastonbury and Sedona (2001), Ecologies of the Moving Image: Cinema, Affect, Nature (2013), and Shadowing the Anthropocene: Eco-Realism for Turbulent Times (2018). He served as executive editor of The Encyclopedia of Religion and Nature (2005) and is founding editor of Media+Environment journal, former President of the Environmental Studies Association of Canada, and on the editorial boards of several journals and book series in the environmental humanities.

Dr. Ivakhiv has played a key role in bridging environment, arts, and humanities at UVM by organizing several groups of interdisciplinary environmental scholars including the Lattie Coor Environmental Humanities Fellows, the EcoCultureLab, and the symposium-festival “Feverish World, 2018-2068: Arts and Sciences of Collective Survival.” He is a renowned teacher who has mentored more than 75 undergraduate and graduate student theses in the arts, humanities, and social sciences.

“We are honored to have Dr. Ivakhiv recognized for his scholarly accomplishments and creative works, integrating environmental humanities, arts, and sciences," said Rubenstein School Dean Nancy Mathews. "His selection as University Scholar is one of the highest honors at the University of Vermont and recognizes significant achievement in one’s discipline. That Dr. Ivakhiv is a true interdisciplinary scholar speaks volumes about the impact he has made locally, nationally, and internationally. He has raised awareness of the complementarity of art and the environment and the importance of the humanities in telling the environmental story."