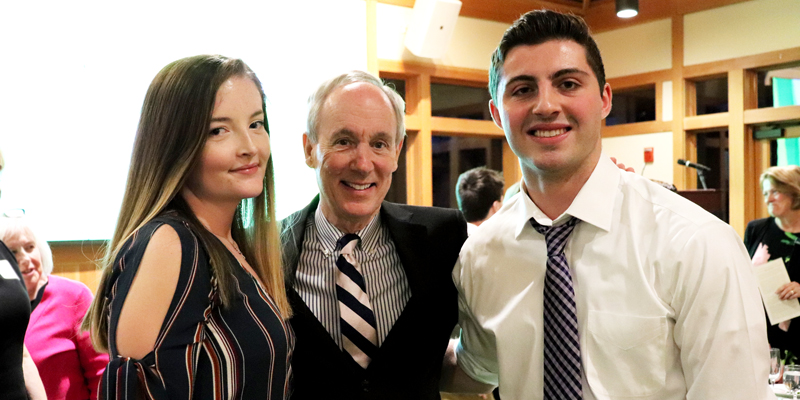 UVM’s College of Agriculture and Life Sciences (CALS) has awarded its college-wide academic awards – the Lawrence K. Forcier Outstanding Senior Award and Alexander Kende Academic Merit Award – to two students who have demonstrated excellence both in and outside of the classroom.

Named in honor of former CALS dean Lawrence K. Forcier, the Outstanding Senior Award recognizes the accomplishments of a senior who has excelled academically and exhibited exemplary character traits and leadership abilities as a member of, and in service to, the UVM community.

Valedictorian of Winooski High School’s class of 2015, biochemistry senior Amanda Nattress came to UVM with more than a semester’s worth of college credits and her eyes on medical school. Growing up in neighboring Winooski, VT, a partner city of the federal refugee resettlement program, provided Amanda with a unique appreciation of other cultures – 26 languages were spoken in her graduating class of 29 students. Learning about the adversity of the refugee experience and health disparities within her own community cemented her desire to become a physician.

Throughout her time at UVM, she has maintained an excellent academic record while juggling multiple jobs and making time to volunteer in the community with the American Red Cross, All Breed Rescue and tutoring students in Winooski. Between career counseling in UVM’s Career Center, conducting undergraduate research, working as a Licensed Nursing Assistant by day and in the UVM Medical Center Emergency Department by night, and as a pharmacy assistant on weekends, Nattress has gained invaluable experience to prepare her for a future in medicine.

“Amanda is one of the very best students I’ve had the pleasure to advise and mentor and I look forward to seeing what she will accomplish in the next few years,” said Sylvie Doublié, professor in the Department of Microbiology and Molecular Genetics. “Her sharp intellect, ambition, and kindness combined with her passion for social justice will make her a compassionate physician and a formidable advocate for those who are less fortunate.”

Alex Kende graduated in May 2000 from the Biological Science Program at the top of his class. An exemplary student, Kende received the Lawrence K. Forcier Outstanding Senior Award and had been accepted into UVM’s College of Medicine Class of 2004 before a serious illness claimed his life. Named in his memory, the Alexander Kende Academic Merit Award is a scholarship presented annually to a CALS junior with an interest in medicine or biomedical research who has demonstrated exemplary character traits, leadership and service to UVM and the local community.

This year's recipient James Whitley was admitted to UVM in 2016 as a Green and Gold scholar and member of the Honors College after graduating from Middlebury Union High School. Whitley came to UVM with an interest in pursuing medicine and elected to major in biological science with minors in chemistry and statistics. He applied and was admitted to UVM’s highly competitive Premedical Enhancement Program, through which he has shadowed several doctors and observed seriously ill young children.

“James holistically recognized the medical struggles of these young children,” said Martha Lance, academic advisor for the Honors College. “While fascinated by the scientific quandaries of illness, James also identifies with the humanness of those under his observation and care. It is this rare merger of scientist and humanist that distinguishes James.”

Whitley is currently conducting research under Jana Kraft, associate professor in the Department of Animal and Veterinary Sciences, studying lipid metabolism as a model system to understand some aspects of diabetes. He has held leadership roles in various organizations on campus, including Rallython, UVM’s annual 12-hour dance marathon to raise money for the UVM Children’s Hospital. He has also served as a peer mentor with the Honors College and has spent over 100 hours mentoring first-year biology and chemistry students over the past three years.

“James exemplifies everything that one would want to see in a Kende award recipient,” said Don Stratton, co-director of the Biological Science Program.

Recipients of the Lawrence K. Forcier Outstanding Senior Award and Alexander Kende Memorial Award are determined by the CALS Academic Awards Committee, comprised of faculty throughout the College. Nominations for the 2020 award cycle will open in December 2019.