How Soul Fire Farm is dismantling racism in farming. 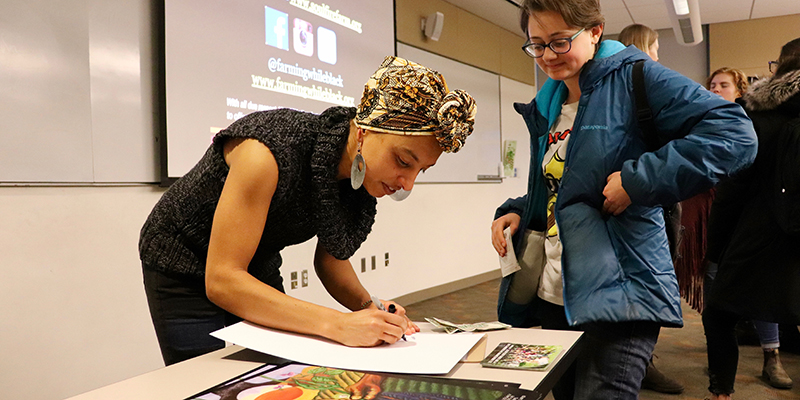 Leah Penniman spoke with UVM students, faculty and staff about her new book, Farming While Black, and what her organization is doing to dismantle racism in farming.

For farmer, author and activist Leah Penniman, farming is not just about feeding the community, though it is what got her started. For Penniman, farming is about uprooting what she describes as systemic racism in the modern U.S. food system and training the next generation of activist farmers.

Speaking to a standing-room only crowd at UVM last week, Penniman described the policies and practices that have led to more racial stratification in land ownership than ever before in the country’s history and what her organization, Soul Fire Farm, is doing to end food injustice.

“There was so much hope in Leah’s message, as well as the blueprint for how we remake society,” said Tatiana Abatemarco, a lecturer in the Environmental Program at UVM, who helped organize the talk in partnership with UVM's Department of Plant and Soil Science and Mosaic Center for Students of Color. “The large turnout speaks to what Leah represents – a combination of social and activist work, utilizing the food system to create systemic change, and the value of transdisciplinary thought and action.”

Growing up as a mixed-race black child in a predominantly white community, Penniman struggled with her identity. She was drawn to the forests and natural beauty of the rural Northeast, but felt alone in the deep connection she felt with the earth. When she discovered her love for sustainable agriculture, a largely white-dominated industry, she worried she was betraying her ancestors who had worked hard to be free from the land.

“There’s a lot of trauma in our history related to the land. We started to imagine the land was also the source of oppression, when in fact it was the land that was sustaining us,” said Penniman.

As she began to connect with other farmers of color, she learned that many of the organic farming practices she was learning – raised beds, cover cropping, permaculture, polyculture – had roots in African indigenous cultures. In her new book, Farming While Black, Penniman celebrates her ancestors’ distinct, technical contributions to sustainable agriculture and aims to make that path accessible to more people of color.

Racial Stratification of the Land

In 1920, 14 percent of U.S. farmland was owned by black farmers. Today, that number has dropped to around 1 percent – a loss of over 14 million acres of land caused by racial terror and discrimination, said Penniman.

As black farmers moved North to escape the harsh segregationist laws and violence of the South, a new population of farmers came to fill their place. The Bracero Program, a series of bilateral agreements between Mexico and the U.S., allowed millions of Mexican men to come to the U.S. to work on short-term, primarily agricultural labor contracts between 1942 and 1964. Over 75 percent of farmworkers in the U.S. today were born outside the country and speak Spanish as their first language, according to the latest National Agricultural Workers survey from the U.S. Department of Labor.

“The food system is working exactly how it was designed – to concentrate resources in the hands of a few,” said Penniman. “Even as our consciousness elevates and we become more understanding of each other, the structural racism deepens because those resources are not being distributed. It creates a totally stratified power structure in the food system.”

Discriminatory housing policies during the New Deal Era of the 1930s created a new system of land dispossession and has resulted in “food apartheid,” a term Penniman uses to describe communities’ inability to access fresh, healthy foods depending on their zip code. This lack of access leads to higher rates of diet-related illnesses like diabetes, obesity, heart disease and cancer, all of which disproportionately impact black and indigenous communities, said Penniman.

“We can’t let the bigness of problems ahead of us cause us paralysis, because then we’re just being complicit. There’s no such thing as passive anti-racism,” said Penniman.

Penniman founded Soul Fire Farm as a way to feed her food apartheid neighborhood in the South End of Albany, NY. Every Wednesday during the growing season, her team packs up 100 boxes of fresh produce and brings it to the doorsteps of those who need it most in the community – newly arrived refugees, immigrants and people with incarcerated loved ones. Some neighbors pay more for their Community Supported Agriculture (CSA) box so that others can get theirs for free.

All of the food grown at Soul Fire is cultivated in a way to make the earth better using regenerative farming methods and requires treating the earth with respect, said Penniman.

“It’s not just the physical technologies, but also the spiritual technologies. We invite the life back into the soil, we give thanks and we celebrate our ancestry,” said Penniman.

The 80-acre farm provides fertile ground to train the next generation of farmer activists and strengthen the food justice movement through policy and advocacy work. The farm provides educational and immersive training programs designed for black, indigenous and people of color and has produced over 600 alumni, most of whom are farming.

Reflecting on Penniman’s talk, sophomore environmental studies major Erin Joseph said, “I realized how little knowledge I had about our farming history and diversity within the industry. We are all involved in our food system as consumers or producers – or both – and we have the ability to influence each part of that system.”