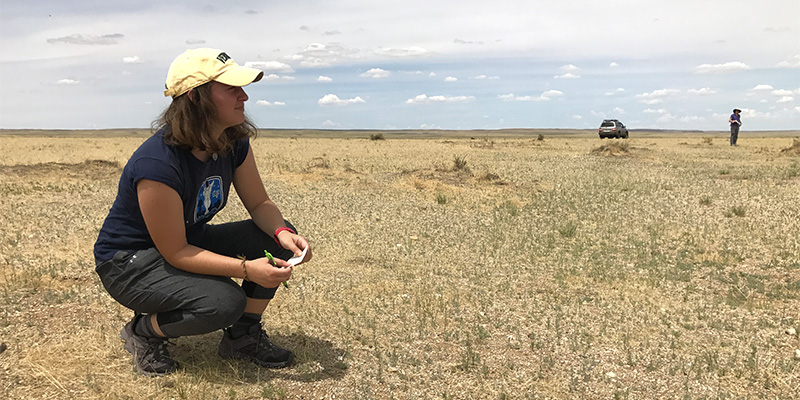 Rubenstein School undergraduate Reilly Becchina set her sights on conducting research in the Wildlife and Fisheries Biology Program. Her continuing studies of declining marmot populations in the steppe region of Mongolia will contribute to wildlife conservation efforts.

Reilly Becchina ’20, a senior Wildlife and Fisheries Biology major in the University of Vermont (UVM) Rubenstein School of Environment and Natural Resources, recently became a Fulbright Research Grant Selectee for her work in Mongolia studying marmots, and she plans to continue researching human-wildlife interactions.

Originally from Setauket, New York, Reilly knew she was interested in an environmental field when exploring colleges.

In the School, she decided to focus on wildlife conservation and concentrated in Wildlife Biology, with a minor in Forestry.

Following her sophomore year, Reilly worked with the Vermont Fish and Wildlife Department as a Rubenstein School Perennial Summer Intern. She spent the summer at sites across Vermont while monitoring bat populations and learning about their conservation from state biologists.

“I loved being a part of that, but I wasn’t sure if I wanted to work as a state biologist because I was interested in being able to ask my own questions and that got me thinking about research,” said Reilly.

In her junior year, Reilly took the opportunity to study in Tanzania with the School for Field Studies in a wildlife management program.

“Studying abroad in Tanzania really shaped my college experience, sparked my interest in human-wildlife interactions, and put me on the trajectory to pursue research,” said Reilly. “It really opened my eyes to how complex conservation problems are and how you need to have an interdisciplinary approach to solving those problems.”

This past year, Reilly worked with her major advisor Associate Professor Jed Murdoch and graduate student Lisi Lohre on a sustainable cashmere project in Mongolia. The project, funded by a UVM Gund Institute for Environment Catalyst Award in collaboration with Rubenstein School Professor Jon Erickson and Associate Professor Pablo Bose of the UVM Geography Department, focused on impacts of goat herding and grazing on the steppe ecosystem and on certain wildlife species as indicators for overall landscape health.

Reilly’s UVM Honor College thesis research narrowed in on one of those species, Siberian marmots, which are a keystone species in the steppe ecosystem. Marmot populations have declined in recent years, and the species is currently highly endangered in Mongolia.

“Historically marmots have been very common and widespread, but they are considered a delicacy in Mongolian culture, and they have been overharvested in addition to being negatively impacted by grazing related to cashmere production,” said Reilly.

Through her senior research, it became clear to Reilly that a more comprehensive conservation plan was needed to protect marmots.

“My research assessed population decline, and I found that since 2010 there has been a 95 percent decline in marmot populations. This is pretty staggering, and without intervention they will go extinct in the near future,” she said.

Dr. Jed Murdoch encouraged her to pursue this project further and apply for a Fulbright Research Grant. This year, Reilly was selected as a recipient of this prestigious award, along with eight other UVM students and alumni.

As a Fulbright Research Grant Selectee, Reilly will continue her research on marmots in Mongolia after graduation. She will develop a more thorough conservation plan, identify potential sites for reintroduction of the marmot, and create educational materials for local communities.

“There is a growing sense of urgency around saving this species because people value them culturally, and they are also such an iconic steppe species,” she said.

As an integral part of her research, Reilly talked with local residents in Mongolia to understand their connection to the marmot.

“I’ve always been passionate about wildlife conservation, but also love working with people,” said Reilly. “Both of my times abroad, some of my absolute favorite parts were befriending locals and learning the language.”

“I want to pursue research that seeks to protect wildlife but also incorporates humans into that equation and make sure that human livelihoods are being uplifted as well,” she said.

Kate Wettergreen
“I want to pursue research that seeks to protect wildlife but also incorporates humans into that equation and make sure that human livelihoods are being uplifted as well.”