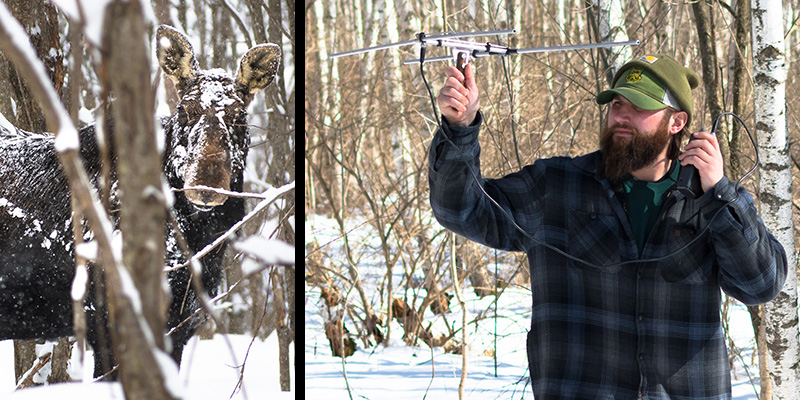 Wildlife and Fisheries Biology senior Christopher Lampart ‘19 blew into my office as though on a gust of wind. Wearing a well-worn State of Vermont Fish and Wildlife Department baseball cap and a woodsy beard, he landed in a chair and shared his story.

A first-generation, non-traditional college student, Chris came to the UVM Rubenstein School of Environment and Natural Resources to further his dream of a career working with trees and wildlife. His exuberance, experience in the woods, and academic achievements secured him a much-coveted spot as an undergraduate technician on a moose research project led by his academic advisor Associate Professor Jed Murdoch, graduate students, faculty in the Vermont Cooperative Fish and Wildlife Research Unit, and wildlife biologists with the state of Vermont.

“My grandfather exposed me and my brothers at a young age to the forest through wildlife tracking, hunting, fishing, logging, maple sugaring – you name it,” said Chris, a Starksboro, Vermont resident who could identify most trees, birds, and animal tracks in the woods by the time he was 12 years old. “I dreamed of becoming a zoologist and pictured my days collecting samples from a stream.”

Unsure of how to develop his passion into a profession, he graduated from high school and tried out many different jobs in his search for meaningful work. He finally found employment with tree and landscape companies, and practicing forestry and arboriculture sparked his longtime desire to work with trees.

At the age of 27, Chris took the leap and attended Community College of Vermont which opened his eyes to the diverse career options his associate’s degree in environmental science could lead to, including the fields of forestry and wildlife management. With encouragement from his CCV department chair Jarod Waite, Chris enrolled at the Rubenstein School to further his quest towards a career in natural resources.

He supplemented his coursework in wildlife and fisheries biology with volunteer work through the Vermont Fish and Wildlife Department. Mentored by state biologists, he gained valuable experience that enhanced his lifelong skills.

Working with biologist Alyssa Bennett, Chris learned to use radio-telemetry to locate and monitor Indiana bats and their emergence from summer maternity colonies in tree cavities. “Telemetry clicked with me immediately,” said Chris, “because I have always liked tracking animals.”

He also assisted the state with wildlife necropsies, an opportunity he discovered through his connections with wildlife biologist and veterinarian Walter Cottrell who consults with Vermont biologists and used to teach a wildlife disease course at UVM. “I have experience dissecting animals while harvesting wild game and wanted to learn the scientific elements,” said Chris.

But his ultimate experience came along in the spring of his first year in the Rubenstein School when Chris was selected as the undergraduate technician to help monitor moose populations in the Northeast Kingdom of Vermont. He jumped at the chance to assist state biologists and UVM researchers as they document the health of Vermont’s moose herd – increasingly under stress from climate change and rising winter tick numbers. 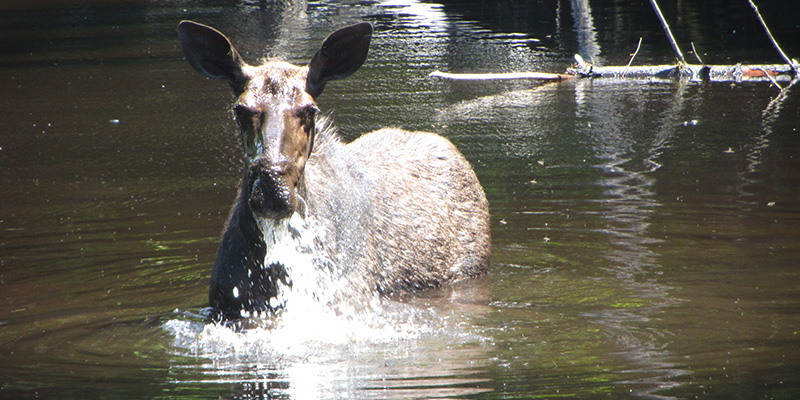 “During a typical field day, each of us gets assigned a group of moose to track,” said Chris. “I can close in on an animal’s location using telemetry and then creep up to observe and note the female’s behavior, activities, habitat, and whether she has birthed a calf.”

“Even on the worst day of black flies when you don’t want to breathe through your mouth unless you’re wearing a head net, I feel as though I am living a dream,” said Chris. “I love the challenge of creeping up on the largest wild animal in the region. I use everything I learned in school and from my own past interactions with wildlife.”

For the summer and fall after graduation, Chris has accepted a position on the field crew offered to him by state moose project leader Cedric Alexander ’78, a UVM Wildlife and Fisheries Biology alum. With Cedric as mentor, Chris enriched his research opportunity and his coursework by conducting an independent study of moose calf dispersal for a mammology class project.

Chris also pulled elements of the moose research into NR 206, a senior capstone course in environmental problem solving, and engaged several classmates in the work. Partnering with Jed, Chris and his team are producing an interactive map with multiple layers to identify potential corridors connecting core moose habitats in Vermont.

“My participation on the moose project has been life-changing for me. It is the epitome of what an experience as a wildlife student should be and why I made the sacrifice to go to college,” said Chris. “After a stretch of fieldwork in the Kingdom, my family and community pepper me with questions about moose. They want to see moose survive and thrive as much as I do.”

With a goal to become a big game biologist, Chris plans to apply to graduate school. He also considers starting his own business in forestry and landscaping to promote wildlife habitat.

Shari Halik
“My participation on the moose project has been life-changing for me. It is the epitome of what an experience as a wildlife student should be and why I made the sacrifice to go to college."