SARAH CARLETON has worked in the field of professional theater as actor, teacher, and director since receiving her MFA in acting from Catholic University of America in 1985.  Sarah is a certified Meisner Teacher from Larry Silverberg’s True Acting Institute. She studied physical theatre at the Celebration Barn Theatre with founder Tony Montanero, a former student of Marcel Marceau and Etienne Decroux; Melodrama with Aitor Basauri; Physical Comedy with Davis Robinson; Mask with Mark Olsen; Mask at the DellArte’ School of Physical Theatre in Blue Lake California; Melodrama and Neutral Mask with Emmanuelle Delpheche at the Movement Theater Studio in NYC.

She has been a member of Actors’ Equity Association, the union of professional actors and stage managers in the United States, since 1983 with professional credits in New York, Regional, and National Tours, with favorites being Brighton Beach Trilogy, Over the Pub, Always…Patsy Cline, Much Ado About Nothing, The Importance of Being Ernest, Crimes of the Heart, Echoes for a Wooden O, The Bald Soprano, Arsenic and Old Lace, Necessary Farce, Prelude to a Kiss, and The Taming of the Shrew directed by Maurice Daniels of the Royal Shakespeare Company. Directorial credits at professional and university theaters include Wait Until Dark, Baskerville, Almost Maine, She Stoops To Conquer, Greater Tuna, Or, Noises Off, The Arabian Nights, Our Town, The Beaux Stratagem, The Mouse Trap, Eurydice, Cloud Nine, Compleat Female Stage Beauty, Miser, Crimes of the Heart, and Assassins. At the height of the solidarity movement in Poland during the 1980s Sarah was hired by the United States Information Agency in Washington, D.C. to teach, perform and direct at Adam Mickewicz University in Poznan, Poland. During that time she directed Love of Life a devised play by her Polish students performed at the Aula Philharmonic Hall.

Sarah is a certified yoga teacher with the Kripalu Institute in Stockbridge, Massachusetts and a certified actor combatant with the Society of American Fight Directors. She has served as fight director/movement coach on productions at Vermont Stage Company, Saint Michael’s Playhouse, University of Vermont, and Saint Michael’s College.
While earning her MFA, Sarah was the recipient of the G. V. Hartke Award for Best Actress and was additionally awarded a Young Artist Grant for outstanding service to the performing arts. In 2010 Sarah was honored to receive the Meritorious Achievement Award in Directing from Kennedy Center American College Theater Festival for her University of Vermont production of You Can’t Take It with You. 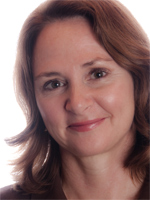 THE 010 - Acting I: Intro to Acting
Exercises to increase self-awareness and heighten perceptions of human behavior. Basics of script analysis and development of vocal and physical skills through practice and performance. Credits: 3.

THE 190 (A) - Theatre Practicum
Students actively involved in current department productions may earn credit for work on stage or backstage. Project proposals must be approved by department faculty and be of significant scope to qualify for credit. Prerequisite: Permission. Repeatable up to 3 hours. Credits: .5-3.

THE 200 (A) - Professional Preparation
Topics include preparing for auditions, portfolio reviews, interviews, and research papers for entrance into graduate schools or professional theatre venues. Prerequisite: Junior or senior standing and by permission only. Credits: 1-3.