The Theatre is named for Royall Tyler (1757-1826). Tyler was an American jurist and playwright, best known for writing The Contrast (1787). He was born in Boston, Massachusetts, but made Vermont his home where, during his lifetime, he served as Vermont Supreme Court Assistant Judge and later as Chief Justice.

Michele and Martin Cohen Hall for the Integrative Creative Arts 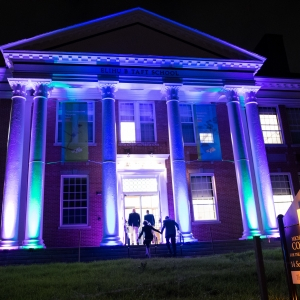 To meet the need for additional classroom and studio space for UVM’s growing range of arts programs, the College recently completed renovation of the former Elihu B. Taft  School in Burlington. The new Michele and Martin Cohen Hall for the Integrative Creative Arts was funded through several gifts totaling $7 million from Michele Resnick Cohen, UVM ’72, and her husband Martin Cohen. The facility includes art studios, classrooms, critique spaces, a gallery, an audio recording studio and a dance studio. A digital media lab, production studios, and equipment lending for digital art and film classes support exciting collaborations between the visual and performing arts.