After receiving his Masters from the University of Utah, Jeff was introduced to the world of professional theatre by the late Jo Mielziner, the Broadway designer who had great impact on the world of scenic design. Under his guidance, Jeff worked in his studio as an assistant on such projects as In Praise of Love with Rex Harrison and Julie Harris; Miss Moffat with Bette Davis, Dorian Harewood, and Nell Carter; Don Giovanni at the Met; and the ever expansive Denver Center for the Performing Arts in Denver. It was during this time that the essence of professional behavior was ingrained as well as understanding the importance of education.
As a scenic designer/scenic artist with over 400 professional credits to his name, Jeff’s work has been seen on the stages of the Cincinnati Playhouse in the Park, the Round House Theatre (Bethesda, MD), Clarence Brown Theatre (University of Tennessee), Santa Fe Opera House, Vermont Stage Company, where he is currently a resident artist, Dallas Opera, Augusta Opera, Houston Grand Opera, Palm Beach Dramaworks, Studio Arena (Buffalo, NY), Music Theatre of Wichita, Cleveland Playhouse, Playhouse on the Square (Memphis, TN) McCarter Playhouse (Princeton, NJ), North Shore Music Theatre, Yale Repertory, Eastman School of Music (Rochester, NY), New York City Opera, Goodspeed Opera House, Penn State as well as Broadway, Off-Broadway, and the silver screen. Jeff has designed for Industrial projects (Vermont Public Television, Jaguar, IBM, Got Milk, and Buliva Watches), numerous national and international tours and was one of three mural artists on The Remember the Children: Daniel’s Story exhibit for the National Holocaust Museum in Washington as well as the tour which extended for over twelve years. He has been the resident designer/production coordinator at the Candlewood Playhouse in Connecticut for five years and at Theatre by the Sea in Rhode Island for a total of nine years. He designed the national tours of Kiss Me, Kate (Networks Tours) and Singin’ in the Rain (Fourquest Entertainment), worked on the two seasons of the Showtime series The Brotherhood and painted on the Disney film Underdog.
Jeff has taught in a variety of circumstances: New York Consortium, CW Post College of Long Island, Western Connecticut State University, Brown University, and the University of Rhode Island. After 23 years at UVM and eleven years as chair of the Department of Theatre, Jeff sees the opportunities ahead as a shared adventure for students, faculty and staff. Proud of his association with America’s rich theatrical heritage, he believes we will forge an enlightened future in the arts for the Burlington community.
Jeff currently lives in the country side of St. Albans, Vermont with his husband Matt Sutkoski and dogs, Jackson and Tonks. Life is good.

Jeff is currently a union member of IATSE/USA. 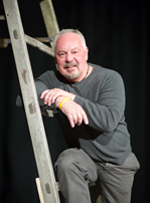 THE 030 - Fundamentals of Scenery
A hands-on introduction to the theory and practical application of the scenic elements involved in play production (drawing, building, and painting techniques). Includes Lab. Credits: 4. Lab Fee: $70.00. Fall and Spring Semesters.

THE 130 - Scene Design
A practical application of the elements, principles, and styles of theatrical stage design through research, sketching, and rendering techniques. Prerequisite: THE 030. Credits: 3. Lab Fee: $55.00. Spring Semester only.

THE 131 - Scene Painting Concepts & Application
Lab course to study practical application of painting techniques used in theatre, trompe l'oeil. Develops skills introduced in THE 030. Prerequisites: THE 030 & either THE 020 or THE 040 or permission. Credits: 3. Lab Fee: $70.00. Alternating Falls w/THE 230.

THE 190 (D) - Theatre Practicum
Students actively involved in current department productions may earn credit for work on stage or backstage. Project proposals must be approved by department faculty and be of significant scope to qualify for credit. Prerequisite: Permission. Repeatable up to 3 hours. Credits: .5-3.

THE 200 (D) - Professional Preparation
Topics include preparing for auditions, portfolio reviews, interviews, and research papers for entrance into graduate schools or professional theatre venues. Prerequisite: Junior or senior standing and by permission only. Credits: 1-3.

THE 230 - Advanced Scene Design
An in-depth study of the realization process for a stage design. A combination of script analysis, sketching, model making, rendering, and paint elevations, all as forms of communication. Prerequisites: 030, 130. Credits: 3. Alternating Falls w/THE 131.