What it Took to be Admitted to UVM 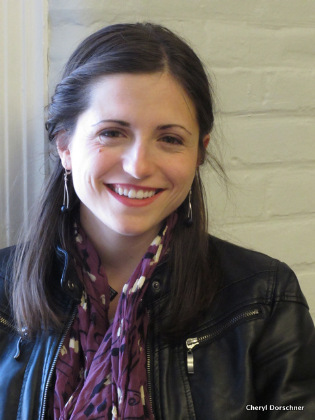 Her guiding light all four years at the University of Vermont has been her commitment to community service. She made volunteering and community building her priority while earning her Bachelor’s Degree in public communication. Plus helping others is an integral part of her jobs and also occupies much of her free time.

This is how UVM College of Agriculture and Life Sciences (CALS) Dean Tom Vogelmann introduced Deniz Sehovic to a small crowd gathered in the campus Grand Maple Ballroom for the annual alumni and friends dinner on May 9. He told her story as images of her past flashed on an oversized screen behind them. She was being honored with the College's highest student accolade: the Lawrence K. Forcier Outstanding Senior Award.

Way back, as a high school sophomore, Deniz Sehovic happened to attend a Hugh O’Brien Youth Leadership Seminar. Organizers noticed right that she has what the seminar board member, Daniel Luttrell, called her ability to, “help others to find their own drive and go on to do more in their communities,” Sehovic was tapped to help lead subsequent youth seminars for other high school sophomores.

Sehovic worked her way up in the organization, and is now the paid director of programming for these annual three-day events that draw more than 100 students from all over the state.

This is what she does. She learns by participating; she helps others and then she becomes a leader.

After graduating from Burlington High School in 2011, Sehovic arrived at UVM as a non-degree student. She took advantage of UVM’s GAP – that is, Guaranteed Admission Program – a chance for motivated students to demonstrate college readiness. She enrolled as a sophomore and declared public communications as her major. “I had my eye on that program when I arrived,” she told a reporter.

"Our College is well known for it’s service learning strategy," Vogelmann said, "that means we infuse our degree programs with courses that integrate instruction with meaningful, hands-on community service, because we believe this makes for better education, better citizens and better communities."

Sehovic took advantage of this.

She chose at least six CALS service-learning courses. In Field Experience Practicum, she turned an internship with Skillet Design and Marketing in Burlington into a job as its social media consultant.

She worked what the College calls CUPS – the office of Community-University Partnerships and Service Learning, where she gained an insider’s view of service learning while she was a volunteer with the King Street Youth Center.

Her senior capstone project with Vermont Community Garden Network in Burlington culminated the very day she stood before the audience gathered for the award, with an event called “Day in the Dirt.” Sehovic had pent the day today building and digging community gardens with schoolchildren. "I'm supposed to check her fingernails," Vogelmann quipped. They were perfect.

On campus she has been a teaching assistant, CALS Rep., Career Peer Mentor and Senior Resident Advisor. Sehovic has been active with Alternative Spring Break, orientation leader recruitment and intramural broom-ball league. In 2013 she received CALS’ Richard M. Holzer Scholarship. In 2014 she was named Senior Resident Advisor of the Year and her group was named UVM Residential Life’s Community of the Year. And became a member of UVM’s Tower Society.

Sehovic has said that she was drawn to service learning after a team of Habitat for Humanity volunteers built her own family’s house in Burlington in 1999.

Sehovic’s family had arrived in Vermont from Bosnia in 1997, when she was five years old. They became American citizens in 2003. Her mom and dad and twin sister Zerrin (also a senior who received an award the previous week at CALS Honors Day) and another sister attended the event.

As her Professor Sarah Heiss sums it up, “in four short years Sehovic has had an incredibly positive impact on the University of Vermont.

Sehovic was overly modest when she said, “I was barely admitted into UVM as a GAP student four years ago, and to have come this far and be recognized (is) so wonderful.” In her acceptance speech, a feisty Zehovic joked to UVM President Tom Sullivan that she thought he should re-examine admissions standards. Sullivan later grinned saying that Zehovic is a tribute to how well the GAP program works.

After graduation and a month of backpacking through Europe, Sehovic has a job lined up beginning in July working with social media at a health and lifestyle company in New York City.

Vogelmann had heard that sometimes the twin Sehovics have been known to trade places as a joke. "I hope that’s not the case tonight as I present the College of Agriculture and Life Sciences Lawrence K. Forcier Outstanding Senior Award to, I do hope, Deniz Sehovic."

Clearly, the right woman for the award stepped forward.

Cheryl Dorschner
I was barely admitted into UVM as a GAP student four years ago, and to have come this far and be recognized is so wonderful. ~Deniz Sehovic 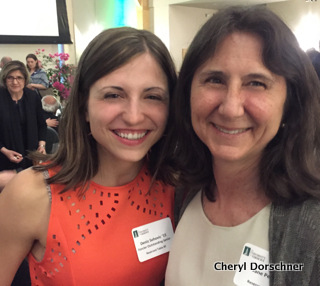 Deniz Sehovic, left, and her Professor Jane Petrillo, her advisor, nominated her for the award. 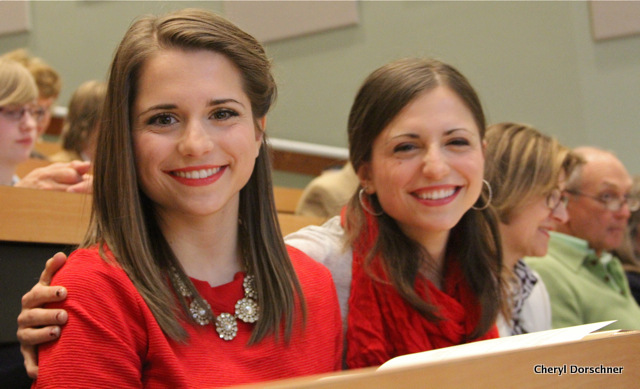 Twins and tricksters, Deniz and Zerrin Zehovic. Or is it Zerrin and Deniz? Wink.