UVM CREAM Rises to the Top

2018 marked a banner year for the UVM teaching herd – and the students who run it. 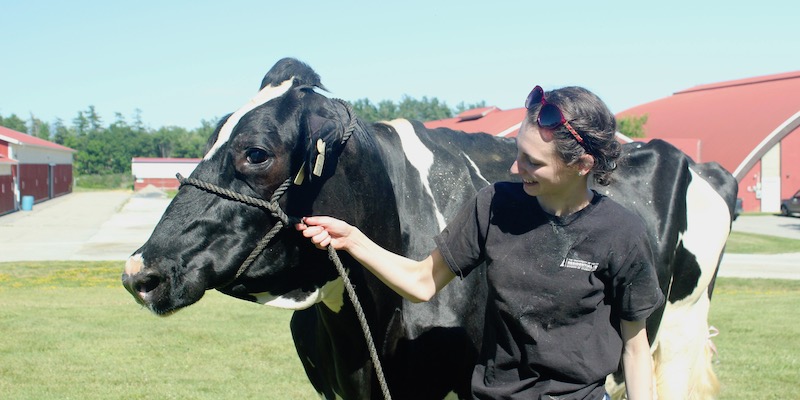 For decades, the University of Vermont student-run dairy herd has been known as one of the highest producing and genetically superior herds in Vermont. This year, a number of national awards from Holstein Association USA distinguish the UVM cows among the best in the nation.

Holstein cattle, easily recognized by their distinctive black and white markings, account for more than 90 percent of dairy cows in the United States. About 100 of them can be found less than a mile from campus at UVM’s Miller Education and Research Center where students of the UVM CREAM (Cooperative for Real Education in Agricultural Management) class manage all farm operations, including caring for the cows, milking and making breeding decisions.

“We’ve been trying to look holistically at the herd and breed the best cows possible,” said Lauren Spendley '18, a former CREAM member, CREAM advisor and pre-veterinary student who graduated with a B.S. in animal and veterinary sciences in December.

In today’s highly competitive dairy industry, several factors may increase a particular cow’s value over another, which breeders seek to improve with each generation. Each year, Holstein Association USA – the largest dairy breed organization worldwide – conducts an annual evaluation of all registered herds and recognizes those with outstanding genetics, milk production and ideal physical traits – three factors that contribute to the overall value of a particular cow.

For the fourth consecutive year, the herd was awarded the Holstein Association’s Progressive Breeders’ Registry award, which is given to the top 10 percent of herds nationwide that excel in maintaining a balance of high-quality milk production and desired physical traits. It also received the Progressive Genetics Herd award, which recognizes the genetic excellence of the herd overall and is a testament to the health of the cows and breeding decisions made by the CREAM students. UVM CREAM was the only herd in Vermont to receive both herd-level awards from the Holstein Association in 2018.

“These awards show that we’re succeeding in our goals and making really good breeding decisions. It’s really special to be part of a program that does that,” said Spendley.

Breeding for the Best

Modern advances in genomic analysis technologies enable dairy breeders to make highly calculated decisions in order to maximize the health, fertility and production of their herds. Over the past several years, CREAM students have made a conscious effort to breed for the most well-rounded cow, rather than focusing solely on physical attributes or milk production.

Their efforts are paying off, thanks in large part to the leadership and breeding strategy of herd manager Matt Bodette, said Spendley.

“Matt has been instrumental in helping us learn how to breed cows and his experience has led to the progress we’ve had in the last couple of years,” Spendley said.

In addition to the herd-level awards, three UVM CREAM calves ranked among the top 5,000 registered Holsteins in the country for Total Performance Index (TPI), a standard metric commonly used to compare dairy cows’ genetics to one another. TPI accounts for a dairy cow’s conformation, or build, milk production and various health indicators.

Bodette credits their success to the hard work of the CREAM students and to the excellent genetics in the herd.

“A well taken care of cow and well-fed cow will make more milk,” said Bodette. “To have high producing cows, you have to do the work, and the students do an excellent job of taking care of these cows.”

Gold Medal Dam is a coveted status awarded to fewer than .005 percent of registered Holsteins in the U.S. To be recognized as a Gold Medal Dam, a cow must have great physical traits, or conformation, and produce a certain amount of milk that is both rich in protein and fat. In addition, she must have at least three daughters with strong conformation and high, quality milk production, demonstrating her ability to transmit desired genetic traits to the next generation.

While Godiva died after giving birth last month, her legacy lives on through her daughters Gemini, Georgia and Gatsby, granddaughters Greta, Gracie, Giselle and Gabriella and great-granddaughter, Gouda.

Another notable cow is Mandrake, the oldest cow on the farm. With over 207,000 pounds of lifetime milk production to date, she is expected to become the highest producing CREAM cow ever.

“It’s really incredible. We’re not a very big farm, but we have a significant number of high-quality animals,” said Spendley, who will start veterinary school this fall.

In was the CREAM Program that drew both Spendley and fellow animal science major Maureen Whitney to UVM. Whitney participated in CREAM as a freshman. Now a senior, she has remained actively involved with the herd serving as president of the UVM Dairy Club and heading up the CREAM show team for three years in a row.

Last summer, the CREAM show team placed at several regional fairs and added the Tunbridge Fair to their show line-up, where they placed first for junior best herd.

“It’s rewarding to see where we’ve come from the first summer I was here to now,” said Whitney. But what was perhaps most rewarding for Whitney was the experience of leading the team, training fellow students on how to work with their animals and building up their leadership skills.

“I’ve gained a lot of knowledge about how to manage a herd, which is invaluable to me,” said Whitney, who is spending her last semester at the Miner Agricultural Research Institute in New York. After graduation in May, she will join Shelburne Farms as their assistant herd manager. “We were able to accomplish a lot and it’s exciting to see where the herd is going.” 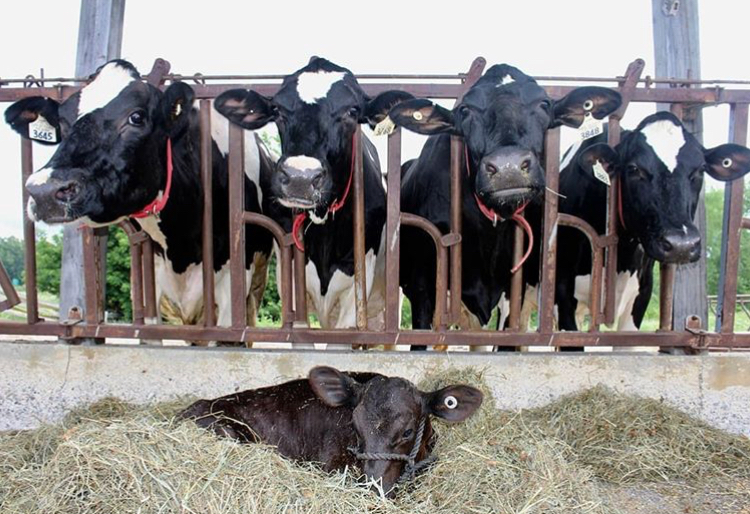