Garlic on Broccoli: A Smelly Approach to Repel a Major Pest 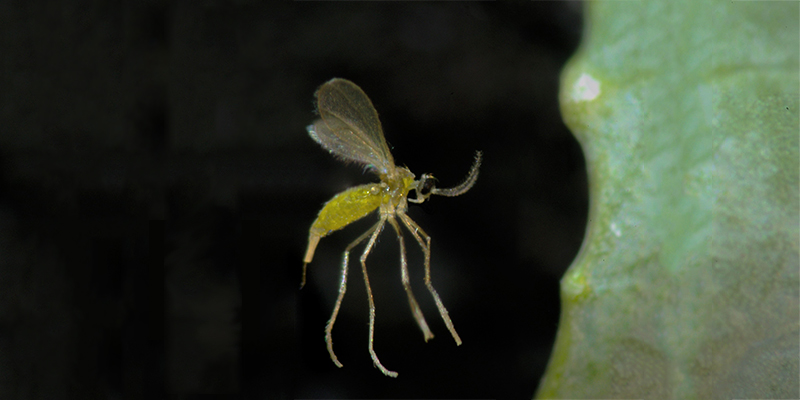 Measuring just two millimeters in length, the swede midge is a tiny fly that has become a major problem for vegetable growers in Canada and the Northeastern U.S. (Photo: Jorge Ruiz-Arocho)

Agricultural insect pests seek out familiar scents to find their plant hosts. However, they can also be repelled by odors from other plant species.

A new study from the University of Vermont published in Scientific Reports offers a novel framework for exploiting plant odors to repel insect pests. The study is the first to show how the similarity of plant odors and phylogenetic relatedness can predict insect repellency.

The team applied this conceptual framework to swede midge, a tiny fly that is becoming a major problem for growers of broccoli, kale and other cabbage-family crops in Canada and the Northeastern U.S. They found that particular essential oils – garlic, spearmint, thyme, eucalyptus lemon and cinnamon bark – were most effective at repelling the midge. The findings come as good news to organic farmers who are without an effective solution for managing the pest.

While essential oils have long been used in pest management, determining which oils are effective has followed a “trial by error” approach, said senior author Yolanda Chen, associate professor in UVM's Department of Plant and Soil Science.

“People often think more aromatic plant oils, like mint, basil and lavender will repel insects, but usually there is no rhyme or reason for choosing,” said Chen, who is also a fellow of UVM’s Gund Institute for the Environment. “It turns out that as we go along the family tree, plants that are more distantly related from the host plant are generally more repellent.”

Swede midge is a recent invader on vegetable farms in the Northeastern United States. Midge larvae must feed on the brassica plant family in order to survive, which includes many popular vegetables like broccoli, kale, cauliflower, cabbage, brussels sprouts, kohlrabi and collards. Making a mistake and laying eggs on the wrong plant would result in the death of the midge’s offspring.

“Smell plays a major role in host location,” said Chase Stratton, the study’s lead author, who recently completed his PhD at UVM. “Just one landing of one fly is enough to cause marketable damage,” he said.

The larvae “hijack the plant’s control system” resulting in distorted growth, such as headless broccoli and cauliflower, puckered leaves, and brown scarring. Unfortunately for farmers, the damage is not observable until it’s too late and the midge have already dropped off the plant. In areas where the midge has become well established, including parts of Canada, New York, and Northern Vermont, the midge can cause 100 percent crop losses.

To manage the midge, conventional growers have turned to neonicotinoid insecticides, which have been implicated in honeybee decline. With no methods for killing the pest, some organic farmers have simply stopped growing vulnerable brassica crops. This led Chen and Stratton to explore new control options for organic farmers.

“It’s hard to get away from using insecticides because they’re good at killing insects,” said Stratton, who is now a postdoctoral researcher at the The Land Institute in Salina, Kansas. “But plants have been naturally defending against insect herbivores for millions of years. Why are we so arrogant to think we can do it better than plants?”

Fascinated by the complexity of plant odors and species interactions, Stratton identified essential oils from 18 different plants that vary in their degree of relatedness to brassica host crops. He and Chen hypothesized that oils from plants that are more distantly related to brassicas would have more diverse odors and be more repellent. Comparing the chemical structures of the odors might hold clues for predicting repellency, they thought.

To test the theory, the researchers observed how female midges behaved when presented with broccoli plants that had been sprayed with each of the essential oils. They found the midges were less likely to lay their eggs on broccoli plants that had been treated with essential oils, compared to the untreated plants, and avoided flying towards certain oils more than others. In general, oils from plants that were more distantly related to brassicas on the plant family tree were more likely to repel the midge. They also found that odors that were more chemically different were also more likely to be repellent. However, the oil that was most repellent – spearmint – actually had odors more similar to the brassica crop.

“Biologically, it makes sense that midges would be able to detect and avoid these plants because the similar odors would make it easier for them to misinterpret these plants as hosts, which would be deadly for their offspring,” said Stratton. “For swede midge, garlic appears to be one of the most promising repellents, particularly because certified organic products using garlic are already available for growers.”

The study suggests a new sustainable solution for this new invasive pest and provides a novel framework for testing pest management strategies in other species.