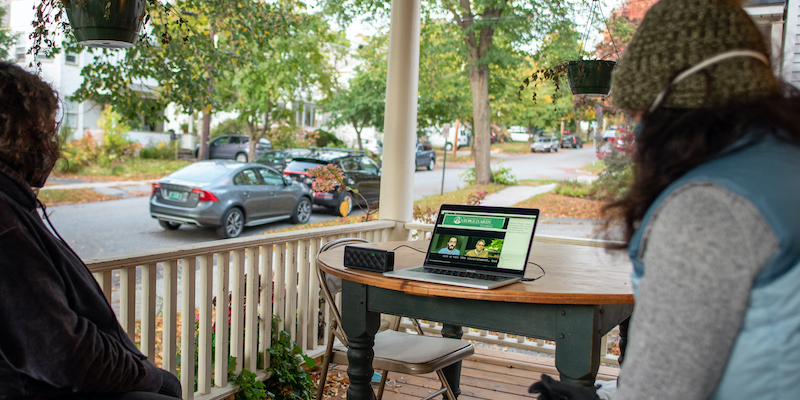 “Why is it that some people act on knowledge, and some people don’t?” mused award-winning author Jonathan Safran Foer in conversation with UVM professor Ernesto Méndez during the 2020 Aiken Lecture held virtually on October 8. This, Foer said, is one of the central questions in humanity’s ability to avoid the imminent, catastrophic consequences of climate change.

The author of several bestselling novels, Foer spoke to the UVM community about his latest book, We Are the Weather: Saving the Planet Begins at Breakfast, and the practical steps each of us can take to repair the planet.

Usually given as an on-campus event, this year’s Aiken lecture drew a record-breaking crowd: more than 2,200 people, tuning in to a live stream of Foer speaking from his apartment in Brooklyn and Méndez from a Continuing and Distance Education production studio in Lafayette Hall.

Foer’s book arose out of a deep personal struggle he was experiencing as a person living in this moment of climate crisis with full awareness of the science and yet feeling powerless, lost and alienated. It is a struggle shared by many, and is perhaps especially present among the nation’s youth and college aged students.

Following the themes of his new book, Foer’s lecture unpacked his own inability to accept or believe, at an emotional level, the bleak outlook for the future of the population and the planet if major steps are not taken to reverse the impacts of climate change.

“We know that what the climate scientists are saying is true, but that’s not the same thing as believing it’s true,” said Foer. “Knowing is an intellectual acknowledgment. Believing is when that acknowledgement moves from your brain to your heart.”

Foer said that shift, from knowing to believing, is ultimately what’s needed to motivate action. While combating climate change requires systems-level change through policy and governance, it also depends on the individual actions of people. In speaking with Mendéz, Foer offered several pieces of advice to those watching for taking action in their own lives, starting now. His suggestions are summarized below for readers far and wide.

Be aware of your choices.

Taking action starts with acknowledging that actions have impacts and are the result of the conscious choices we make – what we eat, where we buy our food, how we get to work. Foer noted that both locally and globally, the people most impacted by climate change are those who are least responsible for it. Those with the privilege of choice have the greatest responsibility to participate in the solution. Foer hopes his book will “encourage awareness of our roles [in the causes of climate change] and effect change."

Make a plan, and know your limits.

Foer encourages everyone to sit down as an individual, with their partner or family, and write down specific actions they can take to reduce their own environmental footprint. When it comes to individual actions, the four areas in which Foer says we can make the greatest impact are choices we make around flying, driving, controlling overpopulation and eating. But asking someone to stop flying, driving, having kids and eating meat is not realistic or sustainable. “We need to have rigorous conversations with ourselves about what our own limits are. They’re not going to be the same for everyone,” said Foer, who has become a vegetarian but can’t imagine the idea of never getting on an airplane again. “Be sure you are setting yourself up for success and not failure.

While Foer acknowledged the exceptional work of “noble farmers,” including many in Vermont, working to build sustainable animal production systems, 99.9 percent of animals consumed in America are raised on resource-intensive factory farms, which are a major contributor to harmful greenhouse gases and pollution. According to a 2018 study published in Nature, citizens of Europe and the U.S. will need to reduce meat consumption by 90 percent to avoid a climate collapse. Eating less meat doesn’t require becoming a vegetarian, says Foer. It can start with avoiding meat a few days a week or avoiding industrial meat, and maybe, eventually, eating as little meat as possible. Most importantly, Foer says to make a choice that is sustainable.

Hearing the topic of discomfort arise throughout the conversation, Méndez noted the importance of being comfortable with discomfort in order to address many of the issues the nation is facing, from racial tensions to climate justice. Foer acknowledged the need to create communities that allow for a process to move from uncertainty and discomfort to a place of clarity. “I worry that on college campuses right now we have this insistence of clarity. What you have is a lot of people performing clarity, and that is unhelpful. It has to be okay to be confused, even about the most important issues,” said Foer.

Of all the actions we can take, Foer says voting is most important. “We need to make the kinds of changes that I mentioned, but we can’t actually save the planet only by making those changes as individuals, we need systemic change, we need legislative change,” said Foer. That change requires having leaders in power who share those values.

The University of Vermont’s George D. Aiken Lectures are a permanent tribute to the former Dean of the United States Senate and Governor of Vermont for his many years of service to the people of the state and nation. The 2020 lecture was co-hosted by the UVM College of Agriculture and Life Sciences and UVM Continuing and Distance Education.