All Work, All Play, All Good Works 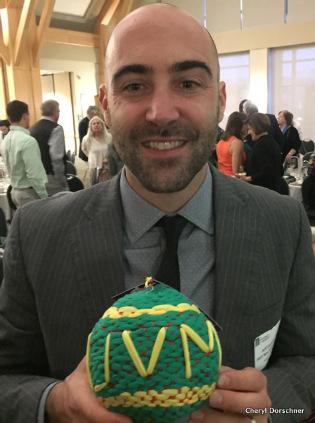 Jeff DeCelles '03, developer of a program that uses soccer to teach life lessons and developer of the Rag Ball, received CALS 2015 New Achiever Award on May 9.

Jeff DeCelles, of Sea Point, Cape Town, South Africa, is an educator and an entrepreneur. He combines work and play. And he’s ingenious in using something fun and familiar – soccer – as a world ambassador and a metaphor to score victories over HIV.

As a UVM undergrad, DeCelle had traveled extensively in Guatemala and was an avid enthusiast of international community development and soccer. But back then few people had made the connection between the two. As a community development and applied economics (CDAE) major, DeCelle explored the use of soccer in development projects among the sugar plantation workers’ communities, called bateys, in the Dominican Republic. That led to DeCelle co-founding, with three other UVM students, (one whom later became his wife) the nonprofit Batey Libertad Coalition that uses soccer to confront socioeconomic problems facing Haitians. They started with UVM student volunteers and grew the organization to partner with other institutions. Professors Jon Erickson and Pat Erickson were also instrumental of the growth of this project at UVM and continue to teach a travel course during break that explores the use of soccer as an instrument for social change.

That year DeCelle joined a similar international nonprofit organization called Grassroots Soccer. As its program director, he set up offices and developed programs in the Dominican Republic, Africa and India. He rose through the organization over the next four years, and meanwhile, created a partnership with Harvard School of Public Health.

In 2008, Jeff DeCelles received his Masters of Education in International Education Policy from Harvard University, where he was a Catherine B. Reynolds Foundation Fellow for social entrepreneurship.

Now he is in charge of developing Grassroots Soccer’s innovative HIV prevention curriculum based on the latest public health research. His significant accomplishments and successes that have grown out of a soccer-driven method of engaging young people in sport and empowering them to achieve important life goals, including health, wellness and financial literacy. He helped expand Grassroots Soccer geographically and with new curriculum in gender equality, financial literacy, skills and income generation. As a result, Grassroots Soccer is a centerpiece of international development worldwide that is recognized with funding from the Bill and Melinda Gates Foundation and many others.

In 2009, he co-founded a spin-off business, so to speak, called Ragball International in Cape Town, South Africa. Here young people are paid a fair wage to produce hand-made soccer balls from recycled materials that are sold locally and through the world’s largest soccer retailer.

Jeff DeCelles makes his career look intuitive, but on close inspection the elements that make up his curriculum and his business are the touchstones of CALS, and especially CDAE, curriculum: leadership and management, environmental sustainability, civic and social responsibility, economics and business development.

“His ability to advance complex development projects and build partnerships across academic, professional and cultural realms is exceptional,” says Professor Dan Baker who was his professor and advisor at UVM.  He adds, “I see no sign he is slowing down. Jeff DeCelles is courageous, a critical thinker and ambitious for the advancement of the greater good.”

For these reasons, and many more, Jeff DeCelles received the 2015 UVM College of Agriculture and Life Sciences New Achiever Award on May 9 at the College's annual alumni and friends dinner at the Davis Center on campus. The award was one of five alumni awards presented by CALS Dean Tom Vogelmann at the event. 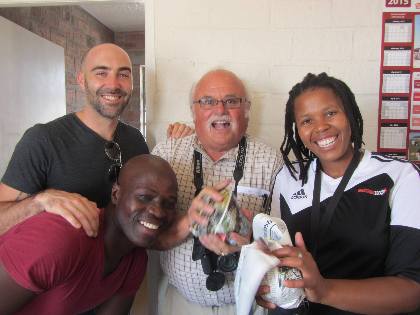 Jeff DeCelles, left, and friends were visited by Jeff's former professor and friend Fred Schmidt, center, in South Africa this spring. Schmidt hosted DeCelles when he returned to UVM to receive the New Achiever Award in May.