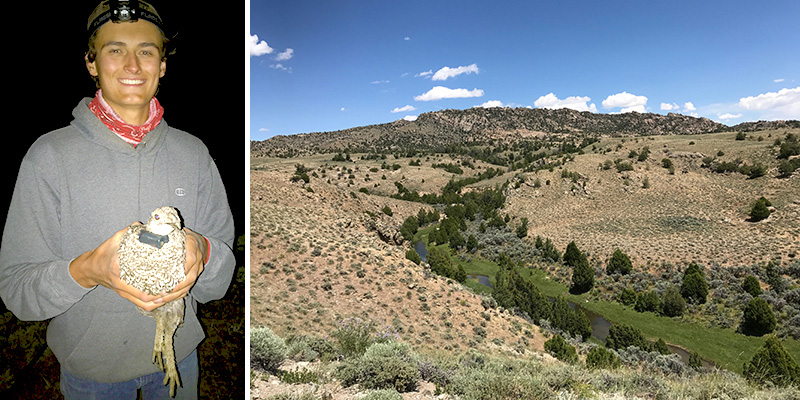 Rubenstein School student Kevin Ostrander learned to use radio telemetry to track collared sage grouse during a summer research internship on the sagebrush steppe of Wyoming.

He has enough credits, from high school AP courses and 17-credit semesters, to graduate a year early. But, Kevin, who double majored in Wildlife and Fisheries Biology and in Environmental Sciences, decided to further his excitement for learning in advanced classes during his senior year.

“I want to take advantage of all four years and get in some upper-level courses,” he said, with his sights set on graduate school.

An avid hunter and fisherman, Kevin grew up north of Albany, New York in a town called Halfmoon. In the Capital Region, he witnessed the loss of forest land to development. “I saw a lot of taking away of forests but not a whole lot of conserving,” he said. “That’s what drew me to an environmental major.”

He paired his wildlife curriculum with a conservation biology concentration in the Environmental Sciences program because it combined his passion for wildlife and his drive to learn all he can about habitat restoration and conservation. He also joined the student chapter of The Wildlife Society – a UVM club – and became event coordinator and now president.

“Anyone can go to school and get a degree, but it’s relationships you make that help you land a job,” said Kevin. “Professors and instructors in the School appreciate when you are putting your best foot forward and are more than willing to help you succeed.”

He acknowledges his academic advisor, Associate Professor Jed Murdoch – also the Wildlife Society chapter’s faculty advisor – who has an open-door policy. “Jed was always there to offer advice or just to talk,” said Kevin. “He gave me space to run the chapter and grow and learn in my own way.”

Early involvement in the chapter and networking through Jed, who connected him with a former student, helped to single Kevin out for a summer internship after his first year. He interned with Rubenstein School wildlife and fisheries biology alum Josh Leonard ’12, a PhD student studying sage grouse brood success at the University of Wyoming. Kevin roamed Wyoming’s vast sagebrush steppe, tracked 120 radio-collared hens to monitor hen and young survival, and conducted vegetation surveys to help better understand grouse habitat.

“Sage grouse nest beneath sagebrush and lay ten to twelve eggs of which an average of six to eight survive to hatch,” said Kevin, who learned all there is to know about sage grouse and the field methods used to study game birds. He gained experience collaring hens, operating radio telemetry, driving off-road vehicles, and working alone on the expanses of public land surrounding remote Jeffrey City, population about 50.

His experience and newfound talents led to a position the following summer on a research project with South Dakota Game, Fish and Parks. Kevin applied his expertise in radio telemetry to monitor wild turkey hens, nests, and young on expansive agricultural lands. His background in hunting and fishing helped in his conversations with landowners when requesting permission to conduct research on private lands.

Kevin brought his skills back to Vermont to share with other wildlife students. Together with Jed’s graduate students, who are tracking and monitoring radio-collared moose populations in Vermont’s Northeast Kingdom, Kevin led a Wildlife Society chapter workshop on radio telemetry for undergraduates.

“The club helps students to get experiences they don’t get in the classroom and make connections with graduate students and professionals in the field,” said Kevin.

He plans to work in seasonal wildlife positions for a year after he graduates from UVM and then go to graduate school. “I would like to study small game species like wild turkey if I can,” he said. “They don’t get as much attention as some of the more charismatic big game species.”

For now Kevin starts his first seasonal position in May with the Vermont Fish and Wildlife Department. He will work with their fisheries team on Lake Champlain through November.