The Northern Forest: Seeing Its Changes with Orbiting Eyes

Is climate change hurting the sugar maple? A professor and her students build new insight with satellite imagery

Spanning some 400 miles, the vast Northern Forest crosses upstate New York, Vermont, New Hampshire, and northern Maine — and research teams at the University of Vermont Rubenstein School of Environment and Natural Resources are making new uses of data gleaned from satellite imagery to learn how climate change, and other pressures, may be affecting sugar maples and their neighboring tree species in the forest.

“The traditional approach to doing ecological research is to have certain locations or plots that we go to and study — but that really only tells you what is happening at a single place. And we have so much variability across this landscape,” says Jennifer Pontius, a research associate professor and director of the Environmental Sciences Program in the Rubenstein School. Field studies are still important — but, she says, “If we really want to understand what is happening, satellite imagery gives us that much larger perspective.”

Pontius works with graduate and undergraduate students to collect, study, and interpret geospatial data collected by imaging satellites as they orbit on paths that traverse the Northern Forest. She and her associates work through the Spatial Analysis Lab, a research facility at the Rubenstein School that specializes in using geospatial technologies, such as satellite imaging, to develop new applications for managing natural resources and understanding biodiversity.

“Because a satellite is constantly orbiting the globe, it comes back on a regular return interval, so it gives you a time series,” Pontius says. “This is a really great opportunity to examine change. These satellites have sensors that can see wavelengths far beyond the visible spectrum — and that’s where a lot of information, particularly about vegetation, is held.”

“If you think about how a plant absorbs and then reflects light, it tells you a lot about the structure and the chemical composition of that plant,” explains David Gudex-Cross, a Ph.D. student who has been working with Pontius to look at changes in Northern Forest tree canopies. “You can tell when the leaves are photosynthesizing, if the leaves are stressed. You can tell a lot about forest health, forest vegetation density, changes, and fragmentation in the forested landscape.”

“We Are Seeing Changes”

Pontius is a research ecologist with the U.S. Forest Service and principal investigator with the Forest Ecosystem Monitoring Cooperative, a partnership effort between UVM, the Vermont Agency of Natural Resources, and the U.S. Forest Service. Her work integrates these sophisticated imaging technologies with fieldwork and other traditional means of gathering natural resource data. “You really have to be a bit of a jack-of-all-trades,” she says with her characteristic happy laugh.

Her collaboration with Gudex-Cross has turned up an unexpected finding: for reasons not yet fully understood, sugar maples in the Northern Forest appear to be losing ground in their coexistence with American beech, a species that commonly shares the sugar maples’ locations.

Not only are sugar maples symbolic of the Northern Forest, they’re vital to the economies of Vermont and its forestland neighbors because they produce the sap that becomes maple syrup. Through complex, exhaustive analyses of satellite images and the data they produce, Pontius and Gudex-Cross have found that maples, in their competition with beech, appear not to be thriving the way they have in years past.

“We’re not necessarily seeing dead trees, but we are seeing changes in the composition of the canopy,” Gudex-Cross explains. “Beech appear to be outcompeting sugar maple in many areas historically dominated by the latter. Long-term, that may result in mortality.”

Change in basal area of sugar maple from 1985 to 2015 in northeastern New York and northwestern Vermont.

Why is this happening? “David pulled in a whole bunch of spatial environmental variables, to try to answer that question,” Pontius says.

And although the causes aren’t wholly clear, “climate was a major factor,” says Gudex-Cross. Climate change can’t be said to be killing the sugar maples, he adds — “but it definitely is causing changes in those competitive dynamics. It’s altering who is going to win out in the long term.”

The project found similar changes at higher elevations, between the evergreens balsam fir and red spruce. Balsam fir, the classic Christmas-tree species, appears to be waning as its compatriot species red spruce expands.

So far at least, Pontius says, “These are subtle changes. If we can see them early enough, we can change our management strategies to help mitigate — or prevent — some of these problems.”

Undergraduates also join with Pontius through the Spatial Analysis Lab research. Emma Tait ’17, a UVM geography major who minored in geospatial technologies in the Rubenstein School, worked on a project with Pontius and Shelly Rayback, of the UVM Geography Department, that used data gathered from both remote sensing and field data collection to create a new model for predicting trends in forest growth.

“The most exciting thing,” Tait says, “was that it worked! We got results that were statistically significant for individual species. I began the project with only a small understanding of statistics,” she recalls, “and a slightly better (though still small) understanding of dendrochronology,” the study of growth rings in trees and what they reveal. “By the end, I knew significantly more about statistics, about dendrochronology, and about how they worked together with the remote sensing data to create the model.

“The most meaningful thing was the amount I learned,” Tait adds. “It was also very rewarding, after the model had been made, to apply it to remote sensing images and be able to map predicted forest growth trends and understand what the map meant and why it was significant. I probably learned more through this project than I ever did — or would have — in any class.” 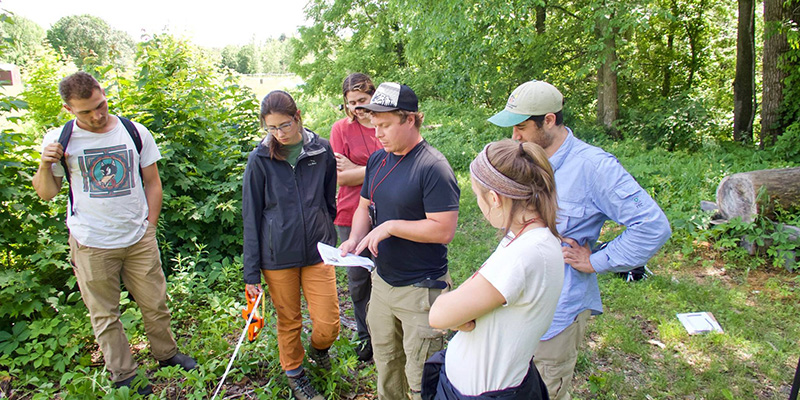 Rubenstein School Ph.D. student David Gudex-Cross (center) conducts his dissertation research on changes in forest health and vegetation cover across the Northern Forest landscape of Vermont and the Northeast.