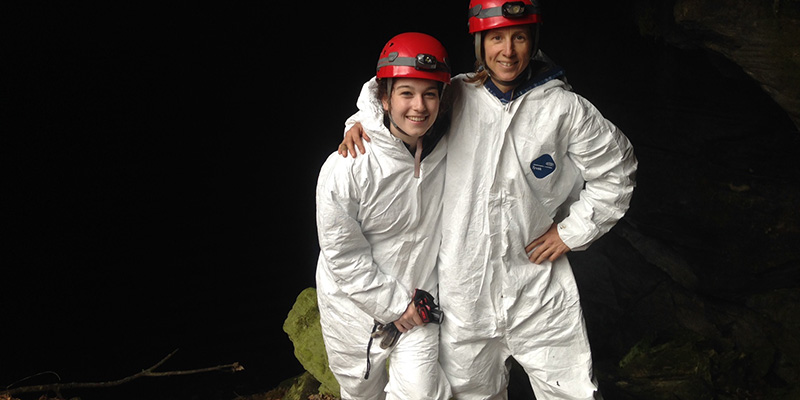 During the summer of 2017, I interned with the Vermont Department of Fish and Wildlife’s (VDFW) small mammals biologist. The focus of my internship was studying bats around the state of Vermont. My tasks as an intern largely fell into three categories: bat trapping, acoustic detector work, and maternity colony monitoring.

Bat trapping took place on various sites around the Green Mountain National Forest. We were hoping to trap a reproductive female northern long-eared bat, which is endangered in Vermont, to track her using acoustic equipment. We did not catch our ideal bat, but I did have a chance to work closely with four bat species out of Vermont’s nine bats: little brown bats, big brown bats, eastern red bats (my personal favorite), and northern long-eared bats. Through trapping, I learned how to work with mist nets, a popular trapping method for bats as well as birds. I also learned proper handling techniques for bats, including body and reproductive condition assessment.

Acoustic work involved placing small detectors attached to microphones around various forest sites. The purpose was to record the calls of northern long-eared bats. After retrieval of the devices, the recordings were analyzed using a sonogram program to see what species were in the area.

The maternity colony monitoring program assists to monitor little brown bats, which are endangered in Vermont. This species roosts in structures such as houses during the summer. Counting colony populations as they emerge to feed in the evening allows the VDFW to track populations and evaluate the ongoing effects of whitenose syndrome. I assisted with counts at several sites, as well as coordinated volunteers throughout the summer to monitor other locations. At the end of my internship, I prepared a report on the maternity colony monitoring program and little brown bat populations.

Through these experiences, I learned how to work with the public and with biologists from different agencies and backgrounds. I was also exposed to various forms of field work applicable to the field of wildlife biology, from setting up mist nets to driving large trucks to using what resources are available at field sites. To all future interns, the most important lesson I learned is to be self-reliant and have confidence in one’s abilities. I often worked alone and at night, so learning to be comfortable in unusual environments is a key factor in this type of internship. Additionally, confidence to ask questions and ask for clarification is critical to a successful internship experience. Overall, my internship was an incredible look at working in the field of wildlife biology, and I hope to use many of the skills I learned in the future.