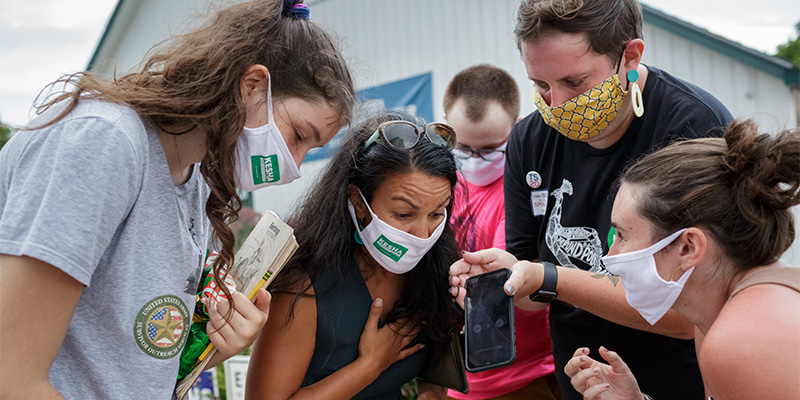 Kesha Ram ’08 won a bid for election to the Vermont Legislature in the state’s primary held August 11, 2020. She is now set to be the first woman of color in the Vermont State Senate. In the Chittenden District, the state’s most hotly contested Senate primary race, Kesha was second, only behind one of several incumbents in votes received.

This was an equally exciting time for University of Vermont (UVM) undergraduate Haley Sommer ’21, who played a large part in the successful campaign as a lead staffer. She first met Kesha who was a guest speaker in a UVM course.

“Hearing her speak, I really resonated with her messages around environmental justice,” said Haley, an environmental studies major in the Rubenstein School of Environment and Natural Resources, Kesha’s alma mater.

Kesha was the first Rubenstein School student and first woman of color to serve as president of the UVM Student Government Association and graduated with degrees in natural resource planning and political science in 2008, the same year she was elected to the Vermont House of Representatives. She is currently an equity and inclusion consultant serving school districts and other organizations and a former preschool teacher, legal advocacy director for Steps to End Domestic Violence, and civic engagement specialist for the city of Burlington.

“I was overwhelmed by the positive support that Kesha had garnered throughout her time in the legislature and her work surrounding equity,” said Haley.

Haley reached out to Kesha to become involved with her work, and they met for coffee. When Kesha made the decision to run for State Senate, she offered Haley a position on the campaign. Haley started her internship in January 2020 and in June, transitioned into a lead communications role for Kesha’s run for Vermont Senate.

“Being around this positive energy gave me hope for the future of our state and was especially rewarding when we exceeded all of our expectations on Primary Day,” said Haley who will continue her work as communications and outreach director on the campaign through the election in November. “This was a demanding but refreshing opportunity that allowed me to see first-hand the many ways that change can be made within our state.”

“She helped to keep everything and everyone organized and was indispensable in all facets of the campaign.” said Kesha. “Haley was easily the best, most committed campaign staffer I've ever had. She is a great example of leadership and hard work for the next generation.”