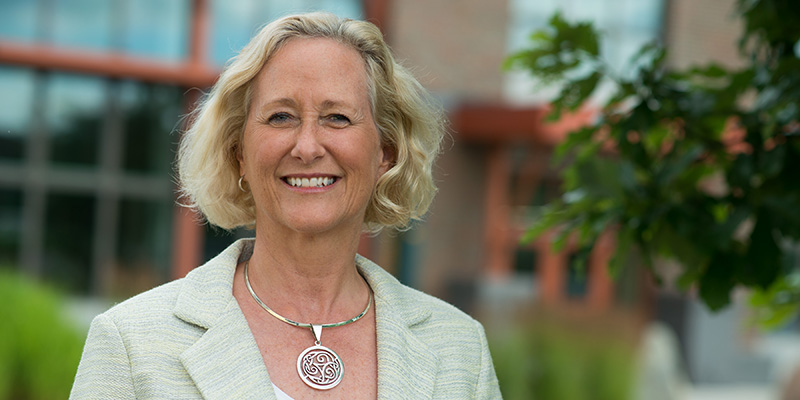 This spring marks the five-year point in serving as the dean of the Rubenstein School. I have had the honor and privilege of leading an extraordinary team of faculty, staff, and students who embody the School. I have never encountered a team more committed to excellence and student success, and that cares so deeply about each and every student. The many hours spent with students—coaching, mentoring, learning and discovering, inside and outside, rain, snow or shine—are a true testament of the dedication of the School to its students. This community has become revered and its reputation has grown. There can truly be no better fabric, than the one which the School has woven, that continues to hold faculty, staff, and students in a close-knit community founded on achievement, respect and camaraderie.

This year also marks the beginning of significant leadership transitions on campus with the arrival of President Suresh Garimella and the departure of President Tom Sullivan and Provost David Rosowsky. Both President Sullivan and Provost Rosowsky were instrumental in ensuring the continued success and growth of the Rubenstein School. Within the School, Associate Dean Allan Strong will conclude his administrative leadership role, after eight years, and return to his passion of teaching in the Wildlife and Fisheries Biology Program. We are excited for him to jump back into the classroom, while continuing his deft leadership of our diversity and equity initiatives. Our new associate dean, Nate Sanders, is primed to take the helm. Nate has already developed a steady following through his visible and successful leadership of the Environmental Program.

Over the last five years, the Rubenstein School has become a nationally recognized school of the environment and aspires to be in the top three in the country, among public institutions. We are proud of the outstanding progress and off-the-charts productivity.

The School’s reputation is built on the academic excellence of both the undergraduate and graduate programs. Its highly engaged curriculum, interdisciplinary focus, and intensive advising focuses on preparing students to become environmental leaders. Nearly 71% of our undergraduate students graduate in four years, 94% of undergraduates find employment within four months of graduation, while 40% continue on to graduate school at some point in their careers. Rubenstein School graduates work in all sectors of society: government, education, nonprofit, and, increasingly, the private sector.

The Rubenstein School has grown in both excellence and in size. Its predominantly out-of-state undergraduate body (85%) represents 39 states, an increase in geographic representation of 56% over the last five years. The School consistently yields the highest proportion of undergraduate applicants (29.4% in 2019) on campus and those who are among the best academically prepared. Over this same period, undergraduate enrollment has grown 25% (currently 745 students), while graduate enrollment has grown 41% (currently 120 students).

Our flourishing graduate program now supports more than 80 research-based PhD and MS students in Natural Resources and nearly 40 students in our nationally-acclaimed, two-year Master’s of Professional Studies in Leadership for Sustainability. Our graduate students go on to careers in academia, research, industry, and leadership positions in nonprofits.

Faculty research productivity has risen significantly over the past five years with an increasingly international profile and with scholars who are at the top in their field. Total extramural funding has increased nearly 49% over the past five years. Tenure-track faculty each published an average of three papers a year in 2015 and four papers in 2018. These increases are a result of hiring outstanding new faculty and providing better support of all faculty through infrastructure enhancements such as additional grant writing and editorial support.

The strong community and student body serve as catalysts on campus to promote the iconic environmental theme for the entire University. The Environmental Program, one of the oldest in the nation, is housed within the School and oversees the fifth largest major on campus. The School remains actively committed to diversity, equity, and inclusion and leads the campus in a School-wide initiative to generate inclusive pedagogy that builds an empowered and welcoming climate for all students.

In closing, I will end where I began. There can be no better School of Environment and Natural Resources, no more dedicated faculty and staff than those in the Rubenstein School. I thank each and every one of you—faculty, staff, students, alumni, and friends—for a fantastic five years and eagerly look forward to the next five years.