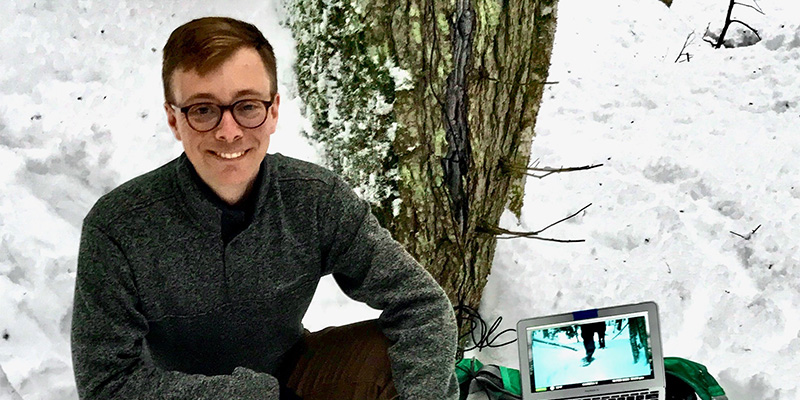 Rubenstein School PhD candidate Joshua Morse uses wildlife cameras to capture images of eastern coyotes, the subject of his research and of the community stories he is gathering to help us better understand the values Vermonters associate with this controversial species.

Joshua Morse, PhD candidate in the University of Vermont (UVM) Rubenstein School of Environment and Natural Resources, has spent his life exploring and studying the outdoors and what lives in the woods. His most recent work, “Coyote Stories,” captures the widely varying perceptions of Vermonters towards eastern coyotes and enlists high school students to help gather those stories from community members.

“When I tell someone about my research on coyotes, people want to tell me about their experiences,” said Josh. “They enjoy telling stories.”

Josh has his own coyote stories. An avid fisher, birder, and hunter, he grew up in Massachusetts where he roamed several thousand acres of state and conserved land behind his great grandmother’s house in the Berkshire Mountains. At about age 11, he encountered two coyotes while in the woods with the family dog. Fascinated, Josh watched as the dog played with the coyotes.

His second experience occurred many years later during graduate school, in the same woods with his own dog. He came across a freshly killed deer on a frozen beaver pond. Although he saw no coyotes and knew it was rare for them to take down an adult deer, he sensed the wariness of his dog, which reacted with hackles raised.

“The stark contrast between my two brushes with coyotes—beautiful versus threatening— influenced my decision to develop the Coyote Stories project,” said Josh, who uses his own stories to introduce students to his project and to illustrate the range of peoples’ possible reactions to coyotes.

In Vermont, various interest groups differ in their stance on eastern coyotes and how they think the species should be managed. Josh is building a state-wide dataset, as part of the project, to answer research questions about peoples’ experiences with and values connected to coyotes to inform policymakers and wildlife managers.

“As a social scientist, I want to figure out what makes people have such strong and mixed feelings about coyotes,” said Josh, who conducts his research with Rubenstein School Assistant Professor Rachelle Gould and is a graduate fellow in the UVM Gund Institute for Environment. “I chose to study coyotes in Vermont to give back to the woods of New England and its wildlife and residents through research, community engagement, and environmental education.”

He reached out to high schools across Vermont and found teachers interested in developing a curriculum that allows students to learn about coyote ecology and how to be social scientists in their own communities.

To better represent coyotes to the students during his ecology sessions, Josh shows them footage from wildlife cameras he sets up in the woods, fields, and wetlands of Vermont. 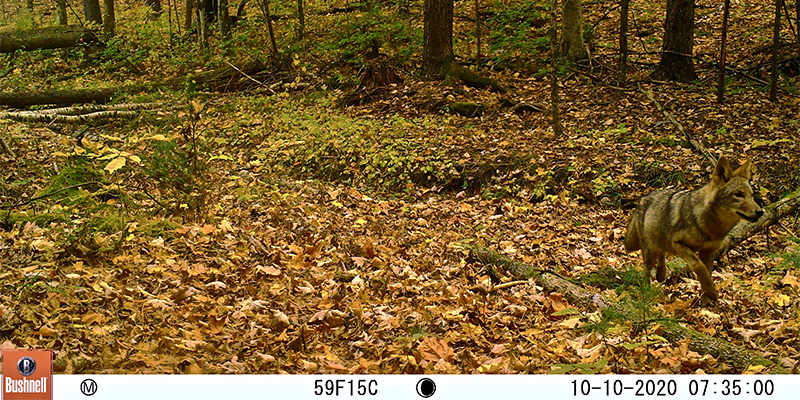 His cameras have captured coyotes in Winooski, Vermont and in more remote Addison County and Franklin County. His wildlife videos can be viewed on the Gund institute’s YouTube page.

Josh trains students to conduct interviews to discover peoples’ values associated with coyotes and to compile responses into stories. Students interview one accessible person they know well, such as a friend or family member, and one person they don’t know well who brings some form of diversity—cultural, demographic, or experiential—to the project.

“Students found this challenging, but they have succeeded at it,” said Josh, who has accumulated a little more than 100 stories so far, a good start to this oral history project.

Josh extracts peoples’ attitudes from the stories to help understand Vermonters’ wildlife values. He and his students submit the stories to the Vermont Folklife Center to be preserved as part of a public collection once the project is finished.

To date, Josh has completed work with a high school in Chittenden County where he collaborated with 60 students in either very small classes or large AP Biology courses. He continues to collaborate with four more schools in Addison, Franklin, Orange, and Orleans Counties and has lined up other interested schools. He hopes to work with as many public high schools in as many Vermont counties as possible to get a broad geographic representation across the state.

In late winter 2020 with the arrival of COVID-19, Josh began a new chapter for “Coyote Stories.” He transitioned to online work with the schools, and students now conduct interviews remotely.

“Having to pivot to virtual interaction with teachers and students has been tough but extremely rewarding to see teachers so glad that this work can continue,” said Josh. “Through it all, I have been very impressed by students who completed their interviews and mastered the difficult skill of listening without judgment to stories that can be quite contentious.”

Josh observes high levels of enthusiasm by high school students and undergraduates for their surrounding landscapes, wildlife, and human communities.

“There is a lot of talent and passion in younger generations to address the challenges facing the New England woods,” said Josh, who earned his bachelor’s degree in biology from Oberlin College and his master’s degree from Yale, where he turned his attention to the human side of environmental conservation.

His Coyote Stories project is funded partly by a National Geographic Society Early Career Grant, which offers individuals, like Josh, who are just getting started in their fields, an opportunity to lead a project. The Society awards grants to individuals working in conservation, education, research, storytelling, and technology.

In addition to the Vermont Folklife Center, Josh partners with the Vermont Fish and Wildlife Department, Vermont Trappers Association, and Cold Hollow to Canada.

“I am hoping my research will give policy makers and resource managers the tools to understand the diverse ways that people experience and value wildlife,” said Josh. “Managing wildlife for the public could be enhanced by considering the full spectrum of views people have beyond the positive or negative economic values that so often rise to the top.”