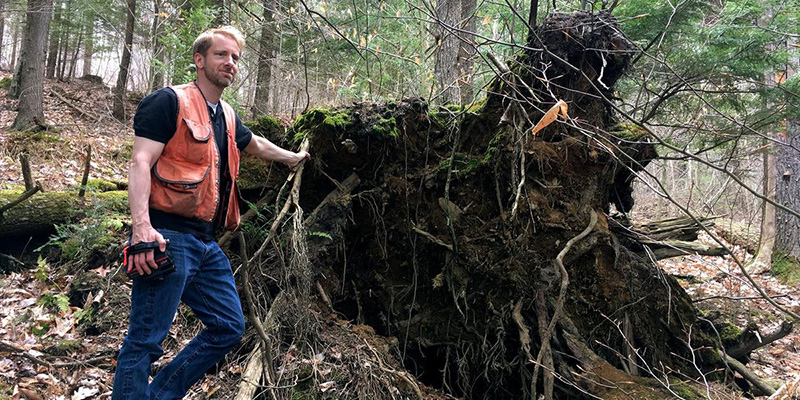 The traditional concept of an old growth forest conjures visions of tall trees; massive, moss-covered logs; and a forest floor teeming with understory plants, animals, and other organisms. Professor Bill Keeton, a forest ecologist in the University of Vermont’s Rubenstein School of Environment and Natural Resources, is experimenting to see if he can accelerate the development of old growth conditions in northeastern forests.

“My goal is to enhance carbon storage as a way to help fight climate change and at the same time generate income for forest landowners from relatively light timber harvests,” said Keeton, who has conducted research and taught forestry and environmental sciences courses in the Rubenstein School for 18 years.

In 2001, he launched the Vermont Forest Ecosystem Management Demonstration Project on two sites in northern Vermont, one on the Mount Mansfield State Forest and one on the University’s Jericho Research Forest. In these northern hardwood-conifer stands, Keeton and his graduate students tested a type of natural disturbance-based silviculture, an alternative forest management approach that emulates natural disturbances. These disturbances, such as windstorms, help to enhance late-successional or old growth structure.

Keeton and his team used a natural disturbance-based method they call “structural complexity enhancement” (SCE) to increase the intricacy of the vertical and horizontal arrangement of trees and plants, both living and dead.

“Forest stands with more complex architecture, containing trees of all ages and sizes, are more resilient and provide valuable habitat for a greater diversity of plants and animals than do stands with less structural complexity,” said Keeton, a faculty fellow in UVM's Gund Institute for Environment.

These new approaches to forest management have also gained attention because of their potential for maintaining high levels of forest biomass and carbon storage. Voluntary and compliance carbon markets, such as the California Air Resource Board Cap-and-Trade Program or the American Carbon Registry, increasingly incentivize, or pay, forest landowners to maintain greater volumes of standing, carbon-storing timber to offset greenhouse gas emissions.

In 2003, Keeton implemented various timber harvest treatments on the study sites, including SCE and traditionally-used selection harvests. In SCE treatments, loggers thinned around larger trees to provide them more growing space in the canopy. They opened small gaps, left more large logs on the ground, girdled trees to create snags, or dead standing trees, and pulled down others to form tip-up mounds.

In earlier work on the Forest Ecosystem Demonstration Project, Keeton reported that SCE enhances elements of late-successional biodiversity, such as salamanders, herbaceous plants, and fungi, while also generating a modest profit from timber harvest under the right site and market conditions. But, a major uncertainty was whether tree regeneration would be sufficient for practical use.

Recently, Keeton and master’s degree student Aviva Gottesman ’16, who also received her bachelor’s degree in the School, observed that SCE successfully regenerated and allowed growth of adequate densities of young saplings for a diversity of tree species.

“Tree regeneration included more economically desirable species, such as sugar maple and yellow birch,” said Keeton. “But, as many foresters in the region have experienced, competition with American beech sprouts was fierce, though actually less severe than in some conventional harvests.” Keeton and Gottesman suggest removing beech where it inhibits desired regeneration.

Overall, Keeton recommends SCE treatments as an effective approach for northeastern landowners to increase carbon storage in managed northern hardwood forests and as an option for capturing supplemental revenue from compliance and voluntary carbon markets.