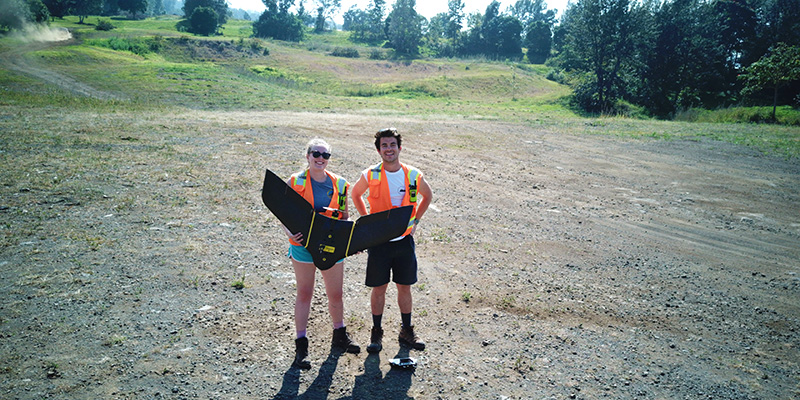 Emma Estabrook ’16 is a research technician and a drone pilot in the University of Vermont Spatial Analysis Laboratory (SAL) in the Rubenstein School of Environment and Natural Resources. Emma recently spent a week in Hawaii, where she acquired imagery to support a water reclamation project on a coffee plantation.

Emma, a native of Bridgewater, Massachusetts, majored in environmental sciences in the Rubenstein School and minored in both geospatial technologies and soil science. Her career trajectory found its course when she took ENSC 130 Global Environmental Assessment taught by Gillian Galford, research assistant professor in the Rubenstein School and faculty fellow in the UVM’s Gund Institute for Environment.

“Gillian introduced us to the hands-on applications of GIS in the course. It was really cool to learn and a great marketable skill to have after graduation,” said Emma, who took advantage of her newfound skill much sooner.

Early in her junior year, she took a part-time job with the SAL, where she started out digitizing land cover maps for 10 to 20 hours a week with 20 to 30 other student employees. She soon joined the Lab’s Unmanned Aircraft Systems (UAS) team and went on drone flights to collect mapping data for the SAL’s many contracted projects with the federal government, municipalities, and private companies.

At first, Emma served as a “visible observer” for the UAS team. Federal Aviation Administration (FAA) regulations require that the UAS team have a visual line of sight of the drone and can communicate with one another at all times. Visual observers are spaced throughout the flight path and communicate via radio with the pilot. Depending on the mission, the UAS team will consist of one to two licensed FAA UAS pilots and two to three visual observers.

In December 2017, Emma was hired as a full-time research technician in the SAL to lead the UAS team. She helps to manage about 10 student employees involved with the team. She also earned her drone pilot license and became the lead pilot of the UAS program in the Lab, which is how she ended up taking her first-ever trip to Hawaii in January 2018.

The SAL, directed by Rubenstein School graduate alum Jarlath O’Neil-Dunne ‘04, is working with Kona Hills Coffee Company, which owns a coffee plantation of 1,800 acres on the main island of Hawaii. Site engineers for the project from the firm Fitzgerald Environmental, founded by Evan Fitzgerald ’07, also a graduate alum of the School, recommended the SAL for the project based on past collaborations to map streams impacted by Tropical Storm Irene.

Emma traveled to Hawaii with Noah Bell ’18, a UVM engineering student who works in the SAL and is also a licensed drone pilot. Once the pair received a tour of the plantation and the use of a company vehicle, they logged long 10-hour days in the field running drone flights, plus hours in the evening processing the data. The team ran 28 flights, lasting up to 45 minutes each and taking close to a thousand photos of the plantation during each flight.

“I feel so lucky to have a job that brings me places I can’t visit otherwise,” said Emma who was able to squeeze in some sight-seeing, including a snorkeling tour.

Upon their return to the SAL, Emma and Noah spent two weeks “stitching” together their drone photos in a software program that turned more than 16,000 individual images of the main plantation site into geospatial data products such as “orthorectified” imagery, elevation surfaces, and 3D models. These products were integrated into an online platform where the coffee company and its engineers are using it to develop a sustainable irrigation system. 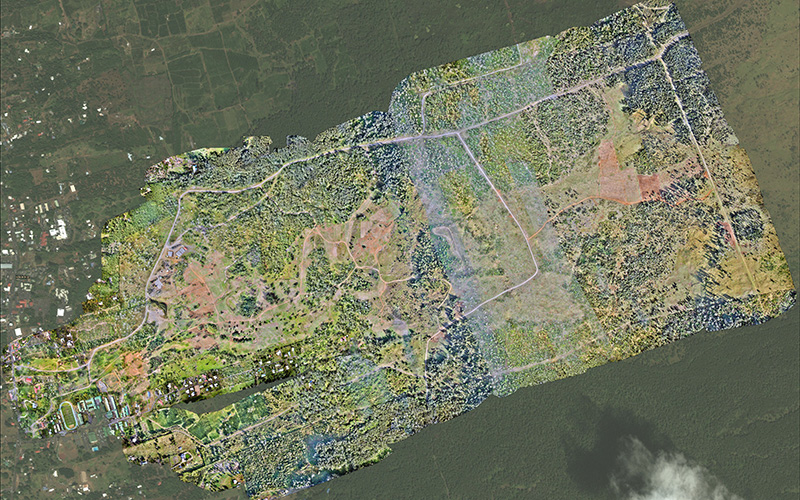 A "stitched together" map of Kona Hills Coffee plantation in Hawaii. Emma and Noah produced the map from thousands of individual images captured from drone flights over the plantation.

“The plantation site is extremely diverse with over 1,600 feet in elevation change, so it was just amazing to see how much the landscape changes in a single area,” said Emma.

The data produced by the SAL is many times more detailed than existing maps of the site. For the first time, the engineering team has the information they need to model the water flow within the plantation. The application of drone technology resulted in better data at a lower cost and reduced environmental impact compared to traditional aircraft or on the ground field surveys.

“I am thrilled with what our UAS team was able to accomplish,” said Jarlath, who has directed the Spatial Analysis Lab since 2014. “I feel exceptionally fortunate in the caliber of students we produce at UVM. Emma and Noah performed outstandingly. Our team at the Rubenstein School has garnered a national reputation for our use of drone technology for environmental mapping.”

“We were not only able to fly drones at a beautiful site, but this project was the largest acquisition of drone data the lab has ever done,” said Emma. “It was such a cool learning experience for me — from flying drones for five days straight in Hawaii to the hurdles of processing such a large dataset.”