Wonder Why Farm Honored As Vermont Dairy Farm of the Year 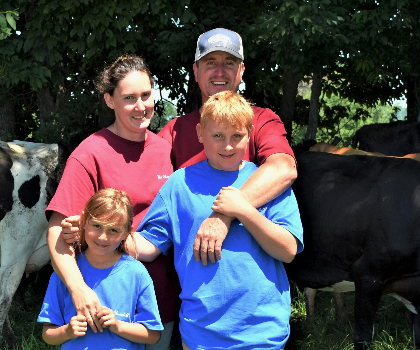 Jennifer and Morgan Churchill and their children Nora and Samuel are all smiles after Wonder Why Farm, their 235-head certified organic dairy farm in Cabot, Vermont, was named the Vermont Dairy Farm of the Year for 2019. (photo: Peggy Manahan/UVM Extension)

Morgan Churchill can sum up his philosophy of farming in two words: "What if?"

The 40-year-old dairy farmer and his wife, Jennifer, own Wonder Why Farm, a 235-head operation on a quiet country road in Cabot, Vermont.  His "What if?" way of thinking has helped them transition from milking 15 cows on his father's farm in 2002 to managing a certified organic herd with around 120 milkers on their current farm, which they first leased in 2005, and later purchased, from his uncle, Walter (Rusty) Churchill.

It also why he's explored innovative ways to improve herd management and produce high-quality milk more profitably and efficiently, such as through installation of robotic milkers in a new state-of-the-art freestall barn.  And it's why he continues to diversify the operation including growing hemp for the first time this year.

This forward-thinking approach recently led to an unexpected honor, that of being named the 2019 Vermont Dairy Farm of the Year. The farm is the third one in Cabot to win this award since it was first given out in 1962. Other winners were their neighbors, the Bothfelds, in 1993, and Jennifer's grandparents, Walter and Sally Goodrich, who farmed in partnership with her Dad, Myles Goodrich, in 1987.

The award is presented annually to an exemplary farm by University of Vermont (UVM) Extension and the Vermont Dairy Industry Association (VDIA), in cooperation with the New England Green Pastures Program. The winner is chosen by a judging committee, comprised of past recipients of this prestigious award, who interview the finalists about their herd, pasture and crop management; milk production; environmental practices; pasture quality; and promotion of the dairy industry, among other criteria.

According to UVM Extension's Tony Kitsos, the awards program coordinator, the judges were particularly impressed that the Churchills were able to take an older, low-input farm and build it to a high-level operation able to support a profitable, sustainable dairy.

"They saw that they put lots of sweat equity into building up their dairy facility with robotic milkers at the center of their goals," he notes, adding that "this year's nominees came from a variety of dairy sectors -- organic, grass-based, value-added and large conventional farms. While each farm had its strengths in certain areas, the Churchills exhibited high achievement in all aspects of the judging criteria."

The couple will be recognized at a banquet at Eastern States Exposition in September, along with the Green Pastures winners from the five other New England states. They also will be the honored guests at the VDIA banquet at the Vermont Farm Show in January.

Both Morgan and Jennifer grew up on dairy farms, developing a love for farming at an early age. It's a love that they are instilling in their children, Samuel, 11, and Nora, 8.

"They started with very little and have been great stewards of their cows, people, money and land to get them to where they are today," says Jason Johnson, Farm Relationship Manager with Stonyfield Organic, who nominated the couple. "Morgan can fix anything including building the new facility, and Jen is a great cow person."

Although Morgan has deep ancestral ties to the property -- he is the fourth generation of Churchills to farm this land -- his approach to farming has been different. While acknowledging that hard work equals success, he also values quality of life and spending time with his children, which is one of the reasons he and Jennifer decided to switch to robotic milking.

In 2010, while still leasing the farm, they remodeled the existing tie-stall barn to milk more cows. Although it was the right solution at that time, retrofitting the barn was not a viable option to accommodate the new milking system. They also wanted to be able to house all their animals under one roof so made the decision to construct a brand-new facility.

They applied for a Dairy Improvement Grant through the Vermont Farm and Forest Viability Program in 2014 and were awarded $40,000. With additional funding through the Vermont Economic Development Authority, they were able to build a new 24,000-sq.-ft. barn for about $400,000 as they did all but the steel framework themselves.

Each 4- x 8-ft. stall in the well-ventilated, freestall barn has sand bedding for cow comfort with bedded pack in the maternity area. To avoid overcrowding, 10 stalls are always left empty. The facility also houses the robotic milking system, providing easy access for the milkers.

"We went with the Galaxy Astrea 20.20 automatic milking system," Morgan says, "and were the first to buy this system in Vermont although the second to have it installed. We needed more flexibility than we had with the pipeline in the tie-stall barn, but this is also less labor-intensive."

They began milking with robotics in 2015, a year after they signed up with Stonyfield Organic in Londonderry, New Hampshire.

Kitsos notes, "To be a farm shipping to Stonyfield means that they are able to maintain very high quality standards on an ongoing basis." The Churchills have received multiple silver awards for excellence from Stonyfield, currently running a 113,000 somatic cell count with extremely low bacteria count.

As to the robotic milking system, the cows seem to love it, says Jennifer, as they can wander in when they're ready to be milked. Less stress means healthier animals and often higher milk production.

"Once the cows learned their time slot for milking, we saw a change from herd mentality to independent thinkers," she adds. "With this set-up they can pass each other in the laneway heading to or from the pasture."

Daily milk production averages around 70 pounds per cow -- or 21,350 pounds per year -- with 3.9 percent butterfat and 3 percent protein. These numbers can be attributed to good management practices, not only for cow comfort and health, but also for selective breeding for year-round calving.

They strive for a 13- to 14-month calving interval, breeding for polled, A2A2, medium-sized cows with good feet and legs and teat placement for the robotic system. Heifers are bred to calve at 24 months and at a weight of 1,000-1,200 pounds.

Calves spend their first several weeks in a separate, well-ventilated area of the barn, which is insulated so temperatures never fall below 35 degrees Fahrenheit in the entire structure. They receive three feedings of colostrum and then get one gallon of milk per feeding twice a day until weaned.

The cows are fed round bales and 18 pounds of grain and two pounds of molasses a day in addition to free-choice sodium bicarbonate, minerals, salt and kelp for better hair condition. The farmers have 295 acres of hay, which provides about 60 percent of their herd's needs, and 120 acres of pasture.

"Morgan and Jen have approached farming with both business and lifestyle goals in mind," Johnson points out. "The addition of the new facility and robotics was part of that approach, but they have also diversified their business in order to accommodate employees year round."

The farmers began sugaring in 2012 to keep their workers employed in the off season. They have 400 buckets and 2,300 taps on pipeline, producing an average of 700 gallons of syrup a year. They've also planted four acres of hemp and have lined up a local buyer for the oil.

Morgan admits, however, that growing hemp involves a lot of labor as it needs to be harvested and dried. "We had to build a 35- x 60-ft. addition on the workshop to dry the hemp." So he's taking a wait-and-see approach on whether they will expand their hemp production next year.

When asked what makes their farm so successful, the dairyman says efficiency.

"We've always looked to the future, always looking for a way to do something better and more efficiently. For example, we bought bigger equipment than we really need to hay. But it helps get the job done quicker, freeing us up to do something else."

"We do what's best for the cows," Jennifer says. "The extra pay for organic milk and the stable prices with Stonyfield allow us to manage our finances better. We try to have loans with payback under five years, and pay cash for equipment whenever we can."

They also credit having good labor as key to their success. Morgan's brother Matt and cousin Joe Churchill handle the crops and equipment. Vicki Ward, the robotics technician, knows the cows and computer system and helps keep things running smoothly in the milking parlor.

"Our biggest strength is found in our partnership," Jennifer concludes. "Morgan and I make a great team. He thinks into the future, and I live in the moment to keep us grounded."