The 4-H sheep delegation to Eastern States Exposition in West Springfield, Massachusetts, poses in front of their barn display. (From left) Jarod Bushey and Raymond Bushey, both from Addison; Gabrielle Ochs, Siri Swanson and Riley Ochs, all from Orwell, and Rebecca Moriarty, Jericho. (photo: Wendy Swanson)

Vermont 4-H'ers also earned the highest score in each of the three age divisions in Skill-a-thon, a competition that tested their knowledge of sheep and the sheep industry. Siri Swanson won the senior division (ages 16 and older), Gabrielle Ochs, intermediate (ages 14-15), and Rebecca Moriarty, the junior division (ages 12-13).

One exhibitor from each of the New England states also was recognized with the Individual Shepherd Award. In Vermont Gabrielle Ochs received this award, given to an individual who demonstrates outstanding teamwork and commitment to his or her 4-H project. The delegates vote by secret ballot to select their state's winner.

For the dairy goat show, the Vermont delegation had the first-place tabletop exhibit. Lillie Tuckerman was named the Vermont Herdsperson as well as was recognized as the Overall Herdsperson Champion for the second year in a row.

The 4-H sheep members and their individual achievements were:

The two dairy goat members who qualified for Eastern States placed as follows: 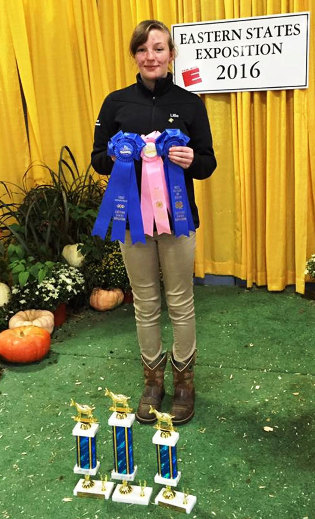 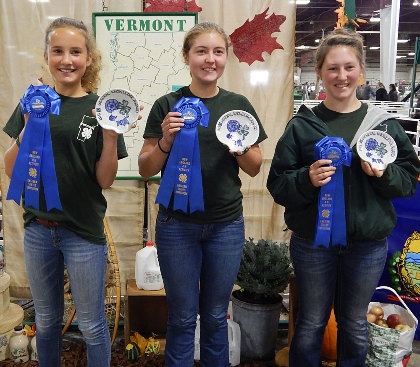