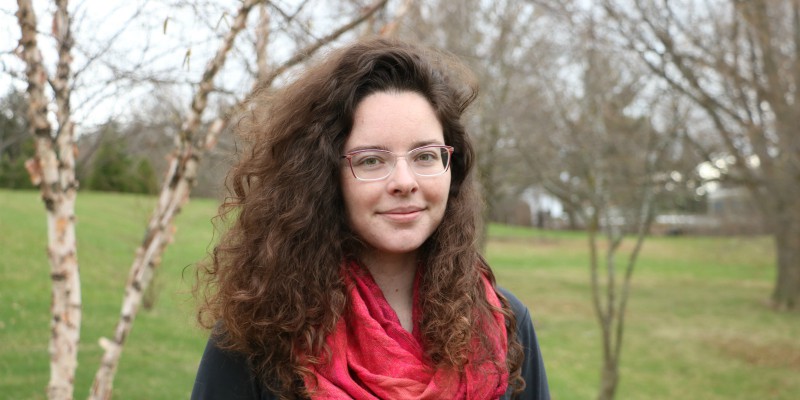 Claire Dumont ’19 brought an adventuresome spirit, a deep curiosity about the world, and an unwillingness to accept convenient answers to complex questions when she arrived at UVM for her first semester.

The mentoring she received from geography faculty, particularly Assistant Professor Ingrid L. Nelson, led to a rewarding independent research project culminating in her Honors thesis. After graduating in May she’ll travel to the Middle East through a Fulbright Research Award to create a cultural guide to the Jordan Trail, a rugged 650-kilometer footpath winding along Jordan’s western border.

Dumont spent parts of her childhood in California and Maine. She developed an interest in backpacking after attending a Girl Scout backpacking camp near Lake Tahoe as a child. She returns to California each summer to hike and volunteer at the camp.

She was initially attracted to UVM by the university’s strong environmental studies program. She shifted her major to geography after taking a course with Nelson that featured a case study in Mozambique. The study described conflicts that arose when a wealthy American philanthropist decided to establish a wildlife conservation program that threatened to displace local farmers.

“I was fascinated by the whole idea of politics of land-use and management,” Dumont recalls. “I met with professor Nelson and asked her ‘how can I do what you do?’”

Who is the land For?

In the summer before her junior year, she was hiking the Bigfoot Trail through Seiad Valley in Northern California when she encountered signs reading “No Monument. K.S. Wild Keep Out.”

Her curiosity piqued, Dumont asked locals what the signs meant and learned about the proposed Siskiyou Crest National Monument. The monument would include acreage where locals and indigenous people have lived, fished, mined, logged, and ranched for generations.

For Dumont, it seemed like a perfect case study examining the complexities of land management. Nelson agreed, and Dumont met with Lily Fedorko at UVM’s Office of Fellowships, Opportunities and Undergraduate Research (FOUR). Through FOUR, Dumont received the Brennan Summer Research Fellowship to finance her ethnographic study.

Dumont spent last summer in several towns along the Klamath River and went back again during winter break to fill in some gaps in her research. Her resulting Honors thesis analyzes how environmentalists’ and hikers’ perceptions of technology in wilderness areas influenced which activities the Monument would allow and which it would forbid.

“One of the things I looked at was hiking vs. ATV riding. The monument proposal claimed that ATVs are a threat to the well-being of the ecosystem, while promoting hiking the Pacific Crest Trail, which winds through the proposed Monument area, as a great, low-impact form of recreation.”

Dumont’s research points out that the technological innovation cuts both ways. Advances in lightweight, waterproof hiking gear and tools like GPS have helped fuel a long-distance hiking boom in the northwest, which in turn leads to increased ecosystem degradation. For some inhabitants, meanwhile, ATV travel is a mode of recreation in a rugged, mostly forested landscape that has only one paved highway. This was a management situation in which “place” mattered.

Her thesis also looks at gold mining on the Klamath River, which she describes as another fascinating set of tensions between preservationists, miners, and the Karuk Tribe.

While deeply invasive practices like hydraulic mining have been banned, local gold miners still depend on “suction-dredging,” a smaller-scale technique. “When I was there, suction-dredging had been banned too,” said Dumont. “The only way you could mine your claim was by panning, but the miners I interviewed said they couldn’t support their families that way.”

“I try to accommodate the different ways of producing knowledge in my research by advocating for a citizen science approach where you actually include gold miners’ perspective instead of trying to prove that section dredging should be eliminated in its entirety,” Dumont says.

The tension over salmon persist from the mid-1800s when European settlement and the Gold Rush displaced many of the Karuk from their aboriginal territory. Current protected area designations in the region continue to limit Karuk’s cultural use of their land. Dumont says that some members of the Karuk Tribe would accept the Monument designation only if it gave them management rights. “They have the tribal infrastructure to do that,” says Dumont.

Next fall Dumont will be exploring other trails on another continent. Her Fulbright project is titled "Walking and Working Landscapes: Creating a Culturally Specific Guide to the Jordan Trail.”

During her sophomore year at UVM she studied in Jordan through a Council on International Educational Exchange (CIEE) program.

“I’d met a woman during my high school gap year who told me about educational programs she led in Jordan,” she said. “I kept that in mind because I always wanted to study abroad in an unfamiliar place and learn the language and culture.”

The Jordan Trail has been trodden for centuries by native Bedouins though it is relatively new as a cultural attraction—it was formally established in 2015. Dumont hiked parts of it during her year in the country. She says most hiking guides highlight only natural features, but her project will focus on human interactions with the trail.

“I’ll be doing an ethnographic study of rural Jordanian land use. Land protection is different there because there are a lot of people who still live in areas where the trail passes through.”

Dumont has other trails on her bucket list. She plans on tackling Vermont’s Long Trail this summer before departing for the Middle East. Further in the future she sees many other potential paths. Eventually she’d like to go to graduate school to continue her studies in geography and nature and society studies.

Kevin Coburn
“I was fascinated by the whole idea of politics of land-use and management. I met with professor Nelson and asked her ‘how can I do what you do?’” - Claire Dumont ’19