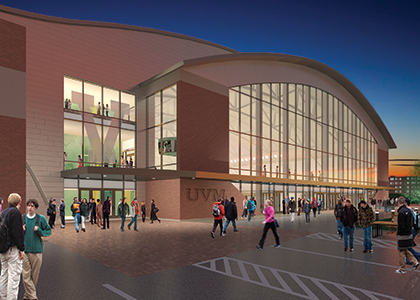 As UVM’s Board of Trustees approves project planning, and multiple alumni step up with financial support, the university’s long-awaited dream of enhanced space for varsity athletic competition and student wellness has taken significant steps forward over the past year.

The proposed Multi-Purpose Center will include a new events center that will serve as the home for men’s and women’s basketball while also hosting a variety of campus and public events. In addition, the project includes a transformational renovation of Gutterson Fieldhouse for men’s and women’s hockey, and dramatic upgrades to the health, wellness and recreation facilities for the entire campus. These upgrades will result in a five-fold increase to the amount of dedicated space available for campus recreation.

At the October 2017 meeting of the UVM Board, members viewed detailed drawings of what the project could be. To move the project design through the next phase, the board authorized UVM to spend up to $1 million, all in private gifts, to finish the design development process and determine a final budget for the new facility. The board received an update on that work at the February meeting, and Bob Vaughan, director of capital planning and management, hopes to present the final plans and budget at the May meeting.

“Feedback from students, alumni, our loyal fans, and the broader community has been incredibly positive,” says Director of Athletics Jeff Schulman ’89. “I’m looking forward to continued work with our trustees, university leadership, and my Athletic Department colleagues to deliver a truly transformational project.”

David Daigle ’89, chair of UVM’s Board of Trustees, and his wife, Beth Daigle ’89, have pledged $1 million to the proposed Multi-Purpose Center. Their gift will be directed toward new facilities that will enhance student health and wellness on campus, as well as programs that encourage all UVM students to lead healthier lives.

The Daigles’ long history of philanthropy at UVM has had a significant impact on each of the four priorities of Move Mountains: The Campaign for The University of Vermont—scholarships, faculty, facilities, and academic programs. They have supported initiatives at UVM including the Grossman School of Business, the UVM Career Center, the UVM Cancer Center, faculty endowments, student scholarships, and more.

The success of UVM’s nationally-acclaimed Wellness Environment, a neuroscience-inspired behavior change program that incentivizes college students to build healthy brains and healthy bodies, played a significant role in the decision to support the Multi-Purpose Center at UVM. The Daigles believe that the Wellness Environment program can have a direct and positive impact on student academic success, which in turn increases the likelihood that UVM students will enjoy successful lives and careers after they graduate.

In December, UVM recognized a landmark era in men’s basketball with the naming of the “Tom Brennan Court” in Patrick Gymnasium. The court-naming opportunity was the result of a $1 million fundraising goal established to both recognize Coach Brennan and advance the planning for the Multi-Purpose Center.

In his nineteen years at UVM, Brennan won 264 games and led the Catamounts to four 20-plus win seasons, three America East Championships, and UVM’s first three NCAA Tournament appearances. The breakthrough to March Madness run was capped by the 2004-2005 season and the Cats’ stunning upset win over Syracuse.

Barry Stone ’56—a former UVM basketball player and member of the UVM Foundation’s Leadership Council—and his wife, Carol, made a lead gift to launch the fundraising effort and other donors joined in to make the Brennan Court a reality.

The “Tom Brennan Court” will remain as the centerpiece in Patrick Gym after it is renovated into a recreational gym for all UVM students. As part of the Multi-Purpose Center project, the court in the new basketball and events arena will be available for a naming opportunity.

DELIVERING ON OUR PROMISE

A gift of $1 million from Bill Shean ’79 and Laurie Shean ’80 has provided critical support for producing architectural plans of the Multi-Purpose Center, as well as site evaluation and preparation.

The Sheans are longtime UVM supporters with a special interest in athletics. Bill, a former member of the UVM tennis team, is the managing director of investments at CYS Investments, an agency mortgage REIT located in Waltham, Massachusetts. Laurie is a nurse practitioner at Massachusetts General Hospital in Boston.

Given their long history with UVM Athletics, the Sheans have significant experience with previous plans to renovate or expand athletic facilities on campus. “This is the first time, in my heart and in my head, that I believe that we will finally get the Multi-
Purpose Center completed and deliver on our promise to give varsity athletes as well as our entire student body the facilities that they so richly deserve,” says Bill Shean. “We have an incredibly active group of students and they deserve a top-notch center to exercise, train, practice and compete.”

As this issue went to press in February, there was a lot on the horizon for UVM Athletics—conference tournaments, possible March Madness berths, and the 2018 NCAA Skiing Championships in Steamboat Springs, Colorado. Keep up with the Catamounts at uvmathletics.com.

Men’s basketball continued their winning ways despite an early-season injury to key player Anthony Lamb. Ernie Duncan (pictured) has been among the players who have taken up the slack, helping lead the Cats on a nine-game winning streak to open the America East schedule. During the non-conference slate, Vermont earned a road win at Richmond and battled perennial powerhouse Kentucky, then ranked #4, to a four-point loss in Lexington.