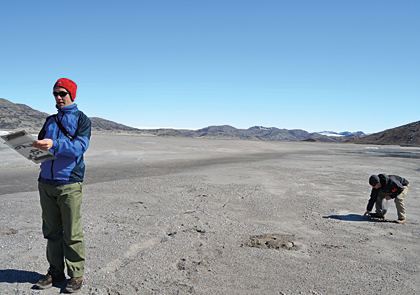 Every mountain and hill shall be made low, declared the ancient prophet Isaiah. In other words: erosion happens. But for the modern geologist a vexing question remains: how fast does this erosion happen?

For more than a century, scientists have looked for ways to measure and compare erosion rates across differing landscapes around the globe—but with limited success.

“Knowing the background rate of erosion for a place is extremely important,” says UVM geologist Paul Bierman, “if you want to compare it to what’s coming off the landscape today because of human impacts like agriculture, development, and forestry.”

Since the mid-1980s, measurements of a rare radioactive element—beryllium-10 that appears in quartz bombarded by cosmic rays in the top few feet of Earth’s surface—have greatly improved geologists’ ability to estimate erosion rates. But these experiments have been done on a local or regional scale, using a variety of methods, calculation constants, and corrections. Comparisons between climate zones and differing rock types have been difficult—cutting off a global perspective.

Now Bierman and his graduate student, Eric Portenga, have taken twenty years worth of this disparate data, compiled 1,599 measurements from eighty-seven sites around the world, and recalculated it with a single, up-to-date method.

Their work, “provides the first broad, standardized view of pre-human, geologic erosion rates,” they write in “Understanding Earth’s eroding surface with 10Be,” published in the August edition of the journal GSA Today.

“Nobody has stepped back far enough to look at this big picture,” says Bierman, “we all work on our little postage stamps of the world—Africa, South America, the western United States.” But many of the pressing questions about erosion are global in scale.

Most urgent, the ability to support the nine billion people forecast to be living on Earth by mid-century rests directly on the resiliency of soil systems and the health of water supplies. And these two pillars of sustainability are directly and deeply affected by erosion.

The method used in this new study can provide a good tool for measuring the sustainability of modern agricultural practices, Bierman notes, since the beryllium-10 data shows the rate at which landscapes have been changing in the recent geologic past: the last thousand to several-hundred-thousand years. “If human impacts result in rates faster than we measure, it’s non-sustainable,” he says.

Portenga sees how this study can help managers in contested landscapes like the Chesapeake Bay. “Regulators may want to stipulate an ideal amount of sediment coming out of a river system and they may say that they want to get this back to ‘normal’ standards or ‘normal rate.’ But what is that rate? What was the erosion like before people started interacting with the landscape?” he says.

Not being able to answer that question well has contributed to many regulatory conflicts. “This work can help give a better idea of what is normal,” says Portenga, who was the lead author on the study.

Using several statistical tests, Portenga and Bierman were able to explain about sixty percent of what controls differing erosion rates in drainage basins around the world. But their study only explains about thirty percent of the variability between outcrops of bedrock. “This means geologists are missing a lot of the crucial information about what is controlling bedrock erosion,” Portenga says.

Little-studied variables—like the density of fractures in bedrock, the strength of rocks, and their chemistry—may be controlling erosion rates, the study suggests.

“I don’t think we’ll ever find the single smoking gun of erosion,” says Portenga, “the natural world is so complex and there are so many factors that contribute to how landscapes change over time. But as this method develops, we will have a better sense of what variables are important—and which are not—in this erosion story.”

For example, it has been a truism of geology for decades that rainfall is the biggest driver of erosion. Semi-arid landscapes with little vegetation and occasional major storms were understood to have the greatest rates of erosion. But this study challenges that idea. “It turns out that the greatest control on erosion is not mean annual precipitation,” says Bierman. Instead, look at slope.

“People had always thought slope was important,” Bierman says, “but these data show that slope is really important.”

Their new study, supported by the National Science Foundation, is part of a larger long-term goal of creating a global model that can predict the background rate and patterns of erosion across the whole planet—and how these erosion rates will respond to changes like human-induced climate change.

“Following this study, we can start to answer big questions like, ‘how does climate drive erosion?’” says Bierman. In other words, a clearer picture of what global erosion has looked like in the recent past will start to illuminate what is likely to happen in the future as human impacts and land-use decisions play out.

“We want a predictive model,” says Bierman, “we want to be able to have somebody say, ‘here’s my drainage basin, here’s the climate, here’s the rock type, here’s the slope, here’s the mean annual precipitation: how quickly is this eroding?’ That’s what you need for land management.”