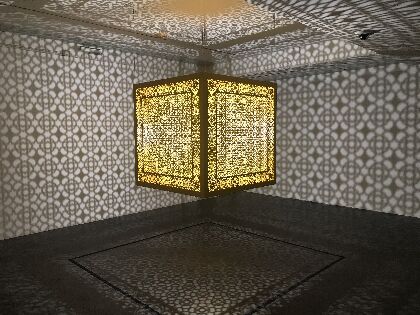 Burlington, VT–Burlington City Arts and the University of Vermont host internationally-renowned contemporary artist Anila Quayyum Agha at 301 Williams Hall, the University of Vermont on Wednesday, January 29 at 5:30 pm. The award-winning artist discusses her artistic practice and newest work, Hidden Diamond – Saffron, featured in BCA's exhibition Transcendent. This event is free and open to the public.

Anila Quayyum Agha is a cross-disciplinary artist who explores global politics, culture, religion,
and social and gender roles in her multimedia artworks. Her work has a simultaneous sense of alienation and transience, influenced by her experience with the boundaries between Islam and Christianity as well as the different cultures of Pakistan and the United States.

The beauty of the Alhambra mosque in Spain led the artist to reflect upon her childhood in Lahore, Pakistan, where women were excluded from the mosque and instead prayed at home. Consequently, she created an interactive experience of patterns and light inspired by complex, interlacing designs found in Islamic art.

Agha’s installations allow one to reflect upon personal experiences of alienation and belonging, and this reflection becomes a part of the works themselves. Agha received a BFA from the National College of Arts, Lahore, and an MFA in Fiber Arts from the University of North Texas, in 2001. She has had solo exhibitions in the United States, the United Arab Emirates, and Pakistan. In 2014, she received the two top prizes at ArtPrize 2014, the international art competition held in Grand
Rapids, Michigan. Agha lives and works in Indianapolis, Indiana and is represented by the Sundaram Tagore Gallery in New York, NY.

This artist talk is presented in part by the Mollie Ruprecht Fund for Visual Art and the UVM Department of Art and Art History, University of Vermont.

Transcendent: Spirituality in Contemporary Art is made possible in part by the support of Izdahar.