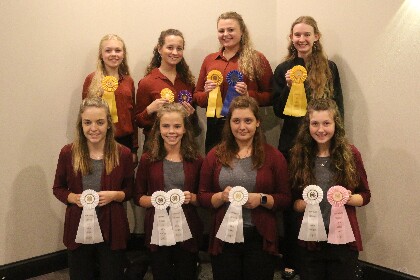 Burlington--Vermont 4-H had a strong presence at the Northeast Regional 4-H Horse Contest, Oct. 27 in South Windsor, Connecticut, with 29 youths taking part in the various competitions.

The annual event serves as a warm up for delegates competing at Eastern National 4-H Horse Roundup in Louisville, Kentucky, in November. It was open to 4-H'ers from the six New England states and New Jersey.

Nomad's Adventure Center was the venue for the quiz bowl, hippology and communications contests and the oral reasons part of the judging contest. The latter included public speaking and individual and team presentations.

Two Vermont teams competed in each contest. 4-H'ers on the A Teams earned a spot on the delegation heading to Roundup. B Team participants excelled at state horse events this year but did not make the cut for Kentucky.

The B Team took fifth overall with a fourth-place finish in team problem solving and fifth in judging, stations and the written phases. Competing on this team were Addie Boutin, Essex Junction; Tanya Wheeler, Wilmington; and Ella Dubin, Northfield, Massachusetts, a Windham County 4-H club member, who was fifth-high individual in the judging phase.

In the communications contest Chelsea Carcoba, Danville; Eva Joly, Essex Junction; and Jasmine Mooney and Katherine Stone, both from St. Johnsbury; represented the state on the A Team, which finished first overall. Chelsea came in first in individual presentation and Eva third in public speaking. Jasmine and Katherine were third with their team presentation.

B Team members were Hailee Blades, Jeffersonville, who took second in public speaking and Colt and Wisteria Franklin, Lyndon Center, who were fifth with their team presentation. The team was fourth overall.

For information about the University of Vermont Extension 4-H horse program, contact Wendy Sorrell at wendy.sorrell@uvm.edu. 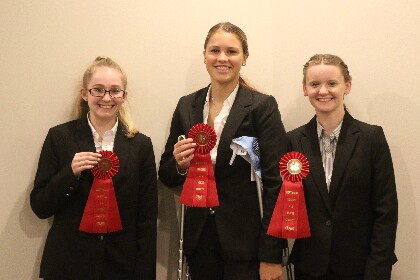 Members of the Vermont B Judging Team that finished second in competition were (left to right) Olivia Campbell, Randolph, and Vivienne Babbott and Emily Lang, both from Hinesburg. (photo: Amanda Turgeon) 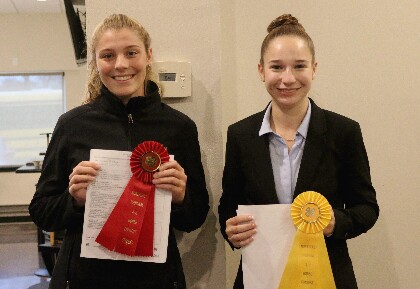