LISTSERV is an email list management software that provides everything you need to manage all of your opt-in email lists, including email newsletters, announcements, discussion groups, and email communities.

For more advanced instructions not detailed in this guide, please see the LISTSERV Documentation and Manuals page.

LISTSERV Logins use an Email Address

Theses guides are intended for users looking to subscribe or unsubscribe from a List. If you are are a List Subscriber seeking other guides, please use the LISTSERV List Subscriber’s Manual provided by L-Soft. 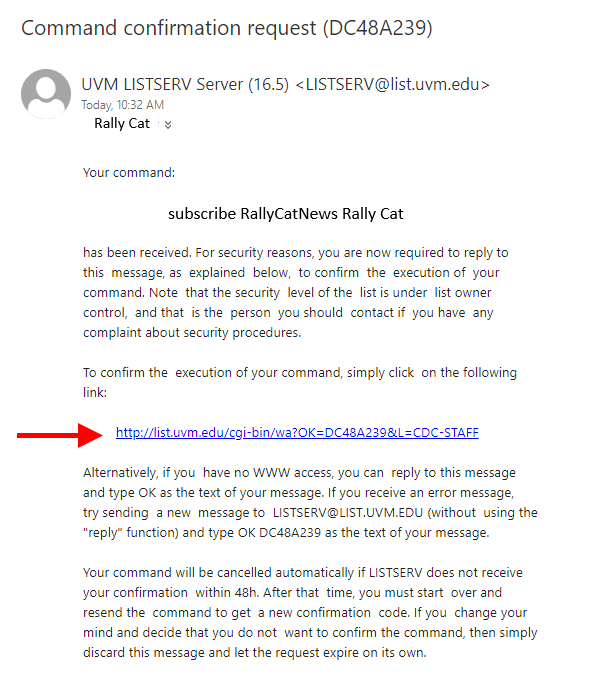 This option only works if the address from which you are sending the email command is the same as the one receiving the list emails.

Unsubscribing from Several Lists by Email

This option only works if the address from which you are sending the email command is the same as the one receiving the list emails.

These guides are intended for List owners and administrators. If you are are a List Owner seeking other guides, please use the LISTSERV List Owner’s Manual provided by L-Soft.

Students looking to request the creation of a new list can fill out this form: https://www.uvm.edu/it/forms/create-student-electronic-mailing-list

Staff and Faculty may use this form to request creation of a new list: https://www.uvm.edu/it/forms/create-electronic-mailing-list

It can take up to several days for a request to be processed and approved. Once a request is approved, you will receive a confirmation email containing a link to your new list.

There are several ways to add subscribers to your list. Depending on the design of your list you can add the subscribers manually, or you can allow the users to add themselves by mailing the list directly. 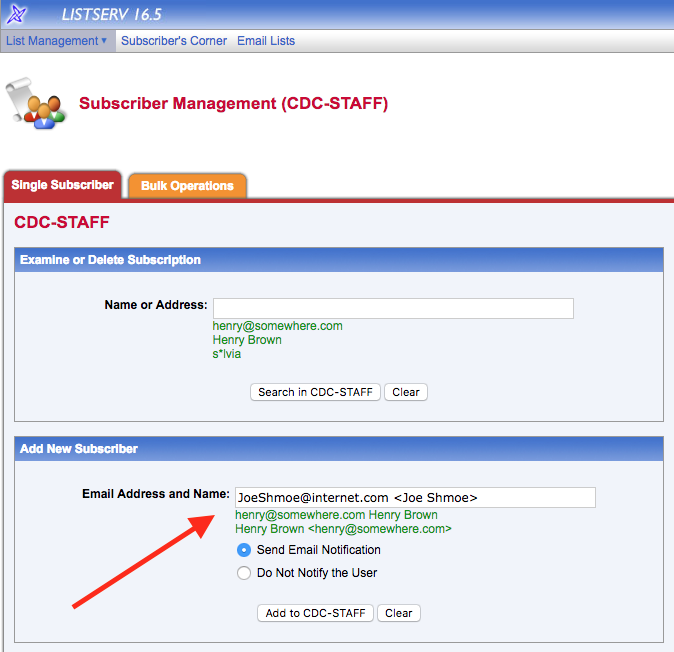 Warning about Adding Subscribers In Bulk

When importing a new list you have the option to remove all current subscribers. There is no option to recover those emails once deleted.

To add a large number of subscribers to a list, create a spreadsheet with a list of emails, first names and last names. Once your list of emails is complete, export the spreadsheet in MS-DOS or Windows text format. Then upload that file to LISTSERV using the Bulk Operations menu. Uploading a Subscriber Text File is the best way to add or remove a large number of subscribers.

The easiest way to create a subscriber list is in a spreadsheet. Use the first column for the e-mail address, the second for the first name, and the third for the last name.

The Daily Threshold option prevents users from repeatedly messaging the LISTSERV by limiting the number of times in a day a user can send messages to the LISTSERV.

The Daily Threshold option is under the Distribution tab. If you leave this field blank, then no limit will be applied on how many messages a user can send in a day. 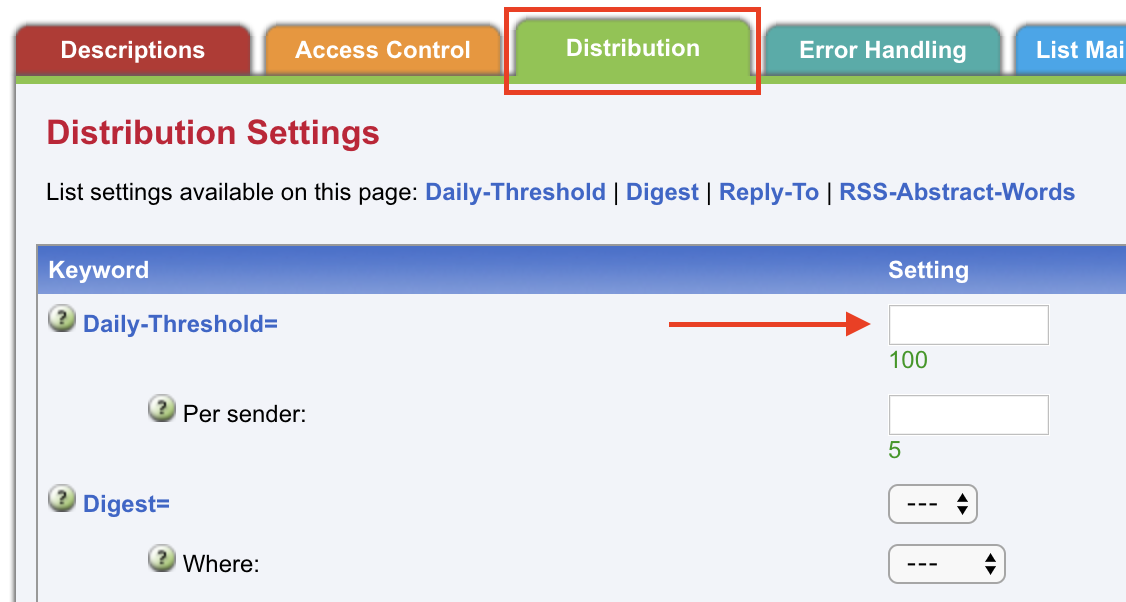 The Confidential option makes your list unlisted for all users excluding known subscribers, but, will still allow subscriptions if the user subscribing knows the list name. Additionally, this function also prevents the list from being probed externally with the “list” command.

In the Security tab under List Configuration, select the “Confidential” dropdown. The “No” option will make the list public to unknown subscribers.

Attachments: Controls what attachments users can email to the list.

Review: The Review option permits specific users to review emails sent to the list before they are sent to everyone on the list. The user can then authorize or reject the message being sent to the list. Any role can be set as a Reviewer.

Send: Moderates settings for emails sent to the list.

Lists have four roles and two list protocols that can be modified to grant levels of access to your list. While each role can be modified they each have unique properties that make some roles superior in access/control to others. Below is a diagram to organize the access that each role is inherently permitted. 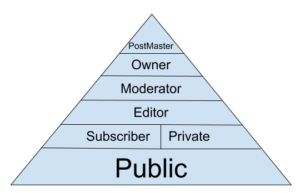 However, each role does have specific powers.

The Postmaster role is a role assigned to Administrators for the LISTSERV site as a whole. If you create a List, you will not have access to this role. Instead, you will be granted the role of “Owner.”

The Owner has access to all parts of their list even when not specified; this allows them to properly manage the list without locking themselves out of a certain function such as sending to the list. The Owner can grant roles to other users and moderate the various role abilities.

The Moderator role has advanced access to editing the list. Most options available to the Owner role will be available. However, Moderators are more limited in their control of the list. Unlike the other roles which can be clicked on and added directly, you have to go to the List Maintenance tab to add a user to the Moderator role.

The Editor/Service role is very malleable and can be set by the Owner to handle specified permissions. For this reason, they have the highest access in the sending and receiving area, only surpassed by that of the list owner.

Public and Private are classified as roles, but instead, function as protocols and adjust how the list behaves on a broader scale than the above roles.

The Public protocol allows all users, if subscribed or not, to make emails and send them to a list. By adding it to the review area, it will force all users to review their email before they send it.

In order to change the owners of a list, a current owner of the list will need to follow the below instructions.  If you believe that a list’s ownership should be changed, and are unable to reach the list’s current owner, please contact the Tech Team for assistance.

Not the solution you were looking for?
Don’t worry we’re here to help!
Submit a Help Ticket

Not the solution you were looking for?