History of the UVM Faculty Senate

History of the UVM Faculty Senate

The following overview of the History and Accomplishments of the UVM Faculty Senate was presented by Chris Burns, Chair of the Research, Scholarship and Creative Arts Committee, at the September 2015 Faculty Senate Meeting.  This history was drawn from the chapter “The Faculty Role in University Governance” written by Beal B. Hyde, in UVM’s Bicentennial History, as well as an email written by David Dummit to the Faculty Senate Executive Council in 2014 regarding a question about the history of the Faculty Senate. Chris provided a sense of the history, and what the Faculty body can accomplish, how our role in the governing structures has changed over time, and how many of the existential questions of the role of faculty in university governance have continuously been revisited over time.  Some have improved as we have found ways to engage, and some have gotten more difficult as the modern university becomes increasingly more complex.

A Brief History of the Faculty Senate at UVM

Before the Faculty Senate

Faculty meetings date back to at least as far as 1827.  James March was President at the time and there were four other faculty members.  They met and discussed all matters relating to students at UVM, including grades, discipline as well as what time breakfast was going to be, evening prayers, university calendar, admissions, and what collections were going to be in the library.  Faculty committees came into existence before the Senate itself in the late 19th century when Mathew Buckham was President of the University.  Four committees were established to address the issues of various departments.  The four earliest departments at UVM were Agriculture, Arts & Sciences, Engineering and the College of Medicine.

By the time Buckham ended his tenure as President in 1910, the committee structure had expanded to twelve committees.  In 1911, President Guy Benton established the first University Senate at UVM, which wasn’t necessarily a body of the faculty, it was established by the President and presided over by the President.  The faculty played a role, but not a large role in the governance of the University.  The number of committees grew to 20 by 1940.  During the 1940’s the Senate got into more substantive issues outside of curricular affairs.  Starting in 1942 with the formation of the policy committee.  This was a major change, bringing faculty more into the loop on policy, personnel and budget matters.  The first major action of the Policy Committee was to submit a plan on retirement and pensions to the Board of Trustees, which was adopted in 1943.  The senate committee structure was reduced at this point, shrinking down to twelve, and the membership became almost entirely faculty, where previously five committees contained no faculty members.  All committees had faculty, and only three had staff and administrative personnel represented at this point.  Based on the work of the AAUP nationally, the Senate in 1943 enacted its first policy on Academic Freedom and Tenure.  This policy was put to the test in 1953 with the case of Alexander Novikoff from the College of Medicine who was called to testify in the U.S. Senate about alleged ties to the Communist Party.  He refused to testify and a number of reviews of his status at UVM came through a joint faculty-trustee committee voted to retain Professor Novikoff, but ultimately he was dismissed from the University.  In reaction to that in 1954, the Senate created a procedure for termination with cause, which was included in the first faculty handbook in 1954.

It wasn’t until 1966 that the Senate had bylaws that defined membership, specified committee structure and established town meeting style format for Senate meetings, which meant that the meetings were open to all faculty members of the University and all faculty could vote.

The University was changing pretty significantly from 1960-1970.  Enrollment of undergraduate students increased from about 3,500 students to about 6,000 students, and more faculty, support staff and professional administrators.  The Senate changed the bylaws in 1970, removing the University President as chair of the Senate.  William White was the first elected chair in 1970.

Formation of the modern day Faculty Senate at UVM

The formation of the modern day Faculty Senate began in 1972.  The Policy Committee was split into the Academic Policy Committee, the Financial Policy Committee and Administrative Policy Committee.   The Administrative Policy Committee didn’t last, and only survived until 1977 when it was split into Faculty Affairs and Academic Affairs, which although today have different names, remain the main substantive bodies of the Faculty Senate.   In addition to organizational change during this period, the Senate also developed new language to regulate dismissal of faculty under conditions of financial stringency, proposed a faculty ombudsman and grievance procedure and advocated for the addition of non-voting members of the faculty committees of the Board of Trustees.  Hide, in his chapter in the UVM Bicentennial History, described the role the Faculty Senate often plays in his description of the grievance system, “A faculty initiative carefully thought out by an ad hoc committee, ironed out with the administration, and made legally binding in the officer’s handbook.  As a Faculty Senate body, we may not always have the ability to act alone, but we do have the ability to act and to lead new initiatives”.

With the advent of the union in 2001, there was a major restructuring and change.  Faculty Senate President Jean Richardson tasked David Dummit with directing a representative Faculty Senate structure.  That was approved by the Board of Trustees in 2002, and is the structure that we have today.

A few highlights of the accomplishments of the Faculty Senate:

·      2007-2008 -  The establishment of the University Manual and Non-Unionized Faculty Handbook replaced the old Officer’s Handbook.  A major revision of the Green Sheets format.  The faculty mentoring program was revised and given new life. 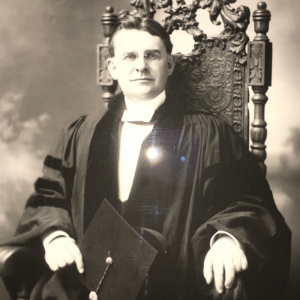 Presidents of the Faculty Senate