The Davis Center is not just a building — its the center of our campus; originating from a strong sense of shared values and a common ground:

Our history is short (10+ years and growing), but the history of welcoming and responsible student centers at UVM is a proud one. Our values and history are what we're all about; we hope you'll share our pride and excitment in carrying these ethos forward, well into the future.

Who is Dudley H. Davis? 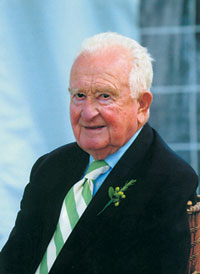 The Davis Center is named for the late Dudley H. Davis (UVM '43) whose families and friends donated $7 million to the project.

Dudley H. Davis was a straight-shooting banker who began his career as an assistant cashier at Merchants Bank in 1946 and retired in 1994 after a phenomenal 36-year run as its president. Over that time, he provided the financial backing that gave rise to some of Vermont's biggest business success stories, including IDX Systems Corp. and Ben & Jerry's.

He was also a generous benefactor of the University of Vermont. Davis died on November 29, 2004, just days after his children announced a commitment to name the University's new student center the Dudley H. Davis Center in their father's honor.

The Davis Center is STUDENT FOCUSED, complements the University's ACADEMIC MISSION, celebrates and supports SOCIAL JUSTICE and is a community-centered ENVIRONMENTAL college union.