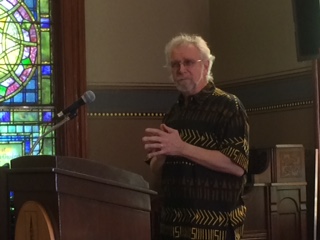 Through his scholarship, teaching and service, Bill Mierse has made important contributions to international studies here at UVM.  His courses have exposed students to art from a number of different regions, cultures and historical periods.  This includes the art of Central Asia, Greece, Ancient Rome, Medieval Europe, and Pre-Columbian Latin America.  In addition, Bill has contributed to UVM’s TAP program, teaching classes focused on the Silk Road and more recently developing a class that asked students to consider “Why Build That?” Through this, students worked to understand the societal, economic, aesthetic, practical and personal factors that have informed architectural choices.  Bill has also led and lectured on international tours, most notably for the Vergilian Society’s 2003 trip to examine archeological sites in Spain.  He also served as a visiting professor in Brazil.

Bill is an art historian. His areas of scholarly production and interest are in Greek and Roman art and archeology, particularly in the western Mediterranean region and the ancient Near East. His emphasis is in the Bronze Age (4,000 to 3,000 B.C.) and Iron Age (beginning before 1,000 B.C.). He was awarded UVM faculty grants for participation in a symposium on art in the Dunhuang Caves (western China), research in Israel, and in Andean countries for pre-Columbian art. His books include: Temples and Sanctuaries from the Early Iron Age Levant, Recovery after Collapse (Eisenbrauns: Winona Lake, IN, 2012); Ocho Ensayos sobre al Arte Romano (Revista do Museu de Arqueologia e Etnologia, Universidade de Sau Paulo, Brazil, 2000, co-author); and Temples and Towns in Roman Iberia: The Social and Architectural Dynamics of Sanctuary Designs from the Third Century B.C. to the Third Century A.D. (University of California Press, 1999). Bill is also the author of an impressive collection of articles, as well as reviews and a dictionary on topics of art history, archeology, numismatics, and art pedagogy.  Most recently, Bill was awarded Richard and Pamela Ader Green and Gold Professorship.  This will allow him to undertake an in-depth study of ancient Central Asia.

Bill has also contributed to international studies through his service activities at UVM. He served as director of two regional studies programs, the Middle East Studies Program (1995-1997) and the Latin American Studies Program (1998-2000).  He was also curator for the 1999-2001 “Four Honduran Artists” exhibit beginning at UVM and touring to Texas, Maryland and New Jersey, as well as curator or co-curator for three other exhibits.  On top of all this, Bill remains centrally involved in efforts to promote interdisciplinary at UVM, a project that is of central concern to the Global and Regional Studies Program.