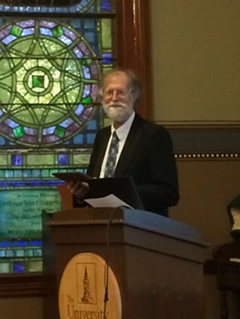 Dennis Mahoney, Professor of German, was the recipient of the 2014 Robert V. Daniels Award for Outstanding Contributions to International Education. Dennis joined UVM in 1979 and attained the position of full professor in 1994. Over the last 35 years, through research, teaching and service, he has been a leader in building and advancing international studies at UVM. Dennis’ classes in the Department of German and Russian Studies have included upper-level courses that have allowed students to explore German Romanticism, the works of luminaries such as Richard Wagner, Friedrich Schiller and Heinrich von Kleist, and the interactions between literary development and events such as the French Revolution and the rise of German nationalism. Dennis has also taught Area and International Studies classes and in the TAP program with a course exploring literature from the Enlightenment to Nazism. He was honored with UVM's 2001 Kroepsch-Maurice Award for Excellence in Teaching.

Dennis’ has a truly impressive record of service, activity and outreach in international studies. One central element of this has been his work with residentially based education. As a Dennis Mahoney and Peter VonDoepp newly minted Assistant Professor, Dennis was tapped to serve as faculty director of the German House, and he and his spouse Angi resided in an apartment in the Living/Learning Center for several years. In 2005 Vice President Lauck Parke and John Sama asked Dennis to help conceptualize a new idea - the creation of Residential Learning Communities (RLCs). Dennis was an important contributor on the first team that developed the framework for RLCs and went on to serve as Faculty Director of the Global Village RLC for its first two years (2006-2008). "D-Mo," as students affectionately called him, was the perfect person to launch this initiative, and to get students excited about participating. Dennis' strengths as director included bringing UVM faculty into this community to engage with students, providing cultural and artistic programming, supporting international exchange students and UVM students who wanted to study abroad, and linking the Global Village with local and regional organizations with a global focus.

Beyond this, Dennis served as the Interim Director of the European Studies program in 1997-98, the Director from 2000 to 2005, and the Acting Director in 2011. From 2006 to 2008 he served on the committee that laid the groundwork for the development of the Global Studies program at UVM. He has offered public commentary for Lane Series events and organized Burack lectures in 2006, 2007, and 2011. Finally, since 1994, Dennis has served as UVM coordinator of our student exchange program in Augsburg, Germany.

Dennis’ scholarship has focused on the works of Goethe, Novalis, Schiller, and other authors of the Age of Goethe. He is author or editor of seven books and has published forty articles and chapters and nearly ninety book reviews on areas of his scholarly expertise. His book, Roman der Goethezeit, brought him national and international recognition. This is also the case for his three books on the German Romantic writer Novalis, two written in German and one in English. His book on The Critical Reception of Novalis' Novel Heinrich von Ofterdingen was named one of Choice magazine's "Outstanding Academic Books for 1995." In his most recent project, he served as editor of The Literature of German Romanticism (2004), part of the 10-volume Camden House German Literature series that represents the most detailed history of German Literature in English. Since 2012 he has been serving as the President of the International Novalis Society and is the first non-German to do so. 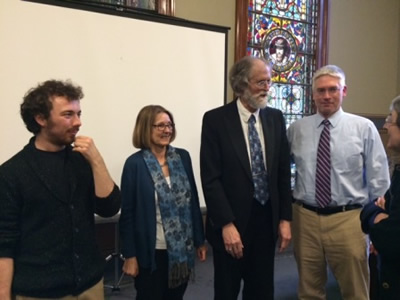