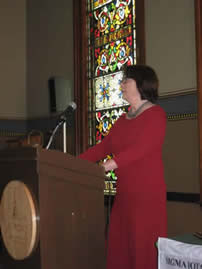 Denise Youngblood, professor of history, received her Ph.D. in 1980 from Stanford University and after working for six years at the American Association for the Advancement of Slavic Studies, came to UVM in 1988 as an assistant professor. She received tenure in 1994 and was promoted in full professor in 1999. She has served as chair of the History Department and Vice Provost for Faculty and Academic Affairs.

Denise is a prominent scholar of Russian film, with six single or co-authored books, including the prize winning Movies for the Masses: Popular Cinema and Soviet Society in the 1920s, winner of the Heldt Prize for Best Book by a Woman in Slavic Studies, and numerous peer reviewed book articles and chapters. Prof. Youngblood

We also recognize Denise as a renowned teacher and mentor, who has impacted many students in her home department and across the college, earning numerous distinctions, including University Scholar Award, Dean’s Lecture Award, and Kroepsch-Maurice Award for Excellence in Teaching.

She has been a major pillar in our Russian/East European Studies program, for which she served as its director in the 1990s and whose courses are central to that program. She has also been a major supporter and participant in the life of our international studies community more broadly, including having served on the committee that designed the Global Studies major. We value her contributions greatly.