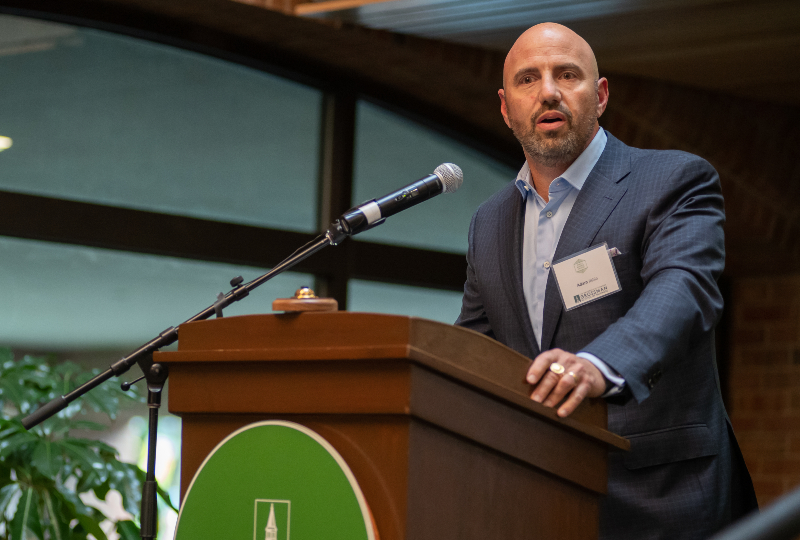 A buzz of excitement filled the air as the Grossman School of Business community celebrated the completion and opening of the Business School’s Ifshin Hall expansion with an official dedication ceremony on Thursday, October 4, 2018.

The ceremony was graced with the presence of noted alumni, dignitaries, the school board of advisors, university faculty and foundation, UVM’s senior administration, Alumni Association Board of Directors and Foundation Board, students, staff and members of the Ifshin family, during which keynote speaker Adam Ifshin noted the symbolic relationship between the new addition that bears his family name, and the schools existing Kalkin Hall; namely that both are based in real estate, albeit one as a landlord and one a tenant.

The ceremony was especially poignant due to the presence of Eugene and Joan Kalkin, after whom Kalkin Hall is named.

The 25,000-square-foot Ifshin Hall, named for the late Steve Ifshin, is completely funded by private donations, many from Grossman’s advisory board, who were recognized at the ceremony by the University of Vermont Foundation’s Board of Directors chair, Jim Keller.

UVM President Tom Sullivan also acknowledged the financial contributions of donors, and praised Steve Ifshin, class of 58, who as the former co-chair of the Grossman School of Business Board of Advisors and member of the UVM Foundation Board of Directors, used his own considerable, commercial real estate experience to help plan and drive the construction. Sullivan noted “Many alumni and friends invested in Ifshin Hall, and they did so because they trust that the Grossman School of Business is a great venture.” He continued “They know that by putting their philanthropic dollars to work in here, they are going to help make a real difference out there for a long time to come.”

Grossman Dean Sanjay Sharma in his remarks, also spoke to the immeasurable contribution Steve Ifshin made to the project and their common vision for the building. “As the co-chair of the Grossman advisory board, Steve became a champion for the vision. His energy, tenacity and experience, supported by the quiet diplomacy of Jim Keller the other co-chair, helped make that vision come true.” 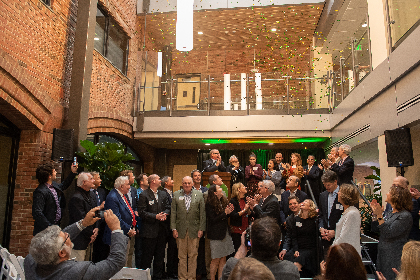